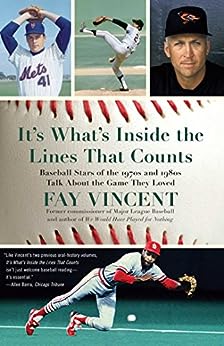 It's What's Inside the Lines That Counts: Baseball Stars of the 1970s and 1980s Talk About the Game They Loved (Baseball Oral History Project Book 3) Kindle Edition

Fay Vincent is a former entertainment and business executive who served as the commissioner of baseball from 1989 to 1992.  This volume is the third in a series drawn from his Baseball Oral History Project. The previous two volumes, The Only Game in Town and We Would Have Played for Nothing, include ballplayers’ reminiscences of the 1930s and 1940s, and the 1950s and 1960s, respectively. --This text refers to an alternate kindle_edition edition.

3.3 out of 5 stars
3.3 out of 5
4 global ratings
How are ratings calculated?
To calculate the overall star rating and percentage breakdown by star, we don’t use a simple average. Instead, our system considers things like how recent a review is and if the reviewer bought the item on Amazon. It also analyses reviews to verify trustworthiness.

Rick Shaq Goldstein
4.0 out of 5 stars RICK "SHAQ" GOLDSTEIN SAYS: "70'S & 80'S VERSION DOESN'T MEASURE UP TO 50'S & 60'S"
Reviewed in the United States on 25 March 2010
Verified Purchase
This is the third installment of interviews transcribed to words with people from the baseball industry. Note: In addition to ballplayers this volume includes men whose fame came from managing not playing... an umpire... and a union organizer. Though the "author" says they "tried to faithfully record the comments of the interviewees, correcting minor grammatical mistakes and occasional errors caused by the inevitable lapses of memory after several decades"... the wordsmith's involved did not do near as good a job as they did in the prior volume "WE WOULD HAVE PLAYED FOR NOTHING" which was a classic.

The chapter subjects are Willie McCovey (Hall of Fame player)... Juan Marichal (Hall of Fame player)... Dick Williams (mediocre player, Hall of Fame manager)... Earl Weaver (Hall of Fame manager)... Tom Seaver (Hall of Fame player)... Don Baylor (player)... Ozzie Smith (Hall of Fame player)... Cal Ripken Jr. (Hall of Fame player)... Bruce Froemming (umpire)... Marvin Miller (union organizer). While it's impossible not to include a lot of interesting and inside stories... the writing/transcription is at times rambling and meandering. At other times the statements contradict themselves or seem to disconnect with no connecting point. Some examples: Willie McCovey states that in 1969 he "batted 320 fifth in the league"... and later in the same paragraph he states: "the only guy that had a higher batting average, I think, was Pete Rose." Juan Marichal says: "The guys you didn't want to see come to home plate were Roberto Clemente, Pete Rose, Billy Williams, Willie Stargell, Tony Davis-I don't know if you remember Tony Davis before he broke his ankle. Man, he was awesome, what a hitter." REVIEWER'S CORRECTION: It wasn't Tony Davis... it was TOMMY DAVIS of the Los Angeles Dodgers who led the National League in hitting in 1962 and 1963. One minute Dick Williams is telling you how he "went to elementary school, about three blocks from Sportsman's Park in St. Louis"... and went to so many games... and then half-a-page later he says out of nowhere that he "graduated in 1947 and our commencement exercises were in the Rose Bowl." I must have re-read that half-page or so three times trying to figure out if I missed something or there was a different Rose Bowl than the one in Pasadena, California. Pages later he mentions he moved to California. In numerous other examples the editor's allowed the words to be transcribed as they must have been said... which does not shine brightly on the speakers... nor do justice to the reader.

If a potential reader is an old-school baseball fan and has accepted the shortcomings, there are tasty gems to be had. It's always enlightening and enjoyable to read about who the hero's of the hero's were... McCovey's was Jackie Robinson... Dick Williams's was Ducky Medwick (my Mom's favorite also)... Tom Seaver's was Sandy Koufax and Henry Aaron... Ozzie Smith's was Roberto Clemente... Cal Ripken's was Brooks Robinson. The common thread between all the ballplayers was their dedication to putting the work in that was necessary to achieve success. It's also interesting to know... to what... and to whom... they credit their eventual success to. Tom Seaver credits the United States Marines and Gil Hodges. Cal Ripken salutes the "Oriole Way" among other things.

Has the grand old game of baseball changed with each decade? I'll say! The two managers in this book Dick Williams and Earl Weaver both say they couldn't manage the way the game is today.
Read more
5 people found this helpful
Report abuse

Jeff Bullock
1.0 out of 5 stars Some Editing Would've Been Nice
Reviewed in the United States on 2 August 2010
Verified Purchase
Another "in the words of" book but this is REALLY an "in the words of" book - it feels like those words were taken directly from the transcripts with NO editing whatsoever; after a while, I expected even more "um's" and "I don't know's" - I don't expect perfect prose and writing but at least make it bearable to read - I stopped reading halfway through the book because the plodding style of writing - or lack thereof - made it too difficult to enjoy. I view Fay Vincent in the same light as Jimmy Carter - a man whose time in office was nondescript and who is now attempting to enhance his legacy with his work after the fact; I don't believe either will succeed.
Read more
6 people found this helpful
Report abuse
See all reviews
Back to top
Get to Know Us
Make Money with Us
Let Us Help You
And don't forget:
© 1996-2021, Amazon.com, Inc. or its affiliates