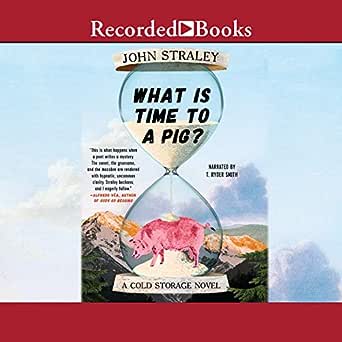 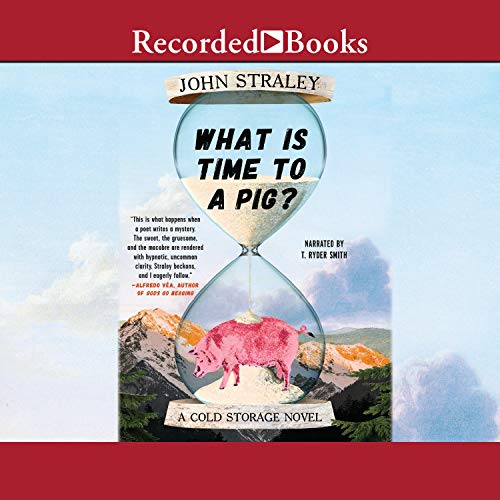 What Is Time to a Pig?

Marquinius
5.0 out of 5 stars A confusion of time and reality laced with warmth
Reviewed in the Netherlands on 25 May 2020
Verified Purchase
First: this was not an easy read. Every time you get a little deeper into part of the story, it twists in time and reality. But what a roller coaster of emotions this is.

I couldn’t stop reading, constantly trying to understand if Gloomy, the main character, was doing something in real time or not.

There’s a deeper story, about governments having too much power.

David Keymer
5.0 out of 5 stars A PUSH-ME-PULL-YOU KIND OF ACTION THRILLER (4-1/2* out of 5*)
Reviewed in the United States on 27 January 2021
Vine Customer Review of Free Product( What's this? )
The koan-like title of this zany novel, What Is Time to a Pig, is your first warning that this book will be difficult to categorize, or should I say genre-ize? It’s basically a crime thriller, with a plot that slides back and forth between Kafka and the Keystone Kops. Let me try to capture it in linear fashion. Sometime between now and 2027, so not far off, the North Koreans tried to pull a fast one on us by bombing Alaska. Their hope was to scare America’s leaders to the negotiating table by contaminating our oil supply, but (1) America went to war instead and invaded North Korea (and won too), (2) America entered a new and exaggerated stage on anti-immigration, actually ani-any kind of Other rule, and (3) the Koreans had shot off two bombs but only one was recovered on Alaska’s soil. By 2027, prisons are a growth industry in the US of A, and in one of them, in Cold Storage, Alaska, resides a man named Gloomy Knob. He’s in prison for killing his sister, which he did but didn’t mean to, and between the drugs they feed to restabilize his personality after multiple “advanced interrogation” sessions, Gloomy doesn’t really know who he is any more, what he did in the past. He only wants to keep his outdoor work privileges at the Ted Stevens High=Security Federal Penitentiary and not rock the boat. Oh, and for whatever reason, he doesn’t know, the Iranians are trying to kill him. He just got shivved in the side during exercise period. (One other complication, whether in the present or the past, it’s not sure at first, Gloomy’s mother has been buried alive near the ocean. Her interrers left her a breathing tube and a scuba tank filled with oxygen, but if she’s not discovered soon, the tide will come in and it’s hasta la vista, Mama’.)

Outside the prison, a set of terrorists are plotting to release Gloomy from incarceration. And the authorities have discovered that the missing bomb may not have exploded yet but is set up so that when the current runs down in its battery, it’ll explode automatically. Then all of Alaska and maybe parts of Canada will have their own personal mushroom-shaped cloud. Everybody –on all sides—think Gloomy knows where the second bomb is located, so he’s a hot property. The problem is: Gloomy’s memories, are so addled by the amnesiac drugs the feds have fed him after they take the electrodes off his testicles and put away the waterboard, that he can’t remember much of anything about his past activities. Sometimes there’s just no there there.

There is a host of other wacko characters in this whacko book, which I, for one, thoroughly enjoys. One of Straley’s previous books, The Woman Who Married a Bear, won the Shamus Award for best first crime novel. All of his previous books have faintly askew titles and he used to be Writer Laureate of Alaska.
Read more
Report abuse

Mitzy
3.0 out of 5 stars American society of dysfunction and a corrections system run amok
Reviewed in the United States on 31 December 2019
Vine Customer Review of Free Product( What's this? )
John Straley creates a maddeningly insane but wholly convincing universe that fires powerfully on the level of plot. But What Is Time to a Pig? does much more. It manages to skillfully ask questions about the nature of reality, memory, and dream while speculating on what may become of our addiction to incarcerating our fellow brothers and sisters. Straley delivers humor and heart with a hard punch to the gut. His quirky characters live and breathe on the page with such life and force you feel like you’re in the room with them. The result is the best kind of intellectual head trip.
Read more
2 people found this helpful
Report abuse

Beth Dodd
5.0 out of 5 stars Kind of Exciting
Reviewed in the United States on 30 January 2021
Vine Customer Review of Free Product( What's this? )
I am guessing there are others in this series and if that is the case I am definitely going to get the others. These characters are memorable and get themselves into some real pickles. They are pretty interesting and the story actually keeps you engaged.
Read more
Report abuse
See all reviews
Back to top
Get to Know Us
Make Money with Us
Let Us Help You
And don't forget:
© 1996-2021, Amazon.com, Inc. or its affiliates