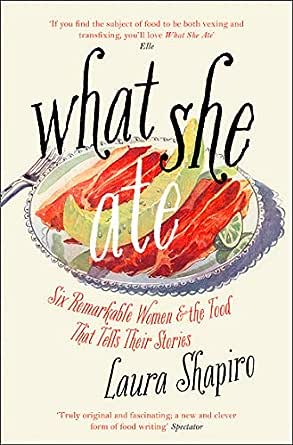 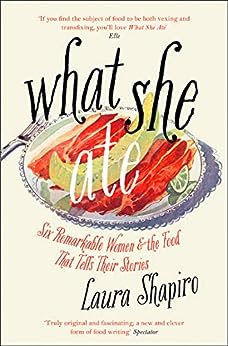 What She Ate: Six Remarkable Women and the Food That Tells Their Stories Kindle Edition

‘In this joyful examination of six women’s lives in food, Shapiro sets out to excavate the minutiae of domestic routines for insights into the connection between mental state and menu … Always entertaining and brimming with enticing small details, from an image of Roosevelt scrambling eggs at the table in a dinner-party performance piece, to Pym noticing that Philip Larkin refused Brie at lunch.’ Francesca Wade, Financial Times

‘If you find the subject of food to be both vexing and transfixing, you’ll love What She Ate’ Elle

‘What She Ate is a culinary and historical delight. Feast on it slowly so as not to miss a crumb’ BookPage

‘I devoured the book in one sitting’ Washington Post

‘Fascinating. Shapiro, like a consummate maître d’, sets down plate after plate and an amazing thing happens: Slowly the more familiar accounts of each of the women’s lives recede and other, messier narratives emerge. How lucky for us readers that Shapiro has been listening so perceptively for decades to the language of food.’ NPR

‘A collection of deft portraits in which food supplies an added facet to the whole.What She Ate redeems the whole sentimental, self-indulgent genre of food writing’ Slate

‘A unique and delectable work’ Kirkus

‘What She Ate establishes Laura Shapiro as the founder of a delectable new literary genre: the culinary biography. A richly satisfying volume’ Megan Marshall

‘Riveting. Shapiro reveals with wit and irony so much that is fascinating and unknown. What She Ate is both menu degustation and grand banquet’ Claudia Roden

Laura Shapiro has written on every food topic from champagne to Jell-O for The New York Times, The New Yorker, The Atlantic, Slate, Gourmet, and many other publications. She is the author of three classic books of culinary history. Her awards include a James Beard Journalism Award and one from the National Women’s Political Caucus. She has been a fellow at the Dorothy and Lewis B. Cullman Center for Scholars and Writers at the New York Public Library, where she also co-curated the widely acclaimed exhibition Lunch Hour NYC.

3.9 out of 5 stars
3.9 out of 5
137 global ratings
How are ratings calculated?
To calculate the overall star rating and percentage breakdown by star, we don’t use a simple average. Instead, our system considers things like how recent a review is and if the reviewer bought the item on Amazon. It also analyses reviews to verify trustworthiness.

Stephen Bishop
2.0 out of 5 stars Modestly interesting
Reviewed in the United Kingdom on 17 July 2020
Verified Purchase
This a curious book. It sets out to shed light on the eating and culinary habits of six women, and what that can tell us about those women. For a start, the selection of women, ranging from Eva Braun to Dorothy Wordsworth, is very singular. There is no real clue as to why these women and not others are the subject matter - was it availability of sources, or some other reason?

The quality of the sections on the individual women is highly variable. That on Barbara Pym (about whom I know quite a lot anyway) is accurate and coherent (apart from an incorrect statement about food rationing). But other chapters jump about from topic to topic, and seem to include material which is interesting to the author rather than being particularly relevant to the character of the woman in question. The chapters on Dorothy Wordsworth and Helen Gurley Brown are particularly prone to this. The chapter on Eva Braun, although fairly balanced, does not avoid a certain condescension and also contains some conclusions which make little sense.

It may be significant that the most coherent chapter is the afterword in which the author talks about her own reaction to food and cooking in the context of her new marriage and living in India. That had a more authentic, less manufactured ring to it.

S Riaz
4.0 out of 5 stars What She Ate
Reviewed in the United Kingdom on 25 January 2018
Verified Purchase
“If I eat I feel guilty. And I’d rather feel hungry.”

The above is a quote from one of the six women featured in this book – Helen Gurley Brown, editor of “Cosmopolitan,” for over thirty years. It helps highlight the difficult, complicated relationship, that so many women have with food. Author, Laura Shapiro, takes six women and gives us a potted biography of each, with a particular slant towards their attitudes, and relationship, to eating.

Those featured are Dorothy Wordsworth, Rosa Lewis, Eleanor Roosevelt, Eva Braun, Barbara Pym and Helen Gurley Brown. There are those who enjoy a fairly uncomplicated love of comfort food – such as Barbara Pym. Those who equate cooking, or providing over meals, as a way of pleasing the men in their life, such as Dorothy Wordsworth and Eva Braun. Rosa Lewis, who apparently inspired, “The Duchess of Duke Street,” used her skills as a cook to rise from a scullery maid (born in the ‘village’ of Leyton – well, I expect it was a village at the time!) to the owner of the Cavendish Hotel and a famous chef, who prepared food for King Edward VII, among other famous clients.

The two women whose food stories were, to me, the most interesting were Eleanor Roosevelt and Helen Gurley Brown. Eleanor Roosevelt apparently employed the ‘most reviled cook in Presidential history,’ in Mrs Nesbitt; who continually provided meals that her husband found repugnant. Helen Gurley Brown, as I mentioned in the beginning of this review, spent her life eternally dieting measured success in her marriage to David, gloating that he was a “motion picture producer, forty-four, brains, charming and sexy. And I got him!”

This is very much a book of social history and biography and there is little analysis about why these women acted the way they did, or had such troubled, or happy, relationships with food. That aside, it is an enjoyable read, which may well lead you on to read full biographies of the women included. I have read biographies about some of them, such as Eva Braun, which is why, perhaps, this work added little that was new to me. However, it does look at such an important part of all our lives – eating and preparing food – and is a fascinating read. I received a copy of the book from the publisher, via NetGalley, for review.
Read more
2 people found this helpful
Report abuse

C.J.
5.0 out of 5 stars A joy to read!
Reviewed in the United Kingdom on 11 July 2019
Verified Purchase
What an interesting perspective. A nice switch from more conforming presentations.
Read more
Report abuse

Deep Reader
4.0 out of 5 stars A good read
Reviewed in the United Kingdom on 13 July 2018
Verified Purchase
Well worth the money!
Read more
Report abuse