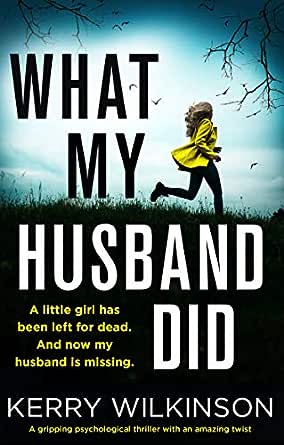 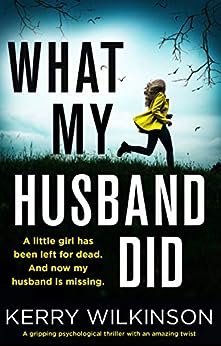 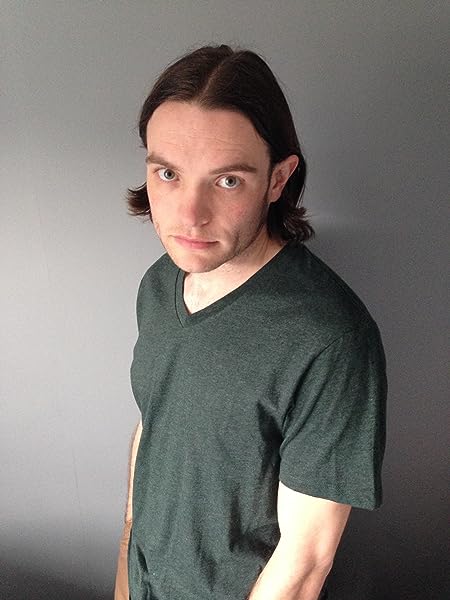 What My Husband Did: A gripping psychological thriller with an amazing twist Kindle Edition

4.4 out of 5 stars
4.4 out of 5
71 global ratings
How are ratings calculated?
To calculate the overall star rating and percentage breakdown by star, we don’t use a simple average. Instead, our system considers things like how recent a review is and if the reviewer bought the item on Amazon. It also analyses reviews to verify trustworthiness.

Stina
TOP 50 REVIEWER
4.0 out of 5 stars A Tangled Web of Secrets and Deception
Reviewed in Australia on 17 November 2020
"A little girl has been left for dead and now my husband is missing."

The village of Leavensfield sounded a bit like a Midsomer village I half expected good old Tom Barnaby to come out of retirement to solve this one! However, like all good chocolate box villages, Leavensfield is picture perfect with cosy cottages and beautiful scenery complete with the typical resident busybodies. In this case, they are "power couples" Harriet and Gavin Bunch alongside James and Sarah (whose surname escapes me just now), with Harriet being at the centre of everything. And if she wasn't then she would make sure she was. So unfortunately for Harriet, it's Maddy and Richard that are at the heart of this story in which she merely has a supporting role.

Maddy and Richard lead ordinary everyday lives until something happens to change it, and that of Leavensfield, forever. Twelve year old Alice Pritchard is found laying face down and unconscious in a stream and word gets out that she was last seen getting into Richard's car. So when Richard fails to return home that same evening, all fingers start pointing at him. Maddy keeps frantically calling and texting him but to no avail. And soon she begins to question Richard's innocence...and whether he is still alive.

As his former student, Maddy is Richard's second marriage after his first wife fell from a cliff whilst they were hiking in Scotland. The house in which they live now is the one he shared with India so it's easy to feel as if she has stepped into another woman's shoes. But as Maddy begins to dig, she soon discovers that Richard has been lying to her. A passing comment by a former colleague of his alludes to Richard having a taste for his students...and Maddy begins to wonder if she really knows her husband at all.

In a village that should be sticking together, as villages general go, Maddy is then ostracised as the community then turn against her believing that as Richard must surely be guilty she is therefore guilty by association. Then to contend with Harriet's sudden snubbing, the screaming accusations of Alice's mother Gemma to being called a "paedo" and having a brick thrown through her window, Maddy is well aware of how easily the justice system can fail a person so therefore she has difficulty associating the man she knew with this terrible crime. And all the while her conscience wrestles with a childhood event that left emotional scars...and her questioning the truth behind the assault of little Alice.

But then Maddy receives renewed hope that Richard is alive and well...and in hiding. However in true Richard-form, the answers to the questions she seeks are not forthcoming. So if he is innocent, why is he hiding? What is Richard concealing? Is he really guilty after all?

An intriguing plot with a palpable tension throughout, WHAT MY HUSBAND DID weaves suspense, misdirection and plenty of twists to keep the reader engaged. Kerry's writing style is simplistic but well crafted that makes the storyline flow easily. The dual timeline is a clever tactic presented in a unique way that keeps the suspense coming.

Written mostly in Maddy's present day narrative, the reader is provided with flashbacks into her past which ultimately leads up to a penultimate event in her life. Added to that is, cleverly, the addition of Richard's brief narratives giving new perspective to this terrible crime that rocked the village of Leavensfield.

I honestly had no idea what happened as Kerry's clever writing threw enough red herrings in my path to blind me and yet I still enjoyed the ride. I began to wonder whose husband did what as the truth is disclosed in a surprising twist that didn't just jump out of nowhere but rather revealed itself gradually.

WHAT MY HUSBAND DID is a tangled web of secrets and deception as a village that knows everyone and everything closes ranks on itself. A cleverly told story that builds slowly with an undercurrent of suspense and tapers out a little at the end, WHAT MY HUSBAND DID is Maddy's story - both past and present.

An interesting read that was, for the most part, enjoyable. I wouldn't call it a psychological thriller but it is a suspenseful read that is sure to entertain mystery and thriller fans. Recommended.

The Cookster
4.0 out of 5 stars Plenty of twists and turns in this credible standalone mystery.
Reviewed in the United Kingdom on 25 November 2020
Verified Purchase
Rating: 4.0/5

This standalone mystery from Kerry Wilkinson is my first experience of reading anything by this writer.

Little Alice is fighting for her life in hospital following an apparent assault. Everyone in the small community suspects Richard - and why wouldn't they? Little Alice was last seen getting into his car, which was found abandoned near the scene and Richard, too, has vanished without trace. Now Richard's wife, Maddy, must try to get to the bottom of things.

The novel is written in quite a filmic style and it would be very easy to imagine this being adapted into a television mini-series. Kerry Wilkinson writes in a way that paints perfectly clear pictures of the scene and the characters, but without allowing this to detract from the proceedings. The pace is always maintained well and the plotting is clear.

There are plenty of questions that the reader is forced to ask as the story unfolds. There are also numerous twists and turns, but, thankfully, no rabbits being pulled out of hats for pure shock value ... the plotting is much tighter and well controlled than that.

I enjoyed this and will look forward to more from this author.
Read more
Report abuse

MazLee
5.0 out of 5 stars Gripping
Reviewed in the United Kingdom on 19 November 2020
Verified Purchase
I have read all of Kerry Wilkinson’s books and always look forward to a new one. This one certainly did not disappoint.

A young girl, Alice, Pritchard, is left for dead at the edge of a stream in the small town of Leavensfield. Shockwaves run through this close-knit community, which are heightened by the disappearance of Richard, a well-known local man. During the police investigations, it is discovered that Alice was last seen getting into Richard’s car. Gossip is rife but Maddy, Richard’s wife, cannot believe that he would have hurt Alice but where is he?

I loved the descriptions of the locals and really became embroiled in their lives. Alongside this main story is a back story from Maddy’s childhood which fits in well with the narrative.

I found the book intriguing and was gripped from start to finish.
Read more
Report abuse

JVW
5.0 out of 5 stars Brilliant.
Reviewed in the United Kingdom on 20 November 2020
Verified Purchase
What My Husband Did is a brilliant study in human nature as well as being a fantastic page turning psychological thriller about secrets and lies in a small village community.
The character Harriet is someone we have all come across in our lifetime, formidable, larger than life and takes charge of everything and everyone. The village committee just couldn’t function without her.

Maddy’s plot to get to see her Dad was typical of a crafty teenager and her story is set between her life as a teenager her story now.

Her husband has secrets of his own and so do some of the villagers, which I won’t discuss or it will give away the plot.

As with all of Kerry Wilkinson’s books the surprise ending built up to a crescendo of turnarounds that kept me reading way past my bedtime but I just had to finish the book.
Read more
Report abuse

Happy Shopper!
5.0 out of 5 stars Great book! Really gripped me from start to end
Reviewed in the United Kingdom on 24 November 2020
Verified Purchase
My first book by this author, but definitely won't be my last. Excellent characterisations and well thought out plot. Kept me on the edge of my seat wanting to know what happens next. I didn't guess the ending, which is always good! Very enjoyable read.
Read more
Report abuse

Joolsb
5.0 out of 5 stars One sitting page turner!
Reviewed in the United Kingdom on 21 November 2020
Verified Purchase
This was great book that I read in one sitting. Lots of twists and turns. I never guessed the ending either. Good one Kerry.
Read more
Report abuse
See all reviews
Get FREE delivery with Amazon Prime
Prime members enjoy FREE Delivery and exclusive access to movies, TV shows, music, Kindle e-books, Twitch Prime, and more.
> Get Started
Back to top
Get to Know Us
Make Money with Us
Let Us Help You
And don't forget:
© 1996-2020, Amazon.com, Inc. or its affiliates