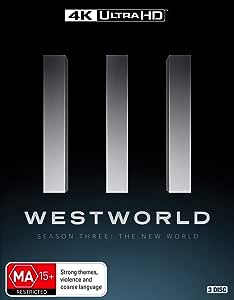 The real gods are coming...and they are very angry. Westworld's android hosts were never allowed to leave the park. But now, at the end of the game, they're here: in our world. Dolores (Evan Rachel Wood) escapes into the mysterious innerworkings of the technocratic elite, only to be surprised by the dark truth that ties her world and ours. Caleb (Aaron Paul), a struggling veteran trying to better himself, has a life-changing encounter, while Bernard's (Jeffrey Wright) attempts to lie low under a new identity are threatened. Maeve (Thandie Newton) is thrown into a new kind of world, where she reunites with a couple of familiar faces before crossing paths with a mysterious figure who seeks her help.

isaac ferguson
3.0 out of 5 stars Great show, product not as advertised
Reviewed in Australia on 3 January 2021
Verified Purchase
The show was fantastic, I was however disappointed with the product itself, it was advertised as “4K + Blu Ray” however only included the 4K discs. I always buy my shows and films 4K + Blu Ray so I can watch the 4K versions, but when friends want to borrow them, they can do so, as most people I know only have a blu ray player
This is a very misleading title on the product and it should be changed

Read more
One person found this helpful
Helpful
Report abuse
See all reviews
Get FREE delivery with Amazon Prime
Prime members enjoy FREE Delivery and exclusive access to movies, TV shows, music, Kindle e-books, Twitch Prime, and more.
> Get Started
Back to top
Get to Know Us
Make Money with Us
Let Us Help You
And don't forget:
© 1996-2020, Amazon.com, Inc. or its affiliates