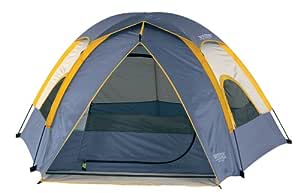 by Wenzel
4.0 out of 5 stars 696 ratings
International product from outside Australia

Lightweight, easy to set up and take down, the Wenzel Alpine 3-pole pentadome tent is a great choice for a camping adventure. It features a single room that measures 8 by 8.5 feet with the third pole creating a vestibule, giving an area for storing gear and weather protection. It will sleep up to 3 people. This tent has a D-style door with mesh window, and closeable mesh windows for great cross ventilation. A gear loft and hanging gear pocket are included as well as an integrated mud mat with a drainage strip. The shockcorded fiberglass frame and pole pockets make set up quick. The Weather Armor polyester with a polyurethane coating protects from top to bottom while the sonic sealed polyethylene tub-style floor combats water seepage. Seams are Double-stitched, lap-felled to provide a shingle effect against water and all threads, zippers and webbing are treated with superior water repellency applications. Duffle bag is included for storage. Specifications: Base: 8.5 ft. x 8 ft. Center Height: 48 in. Area: 49 sq. ft. (vestibule 7 sq. ft.) Door: Dutch "D" style Floor: welded polyethylene Frame: fiberglass Stakes: steel Carry Weight: 8 lbs Sleeps: 3

Lightweight, easy to set up and take down

The Wenzel Alpine 3-pole pentadome tent is a great choice for a camping adventure. It features a single room that measures 8 by 8.5 feet with the third pole creating a vestibule, giving an area for storing gear and weather protection. It will sleep up to 3 people. This tent has a D-style door with mesh window, and closeable mesh windows for great cross ventilation. A gear loft and hanging gear pocket are included as well as an integrated mud mat with a drainage strip. The shockcorded fiberglass frame and pole pockets make set up quick.

Mary Blum
5.0 out of 5 stars LOVE LOVE LOVE
28 July 2016 - Published on Amazon.com
Verified Purchase
LOVE LOVE LOVE... I went on a 48 state 96 day tour, mostly camping. It was easy to set up and take down. Kept me nice in dry in some pretty nasty weather.
Read more

As for the tent itself, the first night out we had severe weather - a line of storms followed by soaking rains. I was a little disappointed as the seam where they sewed in the tag with instructions on dealing with condensation and whatnot is what leaked! The tag kept wicking water in through the seam. We had round two of the weather the next night, and the same leak occurred even though the weather wasn't quite as severe. To be fair though, several other tents had water issues too - it was a good storm. I'm going to remove the tag and then seal the seam. There is a mesh thing that goes in the roof that I loved. I put the shirt that I used to sop up water on it and it dried out quickly, but I could easily see storing some things up there like a wallet or purse (saving the pocket for nighttime necessities). Overall, it's a nice little tent for the money, which is what I was looking for.
Read more
22 people found this helpful

Paul
5.0 out of 5 stars Good MotoCamping tent, for 2 people, seal the seams. Mine lasted 5 years.
22 January 2018 - Published on Amazon.com
Verified Purchase
I bought one of these tents in April of 2012, and have used it for 5 years without any major issues. Just this last year (2017) the poles began to break on me while I was out on my annual 21 day mototrip. That’s not bad for a tent that was used 5 weeks a year for 5 years. I jury-rigged the two broken poles and finished the trip.

Over the years the tent has taken its share of abuse, but I feel that it has held up sturdily for the miles I’ve covered using it. I have the tiniest of holes in one of the walls (maybe a 2mm to 3mm hole), near the floor of the tent - and it never showed signs of running or enlarging. I never really had much of an issue with rain coming in through that hole either. Also the coating on the inside floor is showing signs of wear and tear, but again, that’s to be expected with the use the tent has had.

Like all tents, there will be some condensation inside depending on the weather. As far as rain goes, the first two days of her maiden voyage were rainy, and I did get some leaking at the stitched seam for the lower inside pocket. After a good application of seam sealer (before the next trip), I don’t really feel like I’ve had any serious issues with water intrusion. I use a ground tarp under the tent at all times. EDIT: Thinking about it more, I have had some small puddles in the tent in Heavy Extended Torrential rain, but nothing that ever ruined a trip. Again, Seal The Seams.

The carrying bag that mine came with has enough extra room to store a tarp, camp axe, and small sledge hammer inside with the tent. I don’t know if they still ship with such a nice bag. EDIT: The carrying bag on the new tent is similar to the old, but the material it’s made of seems to be thinner and lighter weight. I don’t think it will take the abuse that the bag on my original tent took. The bag is still green and measures 24”x6”x6”. The sturdiness of the bag is important to me, since I’ll have it strapped to the back of a bike for thousands of miles in all weather conditions. I’ll look into something like an SW-Motech Tentbag 2 as a sturdier option in which to carry the tent.

I’m 6’ ~ 200 lbs and I feel that the tent is comfortable for one adult, motorcycle gear, and supplies. You could probably fit two adults in the tent - depending on their size, but if you’re trying for three, they would have to be extremely friendly and small statured.

The coldest temperature I’ve camped in using this tent was 32 degrees near Lake Tahoe. This isn’t a fancy expedition class tent, but I bundled up and went to sleep, and everything was fine.

I liked the tent enough that I’ve purchased a second one for my next 5 years of motocamping.

I’d summarize by saying that it is a good tent at this price point, and while there are no doubt better, more expensive tents out there - this one will get the job done without breaking the bank. I gave it 5 stars based on bang for the buck and my good experiences with the tent.
Read more

Hacksaw
5.0 out of 5 stars I like it
9 February 2016 - Published on Amazon.com
Verified Purchase
I bought this tent for an upcoming hike with friends. All the negative reviews about the poles being too long made me nervous, but with so many positive reviews I decided to purchase it anyway.

I pitched the tent in my living room upon arrival, and once I got it set up I was impressed. Getting it set up was tricky, though. I don't recommend pitching it by yourself, especially if you have never pitched a tent before. I am by no means an experienced camper, but I have pitched a few Ozark trail tents without issue but this tent is different. I do understand why the negative reviewers say the poles are too long, because at first they do look too long. With a little tlc and patience though it's not too bad. Definitely follow the directions, because again this is not an easy to set up Ozark trail tent. I found that as the center of the tent comes up, you have to gently pull the tent material that guides the tent poles back down over the poles as it will kink when the center comes up.

This tent took me about half an hour to set up. I will have friends who can help me on this trip though so set up should take a whole lot less time. I'm really looking forward to using this tent on my trip and I would purchase this tent again
Read more
15 people found this helpful
Go to Amazon.com to see all 665 reviews 3.8 out of 5 stars
Get FREE delivery with Amazon Prime
Prime members enjoy FREE Delivery and exclusive access to movies, TV shows, music, Kindle e-books, Twitch Prime, and more.
> Get Started
Back to top
Get to Know Us
Make Money with Us
Let Us Help You
And don't forget:
© 1996-2020, Amazon.com, Inc. or its affiliates