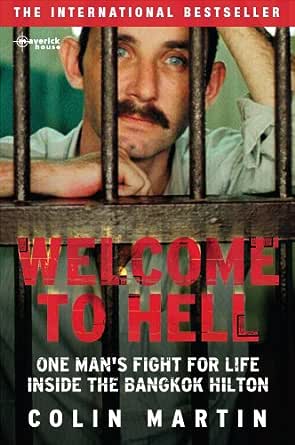 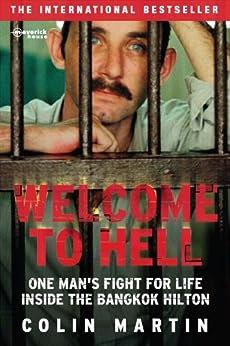 Welcome to Hell: One Man's Fight For Life Inside The Bangkok Hilton Kindle Edition

"An amazing story...an extraordinary story, there's the making of a good film in it... An incredible achievement." -- Gerry Ryan

Written from his cell and smuggled out page by page, Colin Martin’s autobiography chronicles an innocent man’s struggle to survive inside one of the world’s most dangerous prisons. After being swindled out of a fortune, Colin was let down by the hopelessly corrupt Thai police. Forced to rely upon his own resources, he tracked down the man who conned him and, drawn into a fight, he accidentally killed that man’s bodyguard. Colin was arrested, denied a fair trial, convicted of murder and thrown into prison, where he remained for 8 years. Honest and often disturbing, but told with a surprising humour, Welcome to Hell is the remarkable story of how Colin was denied justice again and again.

Cheryl Launt
TOP 1000 REVIEWER
5.0 out of 5 stars Lifts the curtain to life in a Thai Jail.
21 February 2017
Format: Kindle EditionVerified Purchase
A horrifying story of a totally innocent man sentenced for murder in Thailand. Colin spent 8 years in jail, set up and tortured, suffering endlessly the whole time. His book scared me, and made me cry for him, and overwhelmed me with the horror. How does this continue to go on. The world needs to remove their blindfolds.
Read more
Helpful
Comment Report abuse

Alan M
5.0 out of 5 stars Unbelievable! Could not put it down,
1 May 2015
Format: Kindle EditionVerified Purchase
Oh my god! I haven't had a book reel me in as quickly as this one ever! The corruption and abuse this poor man had to suffer at the hands of the Thai joke system have made me tick off another country I will never visit. Being a law abiding citizen that I am still makes me not want to ever step foot into this despicable world of corruption and brutality cause as this book proves, even the innocent can suffer for the sakes of the criminally insane cause that's all you can call the "authorities" in Thailand. I'm proud that he fought all he way to the end and made it out of that hell alive.
Read more
Helpful
Comment Report abuse

Tagijack
4.0 out of 5 stars Surviving hell
2 August 2018
Format: Kindle EditionVerified Purchase
Told in great detail. To survive this hell on earth is a miracle. Not for the faint hearted. How does this continue to happen.
Read more
Helpful
Comment Report abuse

Carlo Espartero
5.0 out of 5 stars Captivating book
23 February 2017
Format: Kindle EditionVerified Purchase
This book really captures what it was like in his shoes.. Very sad events and you can't help but just go what the hell is going on over there.
Read more
Helpful
Comment Report abuse

Go to Amazon.com to see all 30 reviews 4.4 out of 5 stars
Get FREE delivery with Amazon Prime
Prime members enjoy FREE Delivery and exclusive access to movies, TV shows, music, Kindle e-books, Twitch Prime, and more.
> Get Started
Back to top
Get to Know Us
Make Money with Us
Let Us Help You
And don't forget:
© 1996-2020, Amazon.com, Inc. or its affiliates