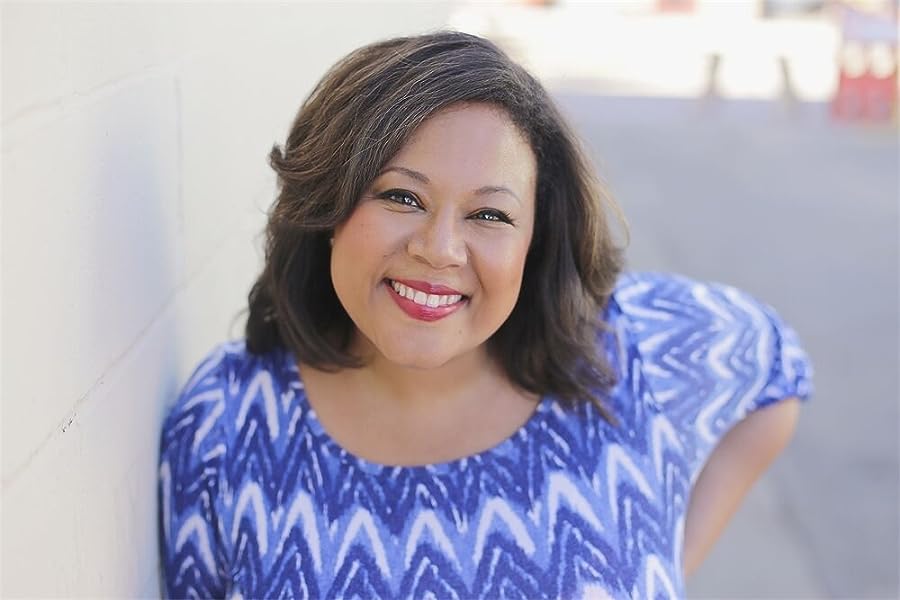 The Wedding Date: A feel-good romance to warm your heart Paperback – 25 January 2018

by Jasmine Guillory (Author)
4.3 out of 5 stars 3,587 ratings
See all formats and editions
Sorry, there was a problem loading this page. Try again.

What a charming, warm, sexy gem of a novel. I couldn't put The Wedding Date down. I love a good romance and this delivered from the first page to the last... One of the best books I've read in a while -- Roxane Gay, New York Times bestselling author of Hunger

The Wedding Date brims with personality. It's funny, deeply honest, and above all, truly swoony - the kind of all-consuming romance where you hold your breath with delight as two wonderful people start to find each other, like the best possible version of real life. We can't wait to read more from Jasmine Guillory -- Heather Cocks and Jessica Morgan, bestselling authors of The Royal We

Jasmine Guillory is a graduate of Wellesley College and Stanford Law School. She is a Bay Area native who has towering stacks of books in her living room, a cake recipe for every occasion, and upwards of 50 lipsticks.Visit her website: www.jasmineguillory.com, find her on Facebook www.facebook.com/jasmineguillorywriter and follow her on Twitter @thebestjasmine and Instagram @jasminepics for more information.

Jasmine Guillory is a graduate of Wellesley College and Stanford Law School. She is a Bay Area native who has towering stacks of books in her living room, a cake recipe for every occasion, and upwards of 50 lipsticks.Visit her website: www.jasmineguillory.com, find her on Facebook www.facebook.com/jasmineguillorywriter and follow her on Twitter @thebestjasmine and Instagram @jasminepics for more information.
Read more
Start reading The Wedding Date: A feel-good romance to warm your heart on your Kindle in under a minute.

4.3 out of 5 stars
4.3 out of 5
3,587 global ratings
How are ratings calculated?
To calculate the overall star rating and percentage breakdown by star, we don’t use a simple average. Instead, our system considers things like how recent a review is and if the reviewer bought the item on Amazon. It also analyses reviews to verify trustworthiness.

Carlene
4.0 out of 5 stars Maybe, Maybe Not?
Reviewed in Australia on 8 April 2021
Verified Purchase
An easy read, great characters, and a story line most would associate with. Being in a relationship with someone that feels right, but then comes all the insecurities. Will Drew and Alexa make it? A feel good, easy read book...
Read more
Helpful
Report abuse

LileRositta
4.0 out of 5 stars Really Enjoyed It
Reviewed in Australia on 4 May 2020
Verified Purchase
I didn't know what to expect really but I really loved it. First time reading a book by this author, I'll be looking to read another one.
Read more
Helpful
Report abuse

Kate
5.0 out of 5 stars Highly worth the read
Reviewed in Australia on 4 August 2020
Verified Purchase
Very enjoyable and entertaining book. Would definitely read Jasmine Guillory again and recommend her books. Introduces the main characters for the next books in line.
Read more
Helpful
Report abuse

Karen
3.0 out of 5 stars Predictable but a light read.
Reviewed in Australia on 17 September 2018
Verified Purchase
It was a bit predictable but a very light read. It was just ok. Not fantastic. It had been recommended to me by a few people so I was expecting more.
Read more
Helpful
Report abuse

Amazon Customer
5.0 out of 5 stars Love it!
Reviewed in Australia on 30 November 2018
Verified Purchase
Loved the novel. It’s short and fun with a great ending.
Read more
Helpful
Report abuse

Clogs63
4.0 out of 5 stars Love survives the tirrany of distance
Reviewed in Australia on 4 June 2018
This book was an engaging story about a professional couple living in seperate cities finding their way into a new relationship. Both Drew and Alexa were loveable characters. The story is mainly about the developing romance between Alexa and Drew, but it was nice to read about the issues a black people may face in everyday live. It is only touched upon here and there, but it made me think and gave me a little more insight into these issues. Definitely will read more novels written by this author.
Read more
Helpful
Report abuse
See all reviews

Amy Elizabeth
5.0 out of 5 stars A feel-good, heartwarming read that I couldn't put down
Reviewed in the United Kingdom on 26 March 2018
Verified Purchase
After getting stuck in an elevator together, Alexa agrees to be Drew's plus one to the wedding of his ex-girlfriend. But, what starts out as a fake relationship turns into something real when the weekend is over and they can't stop thinking about each other... Will their new long distance relationship work out, or will they get in their own way (like they always do...)?

It's rare that romance books get mainstream coverage, so my interest was definitely piqued when I saw The Wedding Date popping up everywhere - and I couldn't resist when I spotted that it was just £1.99 on Kindle. A feel-good, heartwarming read that I couldn't put down, this book starts out with a sweet meet-cute and then throws adorable and sexy moment after adorable and sexy moment at you, until you're as in love with these characters as they are with each other.

It's so much easier to get into a romance novel, for me, if the characters have other interests other than each other - and that couldn't be more the case here. Alexa is the mayor's chief of staff working on the biggest and most meaningful project of her life, whilst Drew is a paediatric surgeon, and both have a cast of friends and family with whom they have relationships that I was equally invested in as I was in the romance.

My other favourite part of the book is they way that it weaved in discussion of racism, and the realities of being a black woman dating a white guy, who has mostly white friends. They way they both deal with that situation really adds another level to their story, and felt very real to me. I really can't wait for Jasmine's next book, which is coming out later this year, featuring a character we've already met...
Read more
3 people found this helpful
Report abuse

RelentlessEliza
4.0 out of 5 stars 4 “save the date” Stars
Reviewed in the United Kingdom on 31 January 2018
Verified Purchase
THE WEDDING DATE is the utterly adorable romance charming in both its story telling and delivery.

It begins with a chance meeting between Alexa Monroe and Drew Nichols. Alexa is in town meeting her sister at the hotel in which she is staying. In a rush to get up to her sister’s room she barely notices the stranger who is on board with her. That quickly changes when the power goes out and they become stuck.

The stranger in question is handsome paediatric surgeon, Drew. He’s a reluctant member of a Wedding party taking place over the next few days. Getting stuck in an elevator is an inconvenience he can do without, but once he strikes up a conversation with his fellow detainee, it quickly becomes the highlight of his day.

The ease of interaction and conversation became them would become a real source of enjoyment for me. Although they have a “known” each other a short while it makes perfect sense for Drew to invite Alexa to be his wedding date. It’s a welcomed element of fun and mischief to the story, and the beginning of friendship that so wonderfully blossoms into more.

I have to say how much I really enjoyed Alexa as a heroine. She was smart , driven and one hell of a classy lady.
Read more
2 people found this helpful
Report abuse

Keir
4.0 out of 5 stars A light, fun read
Reviewed in the United Kingdom on 1 March 2019
Verified Purchase
I enjoyed this book. Alexa was a very likable lead, with an interesting job and a reasonably well developed back story. I liked that she was described as being a little larger than the often very slim heroines of romance novels, and was still beautiful and desirable. I thought issues around race and dating were dealt with well (Alexa is black and Drew is white). There are moments where Alexa has to point out the differences in their experiences that Drew hasn't noticed and these work really well and add a layer of realism to their romance. The romance was sweet, and the way that their feelings develop and deepen for each other was believable and sweet. The food was described very well and I had a hankering for many of the foods they ate, especially the oft mentioned donuts! The only draw back for me was the love interest Drew. He had a lot of good qualities and I could see why Alexa would fall for him... but he also had some pretty unpleasant characteristics: some fairly troubling bouts of jealousy over Alexa's male friend and his own best friend, belittling Alexa's work when they are in the midst of an argument, kicking and throwing things, and treating his 'best' friend really badly (I have no idea why Carlos stuck around to be shouted at). This unpleasant side to Drew built up in the second half of the novel and since he was given far less grounding (his backstory is that he is a pediatric surgeon and had a lot of short term girlfriends) I was left feeling like he really wasn't the perfect match for Alexa. This wouldn't be a problem in another genre (people fall for the wrong people all the time), but as it was a romance novel, I really wanted to believe Alexa would live happily ever after; but by the end I was hoping for a twist and that she'd actually end up with someone else. I still think this was a great novel, and would recommend it to others, I may just rejig the ending a little bit in my head!
Read more
One person found this helpful
Report abuse

Sarah
3.0 out of 5 stars Bit disappointed...
Reviewed in the United Kingdom on 24 November 2020
Verified Purchase
...but hate to admit that I really didn’t enjoy this sadly. Felt like it was a chore to finish it. I will admit that it was rather refreshing to read a book that featured a normal size woman as a lead character but then it was overly mentioned which put me off as was making it more of a thing.
Read more
2 people found this helpful
Report abuse

Crystal Cutting
4.0 out of 5 stars So glad I bought this book
Reviewed in the United Kingdom on 13 April 2018
Verified Purchase
I'm so glad I ordered this book. Im a sucker for interracial romance and wanted to read something new. It didnt disappoint.
This novel is fresh. Jasmine Guillory writes about love, the exhilarating light fluffy kind. And she's managed a rare exploit: writing an interracial romance which is not gloomy. A romance which is a romance, imagine that!!! No social commentary, pure escapism!

It is what it says it is, a winner!
Read more
2 people found this helpful
Report abuse
See all reviews
Back to top
Get to Know Us
Make Money with Us
Let Us Help You
And don't forget:
© 1996-2021, Amazon.com, Inc. or its affiliates