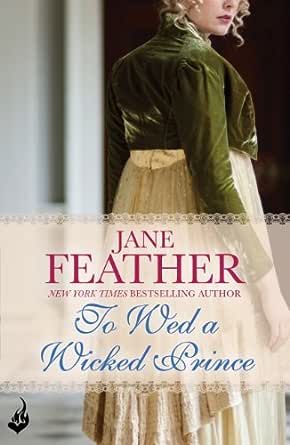 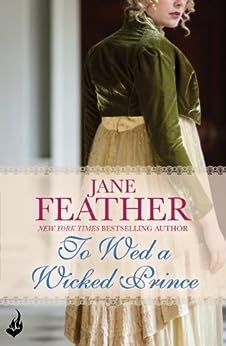 Feather gives an overview of Covent Garden, bordellos, pickpockets, Cyprians and the sights and smells of the place along with the aristocratic and not so aristocratic side of bawdy Georgian England in this nicely crafted start to The Blackwater Brides trilogy. - RT Book Reviews, 4 StarsThe second of Jane Feather's Bride Trilogy is notable for another memorable heroine. Phoebe...is a messy delight - The Romance ReaderJane Feather is an accomplished storyteller....The result - a rare and wonderful battle-of-the-sexes story that will delight both historical and Regency readers - Daily News of Los AngelesFeather's writing style is spirited and her plot is well-paced - Publishers Weekly --This text refers to the digital edition.

Jane Feather is the New York Times bestselling author of more than thirty sensual historical romances. She was born in Cairo, Egypt, and grew up in the south of England, and she has more than 10 million copies of her books in print. --This text refers to the digital edition.

MDG
4.0 out of 5 stars Good storyline.
Reviewed in the United Kingdom on 21 July 2009
Verified Purchase
This book is part of a trilogy, each of which can be read independently.
The story is enjoyable.
Obviously, "spellcheck" had been used without reference to the context resulting in several spelling mistakes. Further, anatomical text-book nomenclature is used which reduces the romantic effect.
Alright, I'm being pedantic, but a little extra care in editing would have been advantageous.
Read more
Report abuse

Rebecca Huston
2.0 out of 5 stars Starts off good, but the MCP rears its ugly little snout soon enough
Reviewed in the United States on 22 April 2009
Verified Purchase
I have a very bad habit when it comes to books that arrive in series: I tend to try and read all of them. Sometimes this works out quite well, especially when an author is very good such as Lois McMaster Bujold or CJ Cherryh or Julian May. But then there are the times when a sequel falls flat on its face, and I'm left gritting my teeth in annoyance as I wade through an implausable story.

Such was the problem with the second book in Jane Feather's Cavendish Square trilogy of historical romances set in Regency England. This time it is Livia Lacey's story, the owner of the house on Cavendish Square and the Russian prince that she gets romantically involved with. I have to say I was taken aback by the hero in this one -- usually they tend to be titled Englishmen, not foreigners, so there was already something out of the ordinary to expect here.

When Lady Livia Lacey meets the dark, charming Prince Prokov she is dazzled, but keeps her cool demenour. To her, this stranger is just another emigre in London society, caught between two warring factions as Czar Alexander and Napoleon have now become allies at Tilsit. He is smooth, polished, and wildly extravagant as Livia finds out to her own dismay. First there's a beautiful grey mare, then a whirlwind romance and the prince asking for her hand, and a life of pampered luxury.

But Prince Alex Prokov isn't all that he seems either. He keeps hiding secrets from Livia, who is steadily getting confused by his behaviour. One moment he's making passionate love to her, the next he's ordering her about and working very hard at hiding something. What that is will turn Livia's life upside down, and no doubt ruin her marriage as well...

What really annoyed me about this one: Livia turns into a bit of a doormat around the prince, even to the point of when he banishes her beloved terriers to the mews she doesn't kick up a fuss. He creates dissent in her cozy household by insisting that his servants being in charge, and finally, bullying her about and turning into a general all around jerk once the ring goes on her finger. What's worse is that the author has him fixing the relationship problems with great sex. And even worse still -- he keeps lying throughout the book, over and over again, even though he knows that it will drive Livia away from him.

I'm sorry, but while it's true that men could be right bastards in the past, it also perpetuates the sort of behaviour that should be outlawed these days. And frankly, if any man who wanted a serious, permanent relationship with me ever pulled the 'It's me or the pets' sort of crap, I'd be showing him the door right quick. No one does that to me. And frankly, I don't like reading about it either. It borders on emotional and mental abuse, and that doesn't sell a book to me.

This was a just plain rotten novel. The attitudes are too modern and flippant, Prince Alex is trying to be James Bond in Regency dress, the relationship between the two leads hovers on the brink of abuse, and the ending was way over the top. There are better writers of Regency novels out there, and honestly, if I had already not bought the third book in this series, I wouldn't have bothered reading more of Jane Feather's work.

Kindle Customer
5.0 out of 5 stars Nothing is as it appears
Reviewed in the United States on 9 November 2018
Verified Purchase
Livia thinks she inherited a house but didn't. Alex appears to be nonpolitical but isn't. Then patriotism turns out to be for the unexpected side. A mixed blessing to find letters in the attic from his father to his mother.
Read more
Report abuse

Anne Hagopian
5.0 out of 5 stars I love Jane Feather's
Reviewed in the United States on 29 June 2018
Verified Purchase
again, I was able to read, and ejoy all three books in order, by finding the other two on Kindle. I love Jane Feather's boooks
Read more
Report abuse
See all reviews
Back to top
Get to Know Us
Make Money with Us
Let Us Help You
And don't forget:
© 1996-2021, Amazon.com, Inc. or its affiliates