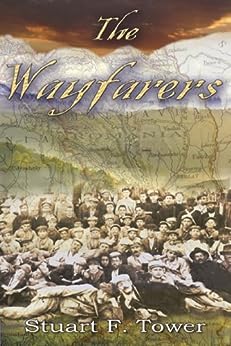 by Stuart F. Tower (Author) Format: Kindle Edition
See all formats and editions
Sorry, there was a problem loading this page. Try again.
Sixty spirited young men and women, marching across the face of an explosive 1904 Europe, brazenly flying an "enemy" flag through 1500 miles of decidedly hostile territory. Why are they asking for certain trouble? Why can't they go quietly, like the millions of others, in the dark of night, clandestinely crossing borders, hoping to make it alive to the great ports where steamships will ferry them to the golden land....America. Why? Because they are sworn to make their exodus a powerful statement....a loud and clear protest against the inhumane, deplorable conditions , the government-planned trade boycotts and resultant impoverishment, the increasing number of deadly pogroms, and above it all, the sheer hopelessness.

These indefatigable emigrants will encounter along the way every conceivable barrier and intervention: the military forces of Romania, the Austro-Hungarian Empire and the new Germany; small-town magistrates, xenophobic police and roving outlaw gangs of the most unsavory kind. Add to this formidable mix, Carpathian snow storms, impassable passes, episodes of forced labor, imprisonment and escape, unforeseen influences from their own people, then getting to ports on the North Sea is far from a romantic pleasure trek. Their courage, one-mindedness, resourcefulness, and the leadership of young Mordecai Anieloff and his chosen cadre, are all that they can rely upon to get them through.

These were the "Wayfarers of Birlad", the fusgeyers, those who went by foot, and their story is your story. It rightfully belongs to all of us whose plucky ancestors from all parts of the world experienced the good struggle to get to a better place, while ever-reluctant to talk about it. We and the generations ahead are the fortunate beneficiaries
Read more
Previous page
Next page

lawprof
3.0 out of 5 stars Good topic, execution not as effective
Reviewed in the United States on 25 November 2013
Verified Purchase
The topic was interesting, but the execution of the book was disappointing. Instead of writing this as a novel, the author should have just written it as non-fiction.
Read more
Report abuse
See all reviews
Back to top
Get to Know Us
Make Money with Us
Let Us Help You
And don't forget:
© 1996-2022, Amazon.com, Inc. or its affiliates