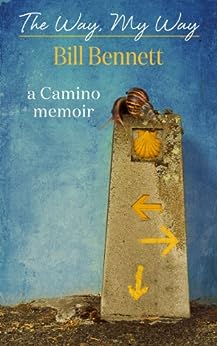 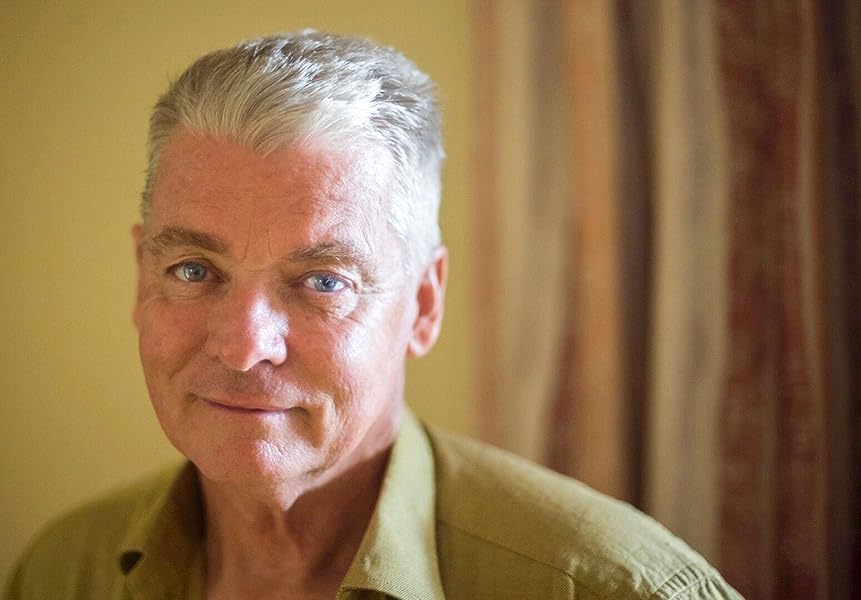 The Way, My Way Kindle Edition

by Bill Bennett (Author, Photographer), Jennifer Cluff (Editor) Format: Kindle Edition
See all formats and editions
Sorry, there was a problem loading this page. Try again.
“I’d never done anything crazy like this before – a pilgrimage walk. I was not a hiker, and I wasn’t a Catholic. In fact, I wasn’t even sure I was a Christian. On the last government census when I had to state my religion, I'd said I was a Buddhist, mainly because they’ve had such a hard time in Tibet I felt they needed my statistical support.

I was also not an adventure traveller. For me, adventure travel was flying coach. All this backpacking and wearing of heavy boots and flying off to France to walk ancient pilgrimage routes was a new experience, and not one that made me feel entirely comfortable.”

And so Bill Bennett, an Australian based film director, set off on an 800 kilometre walk across Spain to Santiago de Compostela, not sure why he was doing it, and not feeling entirely comfortable. His discomfort increased markedly a few days later when his knee gave out – so the rest of the walk was a “pain management pilgrimage.”

But he kept his sense of humour, and his memoir is at times hilarious but also deeply moving, and insightful. In the vein of Bill Bryson and Eric Newby, The Way, My Way takes you on a unique spiritual journey, and gives you a hearty laugh along the way.
Read more
Previous page
Next page

Bill Bennett is an Australian based film director. He lives in Mudgee, in Central New South Wales, with his wife Jennifer. The Way, My Way is his first book. --This text refers to the paperback edition.

In a career spanning more than thirty years, Bill Bennett has made numerous feature films and documentaries and won many awards, both in his home country of Australia, and internationally. His films have screened at some of the world’s most prestigious film festivals, and been distributed through most of the major Hollywood studios. He’s had three major international retrospectives,

As an author, Penguin Random House were the publishers of his YA supernatural thriller series, Palace of Fires. His Camino memoir, The Way, My Way, is being adapted into a movie.

4.7 out of 5 stars
4.7 out of 5
346 global ratings
How are ratings calculated?
To calculate the overall star rating and percentage breakdown by star, we don’t use a simple average. Instead, our system considers things like how recent a review is and if the reviewer bought the item on Amazon. It also analyses reviews to verify trustworthiness.

Liz
5.0 out of 5 stars Honest and moving
Reviewed in Australia on 6 April 2019
Verified Purchase
It was my PGS that brought me to this book having already read five others on the Camino and viewing Bill's film PGS only two weeks prior. Bill expresses his thoughts and emotions without reserve and I felt his ups and downs quite vividly. Self deprecating and funny but ultimately his lessons truly resonated with me.
Read more
Helpful
Report abuse

Hiking Life
5.0 out of 5 stars Aussie Brings Laughs & Insights on the Camino
Reviewed in Australia on 14 March 2016
Verified Purchase
I loved this Camino book as Bill not only gave us insight into his walking travels but those of his own personal struggles into why he was doing the walk (not everyone is doing it for religious reasons and that's okay) and how he questions his faith, his thought processes in day to day life issues and takes a look at how his perceptions of those walking along side of him affect his walk, whether they be right or wrong. I enjoyed the armchair ride of this book and whilst training on my treadmill I devoured it in two days. I am planning on walking this Camino is Sept 2017 and am looking for my inspirations to prepare me mentally along the way - this book really did it for me.
I loved Bills' sense of humour (and yes I am Australian as well) and his ability to make the reader keep wanting to find out what happened next. I found myself with a tear in my eye as Bill nears the end of his journey and his own realisations are found. My husband who is not normally a reader of these types of books (only reads Wilbur Smith as his reading choice normally) could not put it down either and has found himself enjoying this book on the train to and from work each day and having to stifle laughing out loud. He is now wanting to join me on my Camino as well.
I wonder if Bill Bennett walked the Camino again what would be different and what other wonderful sights and insights he would find along the way. Highly recommended this book to all my friends and family.
Read more
One person found this helpful
Helpful
Report abuse

Amazon Customer
5.0 out of 5 stars Great read
Reviewed in Australia on 14 February 2020
Verified Purchase
if you have read books on the Camino, or if you have just become interested in this pilgrimage you will enjoy this book. It is written in a very real way, I laughed, I became frustrated but above all I learnt something that I can use in my own pilgrimage that is my daily life.
Read more
Helpful
Report abuse

Gary Drummond
5.0 out of 5 stars Awesome Book!
Reviewed in Australia on 21 November 2020
Verified Purchase
I absolutely loved this book. As soon as I picked it up I was totally engrossed.
It was like Bill was telling his story to a few mates over a couple of beers in a bar. It left me want more. So yep, a big thumbs up from me :-)
Read more
Helpful
Report abuse

Frances
5.0 out of 5 stars Best book for a pilgrim
Reviewed in Australia on 24 February 2017
Verified Purchase
I've read many books on the Camino and this has to be the best. Good description of the walk, the land and the growth of a person. Suitable for any long walking pilgrimage
Read more
Helpful
Report abuse

Elizabeth Sachse
5.0 out of 5 stars Funny, Inspiring and Informative
Reviewed in Australia on 11 October 2015
Verified Purchase
Foremost a autobiographical account of unexpected personal growth while walking 'The Way'. Told with 'laugh out loud' humour and unflinching personal insight, while maintaining a reverence for the pilgrimage and those who undertake it. Well written. Not a guide book.
Read more
One person found this helpful
Helpful
Report abuse

Shelley, Australia
5.0 out of 5 stars Great account of his journey, his Way
Reviewed in Australia on 15 March 2017
Verified Purchase
Told with humour and candour, makes one realise how amazing humans become when they become a pilgrim and how differently each person feels when they reach their goal. Wonderful journey
Read more
Helpful
Report abuse

Lynette Grae
4.0 out of 5 stars What a journey !!
Reviewed in Australia on 2 May 2018
Verified Purchase
A wonderful read. Loved travelling your journey with you. Thanks.
Read more
Helpful
Report abuse
See all reviews

sunflower
5.0 out of 5 stars Absolutely loved this story!
Reviewed in the United Kingdom on 19 February 2014
Verified Purchase
I loved this story by Bill Bennett, it was easy to read. I would love to do the Camino one day, but somehow don't think I could walk 800km with a 10kg bag on my back. I admire Bill Bennett for doing the Camino walk in one month despite being in pain with his blistered feet and wonky knee. He met all sorts of interesting people along the way. The book is full of good humour and I laughed at the descriptions of the Italian Pilgrims in their designer gear stepping of a luxurious coach for photographs and only to take off again! The only thing I can say now is that I will miss this book, I enjoyed my own little Camino trip each night, even though it was only through a book! Well done Bill Bennett, I do hope this won't be your only adventure and we shall see another book soon!
Read more
5 people found this helpful
Report abuse

Terry McHugh
5.0 out of 5 stars A funny Camino
Reviewed in the United Kingdom on 15 March 2015
Verified Purchase
Hilarious. I know that is not a word you may expect when you pick up 'yet another camino book' but this is not just 'another camino book'. It is written from a very refreshing point of view that holds your attention to the last page and then disappoints because there is no more. Every book about the camino at some point refers to the blisters, the tendonitus, the blown knees and the sore backs but up to now I never heard of anyone having a conversation with their 'triumverate of pain'. Bill Bennett stayed in many of the same places I did, met similar people and experienced the same ups and downs. Just wish I could have written my book half as well. If you must read one book on the camino, this is the one
Read more
4 people found this helpful
Report abuse

Gozzerr50
5.0 out of 5 stars Fastinating read
Reviewed in the United Kingdom on 11 April 2020
Verified Purchase
This book is a great read whether you are planning to walk the Camino or whether you have already walked it. Having walked the Camino in 2017 I fully understand the physical and see notional state the author was in. I could picture in my mind many of the p ok aces described with writing. Thank you
A wonderful read
Read more
Report abuse

Alastair Wilson (Author) Santiago On Two Feet
5.0 out of 5 stars A very enjoyable Camino read which I would recommend.
Reviewed in the United Kingdom on 13 May 2018
Verified Purchase
This is a very good account of his Camino adventure which was enjoyable to read, and like so many pilgrims, including myself, the Camino humbled him, changed him and I wonder if that is still the case. A great book for anyone to read that enjoys being out in the fresh air and just walking, especially on new landscapes each day.
Read more
Report abuse

M. Rabanal
5.0 out of 5 stars Brought the journey to life
Reviewed in the United Kingdom on 7 October 2014
Verified Purchase
Absolutely loved this book. Having driven alongside the Camino de Santiago whilst visiting family in Galicia, I started to consider trying to do part of the Camino on horseback. Looking into that led me to find this book. Bill's journey is beautifully described and I felt his pain and joy, laughed and even had tears prickling at times, reading this. The only problem is I think I'll now feel a bit of a fraud if I do ride the Camino!
Read more
One person found this helpful
Report abuse
See all reviews
Report an issue
Does this item contain inappropriate content?
Report
Do you believe that this item violates a copyright?
Report
Does this item contain quality or formatting issues?
Report