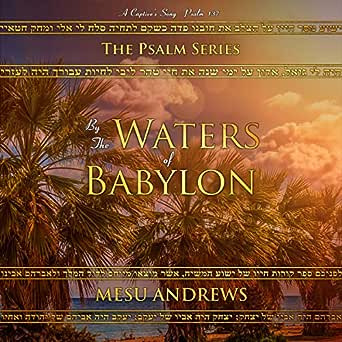 By the Waters of Babylon: A Captive's Song - Psalm 137

Fiction Aficionado
TOP 500 REVIEWER
5.0 out of 5 stars Enthralling!
16 August 2018
Format: Kindle EditionVerified Purchase
It requires a writer of keen insight to take one of the worst times in Jewish history and turn it into a story of hope. That’s exactly what Mesu Andrews has done in this novella telling of the exile of the Israelites to Babylon. Through the eyes of Merari, an Israelite woman who has known great grief, and Idan, a Scythian prince who fights with King Nebuchadnezzar’s troops, we experience two very different sides of the exile—and neither side is pretty, although the harsh realities are portrayed as sensitively as they can be.

From the moment Idan mistakenly believes Merari to be the goddess Tabiti in human (and very broken) form, I was enthralled. I had absolutely no idea how the story would unfold over the long journey to Babylon, and each new development sucked me further in. I admired Merari’s inner strength, and I loved the way you could see Yahweh working for the good of these characters even as his righteous judgement is meted out.

I don’t want to spoil any part of the story, so I will simply say that for me, one of the most powerful moments was when one of the characters lay severely injured, unable to fulfil his normal duties as a soldier. Despite his pain, he expresses his absolute trust in his commander, which Merari questions, considering how often she has heard him argue and even fight with his commander. His response was simple, and yet profound. When able-bodied, he was much better at doing whatever he thought it took to protect his commander rather than simply trusting and obeying. Now, he had no choice; he could only trust and obey. What a humbling lesson to learn!

Like Merari, I also became more and more anxious to know if she would find her husband at her journey’s end. I’m not going to say, of course, but I do promise this story will hold you in its grip until the very last page.

I received a copy of this novella from the author. This has not influenced the content of my review, which is my honest and unbiased opinion.

Peter Wallace
4.0 out of 5 stars Great Story
9 August 2018
Format: Kindle EditionVerified Purchase
Thanks you for a great read. Really enjoyed this book especially the ending!!
Quick comment on other books is that the ending is too quick, yet this one was right. Thanks again
Read more
Helpful
Comment Report abuse

Allen Simmons
5.0 out of 5 stars We all have choices to make
5 August 2018
Format: Kindle Edition
Menu Andrews has crafted an enthralling story of war and captivity; tragedy and suffering; and love lost and found around Psalm 137. It is immaculately researched and her fictional creations fall seamlessly into the narrative. She brings to the fore the God of Love who never forsakes those who hold fast to Him, no matter the circumstances. This is the second in the Psalms series. I received an advanced reader copy and have also purchased the book. I thoroughly recommend not only this title but the whole series.
Read more
Helpful
Comment Report abuse

Kindle Customer lee
5.0 out of 5 stars Great
14 May 2019
Format: Kindle Edition
Started reading and couldn't put it down .
Showed how the pain they suffered.
I will read again so i can lea rn more.
Read more
Helpful
Comment Report abuse
There are 4 customer reviews and 5 customer ratings.
See all 4 customer reviews
Write a customer review
Get FREE delivery with Amazon Prime
Prime members enjoy FREE Delivery and exclusive access to movies, TV shows, music, Kindle e-books, Twitch Prime, and more.
> Get Started
Back to top
Get to Know Us
Make Money with Us
Let Us Help You
And don't forget:
© 1996-2020, Amazon.com, Inc. or its affiliates