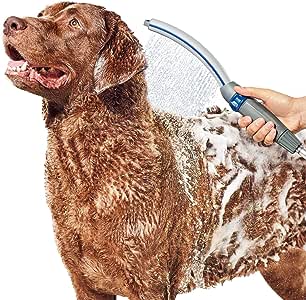 Engineered from the ground up with you and your dog in mind, the 13-inch Pet Wand Pro dog shower attachment for indoor-outdoor use (PPR-252) is the fastest and easiest way to wash your dog at home. This professional-grade contoured wand washes dogs of all shapes and sizes. The Pet Wand Pro dog shower attaches indoors to a standard shower head pipe or outdoors to a garden hose. Its unique water comb spray provides maximum cleaning coverage and the power you need for effective rinsing of thick fur, while the targeted narrow spray is perfect for hard-to-reach or sensitive areas. With one-handed operation, the easy select dial allows you to customize the water pressure and control the spray settings. Your dog will benefit from a faster and more thorough cleaning, and you can spend more quality time with your pet. Note: due to regulatory requirements related to replacement shower head flow rates, this model is not available for purchase by residents in the States of California or Colorado – and in New York city.

4.7 out of 5 stars
4.7 out of 5
3,963 global ratings
How are ratings calculated?
To calculate the overall star rating and percentage breakdown by star, we don’t use a simple average. Instead, our system considers things like how recent a review is and if the reviewer bought the item on Amazon. It also analyses reviews to verify trustworthiness.

seastorm
5.0 out of 5 stars Worked great on my giant breed dog
Reviewed in the United States on 21 September 2018
Size: 2.5 GPMColour: for Fast and Easy at Home Dog Cleaning, Blue/GreyVerified Purchase
My poor pup recently started having skin/coat issues and I need to give him weekly baths (he says, "NO BATH EVER"). It was a traumatic battle of wills and strength for both of us, and one where I had only a slight advantage. And believe me, there is nothing more sad than a 125lb dog sitting in the tub with a look of utter resignation.

And then the actual bath part starts. I was using the master bath in my bedroom because it has a hand held shower head with a short hose. Basically, the hose was long enough to allow me to wash one side of him at a time. And since he absolutely refused to turn around (his butt must absolutely stay planted in the corner of the tub at ALL times, "NO STICK HEAD IN CORNER EVER" he say), one side is all we washed. So I went looking for a better option and happened to see this on a Lighting Deal. Stuck it in my cart, did some quick research, looked great, good reviews, and then for some reason I decided not to buy it.

Fast forward two baths later...I'm soaked head-to-toe, he's not soaked at all but somehow still covered in shampoo, the entire bathroom floor is flooded, there is water dripping from the ceiling, and I've used up every towel in the house. And then I made the mistake of turning slightly, giving him an extra 2" gap between me and the tub wall. Within seconds he had launched all 125lbs of himself out of the tub and directly onto the linoleum, which of course resulted in him immediately extending his doggy nails and sliding frantically spread eagle across the floor, finally collapsing into a pile against the far wall. I felt utterly defeated. This just could not be any worse. Then he stood up and frantically shook, spraying doggy shampoo right into my gaping mouth. Something had to change.

I came back to Amazon, put this and a shower mat in my cart, and checked out without any hesitation. Installation took less than 5 minutes. Next bath the shower mat encouraged him to actually go in the tub without an extended wrestling match. And I was able to wet all of him down with so little effort. It was easy to hang the wand on the suction cup when I didn't need it. With the full spray, there was enough water pressure to wet down the thick downy fur on his back end. I was able to carefully wet up under his legs and tummy using the narrow spray and reduced water pressure. One-handed operation was a little tricky at first, but I got it eventually. Best of all, the hose was long enough to reach his back side at the far end of the tub. I'm really surprised at how well it worked because my closets are stuffed with doggy gadgets and toys I thought would be awesome and then never used.

Only comment is that I wish you could turn the dial on the wand and completely stop the water, but instead there is always a little trickle. Because it was hanging on the suction cup, and because of the layout of my bathroom, that little trickle bounced off the wall of the tub and right into my face. I finally just stuck it into the water in the tub.

Bottom line, if you're a doggy parent, this is a great investment that will make you're doggy bathing life a lot easier. It could easily be used on my short-haired 10lb dog as well. And with the $10 Waterpik rebate, it's very reasonably priced. I'm considering buying another to put outside for washing down my lab after her ocean swimming, woods tromping, mud puddle splashing adventures and for all those rainy day muddy paws.

Trace Chapman
3.0 out of 5 stars Think about a simpler option
Reviewed in the United Kingdom on 20 September 2019
Size: 2.5 GPMColour: for Fast and Easy at Home Dog Cleaning, Blue/GreyVerified Purchase
Very expensive for the promise vs the reality - it leaks and at the end of the day is a basic plastic shower head - you’d be better off creating your own solution.
Read more
Report abuse

allan tucker
1.0 out of 5 stars Does not connect to uk outdoor hose
Reviewed in the United Kingdom on 4 September 2019
Size: 2.5 GPMColour: for Fast and Easy at Home Dog Cleaning, Blue/GreyVerified Purchase
Wanted to use this for horse and dogs but cannot attach it to uk outdoor hose directly or with standard fittings. Quality is such that would not withstand too much outdoor use! Wanted to return but cost more in postage than did to buy . Could not find suppliers return policy to check if would get postage refunded.
Read more
Report abuse

shamski77
4.0 out of 5 stars Great Product but Pause doesn't fully shut off water
Reviewed in Canada on 6 May 2020
Size: 2.5 GPMColour: for Fast and Easy at Home Dog Cleaning, Blue/GreyVerified Purchase
Got this for an outdoor dog wash station I am building for our new adoptee who appears to be a bird dog and greatly enjoys chasing the geese and ducks in the lake. Sigh.
Almost everything you need comes in the box. We are hooked up to an outdoor hose so haven't used the diverter so can't comment. The connections to the outdoor hose is quick and easy. The only thing I haven't liked regarding the wand is that the pause feature (it has two streams of water available by turning a dial, and pause is the stop inbetween those streams when turning the dial) continues to drip water from the wand ... it is NOT a complete shutoff. Reading other reviews online this is a common thing identified about the wand. Sorry, but expected a full pause for -1 star.
The coverage sprays (one wide, and one narrow) are sufficient, and the pressure (which depends mostly on your house pressure and run of line to the wand) is very good for rinsing out the shampoo suds. We hooked up to a mixed line of warm water so the pups now like getting a spray down :-) ... which is currently occurring every few days with our bird dog.
Read more
3 people found this helpful
Report abuse

kataflok
5.0 out of 5 stars Just spend the money
Reviewed in Canada on 27 April 2020
Size: 2.5 GPMColour: for Fast and Easy at Home Dog Cleaning, Blue/GreyVerified Purchase
This is now dog-washer #3 I've purchased through Amazon. (The first two disintegrated almost instantly and got returned - considering they were both 1/2 the price, I guess you get what you pay for.)

This one, I'm keeping.

I realize this is a rather low bar for happiness with a product, but I was pleasantly surprised to finally have a product arrive with all needed fittings and where all of the fittings ACTUALLY FIT standard North American plumbing.

The product is well designed and cut the wash time for our long haired dog by about 50%. It's hose is more than long enough and the manufacturing of the product seems strong and solid. The designers of this thought through all three possible use cases of Bathtub/Shower, Washtub/Sink or Garden hose in the BackYard and provided adapters to allow all three uses.

My only complaint is that there is no swivel on the wall end of the hose necessitating twisting the entire hose to attach it to a garden hose connection (which our washtub has. We're currently waiting for a Gardinia quick hose coupler to arrive to fix that.

But, all around, would buy again.
Read more
3 people found this helpful
Report abuse
See all reviews
Get FREE delivery with Amazon Prime
Prime members enjoy FREE Delivery and exclusive access to movies, TV shows, music, Kindle e-books, Twitch Prime, and more.
> Get Started
Back to top
Get to Know Us
Make Money with Us
Let Us Help You
And don't forget:
© 1996-2020, Amazon.com, Inc. or its affiliates