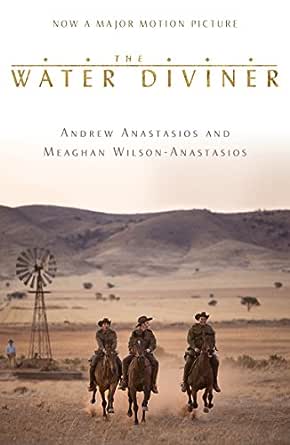 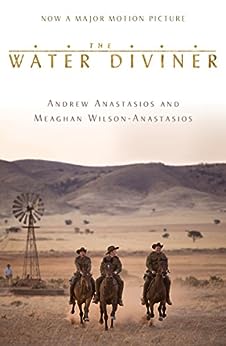 In 1919 an Australian father arrives at the Gallipoli battlefield to recover the bodies of his three sons, only to find hope where he thought there was none. --This text refers to the paperback edition.

Andrew Anastasios is a script researcher and writer for film and television via a career in archaeology, journalism and advertising. Andrew's credits include the Jack Irish telemovies and the adaptation of Peter Temple's Broken Shore. He co-wrote the film script for The Water Diviner with Andrew Knight. Meaghan Wilson-Anastasios, also a former archaeologist, has a PHD in art history and cultural economics. She teaches, researches and writes for film and television. --This text refers to an alternate kindle_edition edition.

Andrew s working life began in archaeology. Armed with a Masters in History and Archaeology from the University of Melbourne and a trowel from the local hardware store, he worked extensively on excavations throughout the Middle East and Turkey. Having failed to locate the Ark of the Covenant, and on the brink of starvation because of the lousy pay, it was time for Andrew to find a proper job. Instead he began working as a freelance writer. He had a weekly interview-based column in The Age newspaper, Australia s premium daily broadsheet, and was a regular contributor to Vogue Living. --This text refers to the mp3_cd edition.
Read more

AWM
4.0 out of 5 stars Moving portrayal of grief-stricken father's stubborn love
Reviewed in Australia on 4 May 2016
Verified Purchase
I loved this book. I wasn't sure at the start but the story drew me in and I was captivated by the quest of Connor, a rough-edged Australian water diviner, as he searched for his three sons presumably killed at Gallipoli, during the first world war. This first novel by Andrew Anastasios and Meaghan Wilson-Anastasios. Andrew was co-writer for the script of the film "The Water Diviner" and this is the book of the film. The story and characters are what draw you into this book rather than the beauty and craftsmanship of the writing itself. Which I think is why it took me a little bit of reading before I was convinced. Gallipoli is huge in the consciousness of Australians and the timing of this book is perfect given that we are in the midst of the centenary commemorations of the first world war from 2014-2018. Another interesting thing that this book captures is the consequences of what happens following the end of war. We often only focus on the events of war and Connor finds himself in the midst of the Greek Turkish tensions following WW1 and the involvement of the British and other nations in managing or not managing this post war situation. In the end I was deeply moved by the book and its led me to watch the movie.
Read more
Helpful
Comment Report abuse

Broomlee
5.0 out of 5 stars Heart wrenching story
Reviewed in Australia on 15 January 2015
Verified Purchase
What an amazing story. Could not put this book down. One did not have to work too hard to picture the scenes and heart wrenching emotions. Brilliantly written, obviously for the film. A very timely story. It was very interesting seeing through not only Australian but the. enemies eyes as well. What were we doing there! Having travelled recently to Turkey it was easy imagine the peninsular, Blue mosque etc. Well written, easy to read,and couldn't put it down.
Read more
One person found this helpful
Helpful
Comment Report abuse

Danny
5.0 out of 5 stars Would Definetly Recomend This Book
Reviewed in Australia on 20 June 2015
Verified Purchase
Having seen the movie before reading the book I was hesitant to purchase the book but did so after reading other reviews saying how well the story was written by the author. I am so glad I did as the author has a way to make you feel you are there with the characters throughout the story. Having seen the movie first only enhances this experience without jumping ahead of the story. This was one of those books I found hard to put down.
Read more
Helpful
Comment Report abuse

Scotty
4.0 out of 5 stars a good plot and relevant to current historical anniversy,s
Reviewed in Australia on 14 April 2015
Verified Purchase
An excellent plot , as this novel is relevant to the anniversary of the Gallipoli Landings , there is a sense of understanding the feelings of the family in this novel.I live in this district of Victoria and the description of the area is excellent , the desperate dry , dusty and windy conditions exist . A good portrayal of a stubborn Aussie , a real Bushy , stubborn and hard headed and a bit naive in the ways of the world . the book had a couple of flat spots . Overall a good read.
Read more
One person found this helpful
Helpful
Comment Report abuse

david john truelove
2.0 out of 5 stars OK and maybe very good
Reviewed in Australia on 8 April 2015
Verified Purchase
This was bought for me, and initially I was less than impressed with the story. I am part way through it now, and much more impressed. I sense that the author has researched his (?her- it is not open before me at the moment) background well and am finding the fictional but probably factual presentation of Istanbol/Constantinople/Byzantium quite credible - and fascinating. I have not visited the city, but have bummed around a bit and only the (planned) accident of children interrupted my (also planned) visit there. The story (so far) of a widower seeking his sons lost in a battle far away tugs at me in ways I do not care to describe, and I feelthat I would raise its "star" rating once Ifinish the book.

BTW this computer cannot s[pell: I have got tired of fixing its mistakes, and I AM stone cold sober

Frances
5.0 out of 5 stars excellent well written
Reviewed in Australia on 25 December 2014
Verified Purchase
Easy to visualise I found it to be an excellent account from both sides which is refreshing. Have recently visited Canakkale and istanbul and the description was true to my eyes and senses. I look forward to seeing the movie. Refreshingly different look at this terrible time for Australians
Read more
2 people found this helpful
Helpful
Comment Report abuse

Gerry
5.0 out of 5 stars Entertaining and Informative
Reviewed in Australia on 16 March 2015
Verified Purchase
I didn't know anything about this story, other than the basic premise I gleaned from the movie preview. In short, this is a great read. It is well written, well paced and I felt a connection to the characters. The writer transports you, quite effectively, to the shores of Gallipoli and beyond and I learnt quite a bit about the conflict and its terrible toll.
This an adventure tale with a deep underlying message and it is well worth a read. Great book!
Read more
One person found this helpful
Helpful
Comment Report abuse

Kate Hobson
3.0 out of 5 stars reads like a movie script
Reviewed in Australia on 15 February 2015
Verified Purchase
I give it 3, just. For once I think the movie will be better. That it has attracted so much hype is remarkable. The tendancy to over wrjte the Australian conditions (I am Australian and grew up on a property like the one in the book) was annoying and unlike some reviewers I was not inclined to laugh or cry...it simply wasn't believable enough to generate any emotions. A father "divines" his son's skeletons under the ground amongst thousands of other bodies after 4 years? Please!
Read more
Helpful
Comment Report abuse
See all reviews

It is four years since Connor's three sons left rural Australia to fight at Gallipoli. They never came back, like so many others. He sets out to find them.

Chance leads him to the Otel Troya in Istanbul, where the owner has something of a down on Australians - her husband too went to Gallipoli, or rather Çannakale, and never returned. But things change.

Undeterred by official indifference, Connor finds his way to the battlefield, where he meets the Turkish officer who fought there. They strike up - not a friendship, but perhaps a comradeship. He is able to find two sons. The Turk is able to tell him that the missing son was taken captive. They head east, the Australian to find his son, the Turk to fight for Turkey in the internecine wars that are raging.

I was moved by the book, by the unlikely friendships, and by the vision of a nation in turmoil. And what blithering idiot thought it would be a good idea to invade somewhere by landing at the foot of a cliff?
Read more
One person found this helpful
Report abuse

Amazon Customer
5.0 out of 5 stars A real page turner.
Reviewed in the United Kingdom on 23 August 2019
Verified Purchase
I loved this book, an emotional journey that opened my eyes to many cultural discoveries. It is, in my opinion a travelogue through time as well as Turkey exploring prejudices still alive today unfortunately. The audible version really made the story come alive as Connor's character as the plot unfolded. I know this will become my go to book for helping me to keep an open mind with regard to the misinformation about refugees and their negative reputation. There are real people's stories amongst these pages.
Read more
Report abuse

Mrs DeniseMeaney
5.0 out of 5 stars Just brill no other words needed
Reviewed in the United Kingdom on 29 February 2016
Verified Purchase
Just brill no other words needed
Read more
Report abuse
See all reviews
Get FREE delivery with Amazon Prime
Prime members enjoy FREE Delivery and exclusive access to movies, TV shows, music, Kindle e-books, Twitch Prime, and more.
> Get Started
Back to top
Get to Know Us
Make Money with Us
Let Us Help You
And don't forget:
© 1996-2020, Amazon.com, Inc. or its affiliates