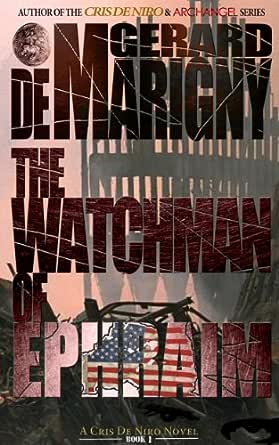 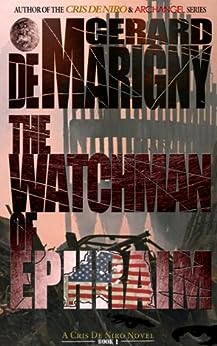 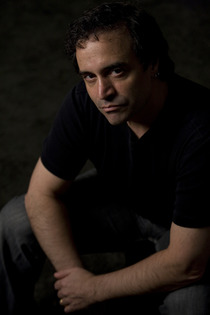 Cris De Niro worked his way up to the top of the hedge fund world. Yet all of his money couldn't protect him from losing his wife on 9/11. 10 years have passed since the tragedy. Turning to his faith, De Niro now lives for a higher purpose. He acquires a lackluster counter-terrorism agency, in order to transform it into The Watchman for the United States, but there's not a moment to lose.

De Niro and his new agency unknowingly become targets when they stumble upon a connection between a rich Iranian businessman and a Mexican drug cartel. First, their agent sent to investigate goes missing and then strange events start to unfold at the border. Making matters worse, they suspect that there’s a leak among them. It’s up to De Niro and his new team to protect America from a possible terrorist attack more catastrophic than 9/11 …and it appears he and his children are targeted too!

With his bestselling debut political thriller, THE WATCHMAN of EPHRAIM, Gerard de Marigny has burst upon the literary world stage with vigor and poise! Founding JarRyJorNo Publishing in January 2011, de Marigny dons many hats, that of publisher, graphic designer, marketer, as well as author. The result, so far, has been a sparkling debut novel that became a #1 Amazon Bestselling Geopolitical Thriller! On July 4th, de Marigny embarked on his 75-day PATRIOT Blog Tour making over 50 appearances on book reviewers sites located all over the world, garnering stellar reviews and raves along the way. In July, de Marigny also sat down for an up-close and personal interview with Philip Norbert of Kingmaker Productions. Shot by famed Cinematographer Jay Nemeth of Flightline Films, the Q&A session has garnered over 5,000 viewers on YouTube. Before writing fiction, de Marigny was the lead guitarist for 80's rock band, AMERICADE. Though the last lineup of the band broke up in 1995, de Marigny was approached by Aaron McCaslin, President of Retrospect Records, a label dedicated to promoting heavy rock bands from the 80's. A lifelong fan himself, McCaslin offered de Marigny a record contract. In return, de Marigny supplied Retrospect Records with every recording, whether previously released or not, in his possession. The result has become a remarkable 70-song, 4-CD boxed set branded, AMERICADENCE: 1980 1995. Says de Marigny, "It's an amazing feat what Aaron pulled off. He literary brought back to life just about the entire musical catalog of AMERICADE ... and the timing couldn't be better!" The boxed set will include a discount coupon for signed paper or eBook editions of both books in the CRIS DE NIRO series. November 2011 brought BOOK II of de Marigny's CRIS DE NIRO series, SIGNS of WAR and the author is already at work writing BOOK III, RISE to the CALL due out in spring 2012.
click to open popover

Jos - The Bubbly Book Reviewer
5.0 out of 5 stars Family, friendship, loyalty, terrorism, convincing characters and a fast-moving plot.
26 January 2020
Format: Kindle EditionVerified Purchase
If you like a good guys versus bad guys action story, this book is for you. de Marigny swept me up with the characters and the plot from the start and at each stage, I knew something was going to happen, but I didn't know what. With lots of money to splash around and cool toys to use the main character spoke to the computer nerd in me.
A satisfying ending (no spoilers from me) that concludes this storyline, but leaves me wanting to read the next book in this series so I can to get to know the characters better.
I could see this book as a movie while I was reading it.

I would like to thank "Voracious Readers Only" and author Gerard de Marigny for my complimentary copy in exchange for an honest review.

Dorothy Johnson
5.0 out of 5 stars Fiction or fact .. the story is that good you cannot tell
29 November 2019
Format: Kindle EditionVerified Purchase
Amazing book .. fantastic storyline , the story is gripping personal and believable... characters are built , I could not put this book down ... would make a fantastic movie ... cannot wait to read book 2 and see the intrigue continue ... books was gripping, yet easy to read ... I am definitely a fan of this author for life
Read more
Helpful
Comment Report abuse

bev h
4.0 out of 5 stars Keeps the reader wanting to turn the next page all through the story.
19 December 2019
Format: Kindle EditionVerified Purchase
An introduction that put one in the pilot's seat, ready for takeoff, action, curiosity, suspense, and accomplishment.
Easily read thriller

Cledimar Rivero
5.0 out of 5 stars Incomplete review - only the first 12 chapters
14 February 2020 - Published on Amazon.com
Format: Kindle EditionVerified Purchase
I apologize for this, I am never one to give a partial review of a book I'm reading because you can always change your mind before you reach the end. In this case, I needed to do this because the story is riveting, I am captivated! Cris De Niro is a very human character, who goes through hell and back, faces the worst, and tries to make the best of it with what little he has. I started reading this book at about 10 last night and said to myself: "ok, I'll just read the first chapter to see what's this all about and then go to sleep". Long story short, I suddenly noticed I was beginning chapter 13 and it was 3 in the morning, and I didn't even feel sleepy! Wonderful story!
Read more

Sunnybrook
5.0 out of 5 stars We are fast becoming what we soon shall be.
1 June 2016 - Published on Amazon.com
Format: Kindle EditionVerified Purchase
As a reader of and avid fan of geopolitical thrillers, I found this author's plot imaginative and just plan good. (I liked his motivational blogs as well.) The world we live in is increasingly violent and ugly. This is a timeout from that setting. I simply cannot believe that there is nothing we an do about heinous hatred and violence. The most disturbing thing to me is that changing these acts is not something that can be done by politicians and laws. The change has to originate in each human heart and be a result of a code of morality learned by Judeo-Christian study. As we know that is not something that is valued globally. In fact it is very hard to find anywhere. Our churches are empty. Our families are broken. Many times we are amoral. We are fast becoming what we soon shall be. As a daily reader of the Bible, I believe. In closing, the mindset of the author, represents an acorn. And we all know the result that planting such an acorn can have, if we give it the nurturing it needs. Loved the book and look forward to reading more of them this summer in our reclusive summer home in the Outer Hebrides. Keep up your wonderful work Gerard!
Read more
2 people found this helpful

S. L. Hunter
5.0 out of 5 stars Espionage and security.
21 August 2019 - Published on Amazon.com
Format: Kindle EditionVerified Purchase
An excellent thriller.the story flows naturally from one scene to the next. Very emotional and relevant to 2001, 2011, and now (2019). The plot twists were not predictable but were met by men trained in Guerilla warfare tactics. Very believable actions, settings with open dialogue. Appealing to both thriller fans and new readers. With more to come in the series.
Read more
One person found this helpful

Heliosue
3.0 out of 5 stars Christian Conservative Billionaire Takes on Terrorists
7 September 2019 - Published on Amazon.com
Format: Kindle EditionVerified Purchase
Interesting premise: Billionaire with all of the cliched trappings devotes his money and uses his faith to fight terrorists following 9/11. This is the first book in the series which may explain (not excuse) the many editorial and proofreading flaws. Hopefully, the following books were more carefully edited. My own personal preference would have been to give this read a one star, but if you are a reader who enjoys political thrillers with a heavy emphasis on a man and his religious beliefs, you may very well like this book.
Read more

della s
4.0 out of 5 stars Enjoyable reading
13 October 2019 - Published on Amazon.com
Verified Purchase
Received this book as part of Voracious Readers. A very entertaining book and an enjoyable read.
The timeline at the beginning was confusing as Chris Di Niro was said to travel to Argentina. I don't know if this was before or after 9/11. He hired an Argentine gaucho, but I thought he was living in NJ at the time, not at the ranch he bought in Nevada after 9/11.
Some overlooked editing on grammar.
All in all, I do recommend this book.
Read more
One person found this helpful
Go to Amazon.com to see all 79 reviews 4.3 out of 5 stars
Get FREE delivery with Amazon Prime
Prime members enjoy FREE Delivery and exclusive access to movies, TV shows, music, Kindle e-books, Twitch Prime, and more.
> Get Started
Back to top
Get to Know Us
Make Money with Us
Let Us Help You
And don't forget:
© 1996-2020, Amazon.com, Inc. or its affiliates