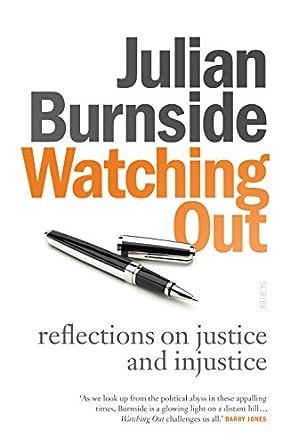 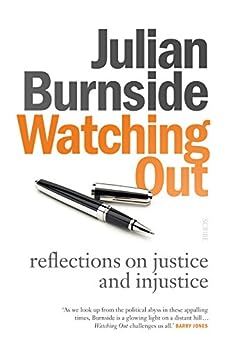 Watching Out: reflections on justice and injustice Kindle Edition

"Barrister and human-rights advocate Julian Burnside achieves the near impossible in this study-he makes the law sound interesting."
--Steven Carroll, The Saturday Age

"As we look up from the political abyss in these appalling times, Burnside is a glowing light on a distant hill. His writing is lucid, poignant, powerful. He distinguishes between law and justice, urging us to be both compassionate and analytical, collecting evidence, making rational conclusions, acting on them courageously, and telling truth to power. Watching Out challenges us all."
--Barry Jones

"If you've ever wondered why lawyers are compelled to defend the indefensible, or the difference between a solicitor, barrister and QC, this is the book for you. It is a fascinating account of the justice system brought to life by many rich case studies."
--The Echo

"A fascinating read for anyone who burns with a passion for human decency and an interest in ethics."
--Sunday Telegraph

"...eminently accessible to a lay audience...even strangers to the law will find it an edifying, rewarding examination of what it means to secure justice...Burnside's technical legal mastery is brought to bear in limpid prose imbued with a rare empathy and moral intelligence. It deserves to be read and reread by all those with a concern for justice."
--John Eldridge, Australian Book Review

Julian Burnside, QC, is an Australian barrister who specialises in commercial litigation and is also deeply involved in human-rights work, in particular in relation to refugees. He is a former president of Liberty Victoria, and is also passionately involved in the arts: he is the chair of Melbourne arts venue fortyfivedownstairs, and regularly commissions music. He has published a children's book, Matilda and the Dragon, as well as Wordwatching, a collection of essays on the uses and abuses of the English language, and Watching Brief: reflections on human rights, law, and justice. --This text refers to the paperback edition.

Rich with fascinating case studies, and eloquent in its defence of civil society, Watching Out is a beacon of legal liberalism in an intemporate age. --This text refers to the paperback edition.
Read more