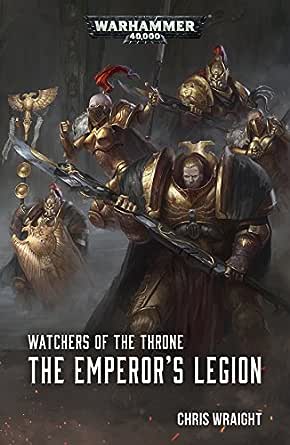 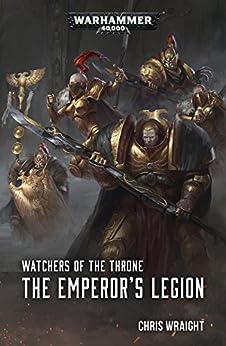 The Emperor's Legion (Watchers of the Throne Book 1) Kindle Edition

Chris Wraight is the author of the Horus Heresy novels Scars and The Path of Heaven, the Primarchs novel Leman Russ: The Great Wolf, the novellas Brotherhood of the Storm and Wolf King, and the audio drama The Sigillite. For Warhammer 40,000 he has written Vaults of Terra: The Carrion Throne, Watchers of the Throne: The Emperor’s Legion, the Space Wolves novels Blood of Asaheim and Stormcaller, and the short story collection Wolves of Fenris, as well as the Space Marine Battles novels Wrath of Iron and War of the Fang. Additionally, he has many Warhammer novels to his name, including the Time of Legends novel Master of Dragons, which forms part of the War of Vengeance series. Chris lives and works near Bristol, in south-west England.  --This text refers to the paperback edition.

4.7 out of 5 stars
4.7 out of 5
180 global ratings
How are ratings calculated?
To calculate the overall star rating and percentage breakdown by star, we don’t use a simple average. Instead, our system considers things like how recent a review is and if the reviewer bought the item on Amazon. It also analyses reviews to verify trustworthiness.

JPS
5.0 out of 5 stars Imperial Guardians
Reviewed in the United Kingdom on 5 February 2018
Verified Purchase
This is a rather superb title that I will rate five stars for a number of reasons. The first is that most of the action takes place on Terra and in and around the Imperial Palace in particular, with the Custodes taking centre stage. The author has, in this respect, very well rendered an atmosphere of decay and decadence, with large parts of the Palace Complex having been abandoned and areas of the megalopolis where the enemy plots, bids its time and attempts to penetrate the Palace.

A second set of interesting features is the way the story is told by and through the perspective of its three main characters.

First there is Tieron, the human, ageing and cynical Chancellor of the Council of the Lords of Terra, who finally drops his traditional neutrality and conservatism and becomes an agent of change. The character with all his doubts and uncertainties, but also his moral and physical courage despite being no warrior was, in my view, particularly well-drawn with all his human flaws and strengths in such a way that he appears to be perhaps the most sympathetic.

Then there is the Custodian and Shield-Captain Valerian, with his own set of values as one of the Ten Thousand guardians of the Throne who also sees the growing need to break the centuries old routines as he and his brethren are faced by the increasing pressures and menace of an invasion by the forces of Chaos. A rather good feature is a night assault by these forces against the Gates of the Palace. Another one is Valerian’s hunt through the empty corridors and rooms of the half-abandoned Palace and his fight to the death against a Chaos Space Marine who has managed to get in despite all the security measures. Valoris – the Captain General – and his two Tribunes are also particularly impressive in their golden and shining armour and might, even if they are somewhat less original and complex characters.

The third character and narrator is the unyielding Aleya of the Silent Sisterhood, exiled from Terra long ago and which, at the beginning of the book, returns to her secret convent to find it raided, destroyed and full of the dead bodies of her Sisters. Both she and the Custodian, with the help of Tieron, will become the vanguard of the Empire’s counter-strike lead by the Emperor’s Avenging Son against the last Black Crusade of Abbaddon whose fleet advances on Terra through the Warp.

Kindle Customer
5.0 out of 5 stars Great book- Must read for 40K fans
Reviewed in the United Kingdom on 30 September 2017
Verified Purchase
Great read, it has fleshed out the background of the Custodians and the Sisters of Silence (in the 40K timeline rather than 30K). I found the pacing and characters kept me hooked. If you are looking for more fluff on "current" 40K, after the launch of the 8th edition of the wargame-buy this book.
Read more
6 people found this helpful
Report abuse

Amazon Customer
5.0 out of 5 stars A brilliantly crafted story!
Reviewed in the United Kingdom on 1 October 2017
Verified Purchase
This well crafted story form Chris Wriaght shows why he is so highly thought of as an author.
The story is told by three POV characters and is written in the first person to give the book a personal feel and encourages the reader to feel like they are part of the action.
The story is set during the Gathering Storm and shows how those on Terra react to the events that unfold.
Any fan of 40K and the new timeline and events should make this the top of their To Read pile.
Read more
Report abuse

Mechanic
5.0 out of 5 stars Excellent, A Must Read!
Reviewed in the United Kingdom on 17 November 2018
Verified Purchase
One of the best 40k novels I have ever read. A must read!
Read more
One person found this helpful
Report abuse

Kindle Customer
5.0 out of 5 stars A New Era for The Imperium
Reviewed in the United Kingdom on 14 December 2018
Verified Purchase
Another great read by Wraight. Chronicling the events that shaped a new era for The Imperium, with strong characters and an interesting 3-person approach, Draught weaves a great tale!
Read more
Report abuse
See all reviews
Get FREE delivery with Amazon Prime
Prime members enjoy FREE Delivery and exclusive access to movies, TV shows, music, Kindle e-books, Twitch Prime, and more.
> Get Started
Back to top
Get to Know Us
Make Money with Us
Let Us Help You
And don't forget:
© 1996-2020, Amazon.com, Inc. or its affiliates