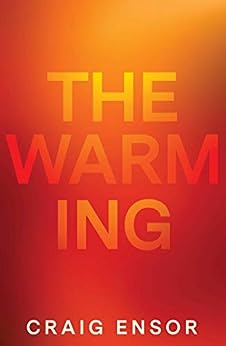 Craig Ensor is a partner at a leading commercial law firm.
He lives in Sydney with his wife and two children. He has published numerous short stories and The Warming is his first published novel.
--This text refers to an alternate kindle_edition edition.

2.8 out of 5 stars
2.8 out of 5
4 global ratings
How are ratings calculated?
To calculate the overall star rating and percentage breakdown by star, we don’t use a simple average. Instead, our system considers things like how recent a review is and if the reviewer bought the item on Amazon. It also analyses reviews to verify trustworthiness.

Monica Mac
TOP 100 REVIEWER
3.0 out of 5 stars Really made me think.
Reviewed in Australia on 5 July 2019
This was a languid, wordy book that took me quite a while to get into. For the first third of it, I wasn't sure that it was the book for me, it was full of prose (bordering on the purple, in some cases) and I was wondering what it was all about.

And then, it hit its stride and I was glad that I persevered.

Yes, this book is about the effects of global warming on Australia (and as an Australian who has lived in many different parts of it, I could visualise the settings quite well), but that was just a tiny part of it. It was about Finch and April's relationships; with each other, with their family and also April's first husband. It was quite poignant in parts and I found myself getting emotionally involved.

If you want a straight, end-of-the-world kind of book, this isn't it. It is sobering to realise that the author's vision of Australia in the nearish future could well end up being true, unfortunately. It will be interesting to see what happens with it all.

I gave it 3 stars because it was a pretty good book, but not a great one, at least, not for me. I found it hard work to continue reading it, but I think it was because it was a different kind of book than what I thought it was.

John Dalziel
4.0 out of 5 stars The Warming --- A first reading.
Reviewed in Australia on 12 August 2019
This is one of those, increasingly infrequent, novels that from the opening pages give a resonance that already, to this reader at least, stimulates a feeling of needing, and desiring, to read it a second time.
The publisher's description of what might conveniently be described as the novel's "dystopian themes" is sufficiently concise and clear, that it seems prosaic to describe in further detail the events and characters of what is one of the most surprising and pleasing first novels I have read in some years.
Using a language of simile, metaphor and symbol as a prism through which the reader will find images of possibilities and questions of either despair or hope of a vision of the future, The Warming resists easy definition in its presentation of a world as shifting and elusive as the life forms found in rock pools by the evocatively named Finch.
John Steinbeck once wrote, of one of his own works, that the reader will only take from the book what he brings to it. The Warming has the ability to stimulate empathetic memories that not all readers will respond to, yet is rich in a human commonality that speaks to all.
The fifteen year old Finch can do no more than pretend to understand the Kierkegaard quotation tattooed on the arm of the subject of his adolescent fascination, April. It is only near his end of days, that Finch, now an old man, truly understands, as does the reader perhaps, that those words could have been prophetic self-justification for April, and a guide through the novel and all its small mysteries and ambiguities.
My much younger and more arrogant self would often be irritated and angered if some innocent aquaintence came upon me while I was reading and asked, " what is the book about?"
I would reply, " It is a book by Steinbeck (... or Mailer... Hemingway... Patrick White ... ...)." To me, that is enough to know. And it is everything.
After reading The Warming I am hopeful that after Craig Ensor's second or third novel, I will be able to say, " it is a book by Craig Ensor."
Read more
One person found this helpful
Helpful
Report abuse
See all reviews

Wardie
2.0 out of 5 stars Stretched
Reviewed in the United Kingdom on 6 January 2021
Verified Purchase
Ensor succeeds in conveying a deteriorating world. The way he describes the relentless heat, the brutal dryness, all that works but it's not a compelling story. His characters are weak and the narrative is padded. This story could lose a hundred pages and would become far more compelling and urgent.

What is the plot? The planet gets hotter. Sea levels rise. Populations have to move. While I understand the science, the story wasn't written in a way that allowed me to suspend my beliefs. And this is important in a genre that requires the reader to exist in a made-up world.

The opening lacks tension and the core relationship between the protagonist and his lover never really sparks. Part of the reason why is that we learn key information about the relationship too late in the story. Ensor attempted to portray conflict but left the reader stranded for too many pages. When tension arises, it fades all too quickly and the prose begins to read like a languid summer day where the thermostat pushes into the mid-forties.

Music as a theme didn't work, not because it couldn't, but because the writer refused to allow that potency to enter the plot. Instead, the protagonist is a mimic that never really gets the profession he chooses. Making that choice solely to impress the woman he loves automatically make composition underwhelming for the reader. Why do that? This leads to a story conclusion which is unsatisfying.

That said, all the ingredients for a great story are there. The oedipal relationship between the younger man and the older woman could have been so much more powerful if the hesitancy and lack of specificity in the narration were removed. The best way to achieve this is with brevity, aka, by the relentless exclusion of all unnecessary information. So I can't help wondering what the publishing editor was doing.

Ensor clearly has the skill to write well, and with the right guidance, has the imagination to produce far better work.
Read more
Report abuse
See all reviews
Back to top
Get to Know Us
Make Money with Us
Let Us Help You
And don't forget:
© 1996-2021, Amazon.com, Inc. or its affiliates