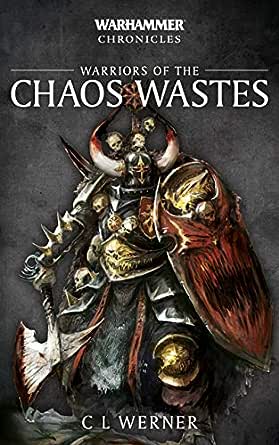 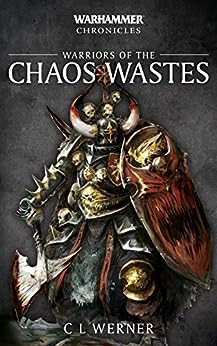 
Many horrors stalk the blasted wastes at the top of the world. Mortals and daemons alike wage war – and in this volume are three tales of such monstrous, god-touched warriors.

These three classic novels exploring the nature of Chaos are from the master of dark fantasy, C L Werner – if you've not experienced them, you owe it to yourself.

The Chaos Wastes are an unspeakable region of magic and madness. In this hellish tundra, the Dark Gods wrestle for supremacy and champions war in their name. Death comes for any who traverse these plains in swift and savage form. Yet there are those who dare brave the wastelands, burdened by their own dark purposes. Wulfrik the Wanderer, cursed by the Ruinous Powers, seeks a prize to appease the forces of Chaos; the Skulltaker, champion of Khorne, hungers for fresh blood; and the last warrior of a Norse tribe sets out to steal the treasure of a god. But in this monstrous arena, there are no winners. Dark forces plot, daemons feed, and even the landscape itself takes sides. This omnibus contains three novels by one of Black Library’s popular authors.

Blood for the Blood God

Palace of the Plague Lord.

Clint is one of Black Library's most beloved fantasy authors, and more recent fans will be anxious to lay their hands on his previously unavailable back list.
C L Werner’s Black Library credits include the Age of Sigmar novel Overlords of the Iron Dragon and novella ‘Scion of the Storm’ in Hammers of Sigmar, the Warhammer novels novel Deathblade, Mathias Thulmann: Witch Hunter, Runefang and Brunner the Bounty Hunter, the Thanquol and Boneripper series and Time of Legends: The Black Plague series. For Warhammer 40,000 he has written the Space Marine Battles novel The Siege of Castellax. Currently living in the American south-west, he continues to write stories of mayhem and madness set in the Warhammer worlds.
click to open popover

J.
4.0 out of 5 stars Arrived in good condition
12 September 2019 - Published on Amazon.com
Verified Purchase
Item arrived on time and in good condition....no complaints.
No explanation necessary, if you are a Warhammer reader.

Read more
Go to Amazon.com to see all 1 reviews 4.0 out of 5 stars
Get FREE delivery with Amazon Prime
Prime members enjoy FREE Delivery and exclusive access to movies, TV shows, music, Kindle e-books, Twitch Prime, and more.
> Get Started
Back to top
Get to Know Us
Make Money with Us
Let Us Help You
And don't forget:
© 1996-2020, Amazon.com, Inc. or its affiliates