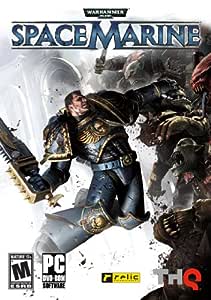 by THQ
Platform : Windows Vista, Windows XP, Windows 7
In stock.
International product from outside Australia
Ships from and sold by Amazon US.

Platform: PC
In the Grim Darkness of the Far Future, There is only War.
Customer Questions & Answers
See questions and answers

Veil_Lord
4.0 out of 5 stars Awesome Game Despite Some Issues
25 June 2012 - Published on Amazon.com
Platform: PCVerified Purchase
when I first saw the preview trailer of this game I was sure I had to have it at some point. I'm heavy into Warhammer 40 K, the videogames and the books, not the tabletop game. My first exposure was the excellent Dawn of war RTS. Since then I've purchased nearly every Warhammer game except Soul Storm, even picking up Fire Warrior. I've also read a couple dozen books.

The first thing you'll notice about Space Marine is that it looks beautiful. The graphics are simply astounding. You'll need a decent graphics card to handle them, but it doesn't have to be a top-of-the-line card. I'm running a GeForce 240, which is at or below the low end of the required video card, and I turned the graphics down just to be safe, but the game seems to run just fine without any slowdown. Though I probably wouldn't try running it with anything less. Not sure if it's because of this, but I have the EVGA GeForce GT 240 512 MB DDR5 model, which is faster memory than the GT 240 DDR3 model available so maybe try the demo.

The story is a bit tired, Ork attack, Space Marines sent into secure the area in front of rescue fleet. You battle a bunch of Orks until you meet the "surprise" twist enemies in the last 3rd of the game. The combat between melee and ranged attacks is practically seamless. I liked combat. It'd be fair to say it can get repetitive, but I had great fun all the way through doing it. Everything looks simply beautiful.

You get to use a chain sword, a combat axe, and the super powerful maul. When using the maul you're limited to the weaker of your projectile weapons as compensation, though really I spent most of the time fighting melee and using my bolter so it really didn't matter except in a few fights from a distance. They also let you use a jump pack on several occasions, which was great fun and allows you some more variety in your attacks.

Now for the problems and there are several. First, the game is short, really short. Start to finish took me a little under 9 hours. There are only 17 true levels and an unplayable 18th epilogue level. I finished it in a couple of days. There's not that much to go back to play again, though I enjoyed it quite a bit and probably will. You can get a good chunk of fun from playing online, if you can get connected to a game, which helps a bit, but you have to pay for extra DLC to play the cool stuff like playing as a Dreadnaught.

The game is a Steam Works game, so you have to have Steam installed. You also can never sell/trade the game since the code is forever tied to your Steam account. Steam terms are also that a game is "rented" for the one time rental fee. Even if you buy the game retail here it's the same thing (you're only buying the code to link it to a Steam account). You don't own the game. They can close your account for most any reason, though in practice they only really do for billing disputes. A tip, do not pay with PayPal or a debit card; if there's an issue and billing gets disputed they can and will lock ALL games on your account. I've never had a problem with Steam though some people hate it. So you've been warned. Also, the DVDs that come with it just install part of the game. You'll still have to download about 2.5 GB from Steam to complete the install. If you're on a bandwidth limit, keep that in mind. Your install will likely take at least a couple of hours even though you have DVDs. Lame.

The last problem, it is VERY glitchy. I was having crashes AT LEAST once a level, however the game has frequent saves and generally it wasn't at the same place, so I didn't mind that much. Eventually, it got annoying so I looked up and if you have BitDefender AntiVirus it may interfere. I cleared out my temp folder, verified my Steam cache, and set an exception in BitDefender AVC to the program file (easy to do, a quick web search can get you instructions). After that, maybe one more crash. However, I still got all kinds of little glitches, like not being able to pick up audio logs, enemies hitting me from too far away, attacks sometimes not working, and really annoying times when I just sort of ran in slow motion despite using dash.

Overall, if you're really into Warhammer 40k, then now that it's dropped in price it's a now brainer. This isn't the end all experience, it's not perfect, and again it's pretty short with not much new replay, but I thoroughly enjoyed it and will replay.
Read more
3 people found this helpful

Frank Castle
5.0 out of 5 stars Makes the Emperor Proud.
9 October 2012 - Published on Amazon.com
Platform: PCVerified Purchase
Basically, this game is graphically beautiful, with an entertaining, simplistic story line. It is full of creative violence, and it's designed with a simple and effective combat system that feels nice. When you chainsaw an orc, you feel the rending flesh and spurting blood.

Just awesome animations too: not every chainsawed orc dies the same way. Lots of blood spurts from bullet wounds, and the orcs all reel under the concussive force of explosions, gunshots, and melee stomps, kicks, etc.

There are just enough weapons to keep killing interesting, just enough melee combinations to keep from getting bored, and just enough AI skill to allow you to play through the levels differently each time.

The word here is "simple." There is no complex open world--just a simple linear quest design done well. There is no complicated combat system--just a fun, brutal bag of choices that are each satisfyingly implemented and displayed. The gameplay is ferocious, but never too difficult. Yes, you can change difficulty to get a harsher experience.

The voice-acting is top notch. It feels pleasantly like participating in a movie.

A lot of detail went into the settings, as simple as they are. Really appreciate that.

Overall, I think this game is a labor of love that reflects the genuine tone of the Warhammer world, and of the Ultramarines specifically.

Multiplayer is a fun romp through interesting and multi-leveled boards and it allows you to steal the loadout of your killers, so if you are a newby you can still have fun trying out a few different weapons you have not unlocked yet.

For the price, you CANNOT AFFORD to miss out on this game. It is not a long game, but it is a solid, well-paced, good old fashioned, violent, science fiction game!! I promise.

Xyooj
3.0 out of 5 stars Decent 3rd person shooter
15 September 2011 - Published on Amazon.com
Platform: PCVerified Purchase
I've never played any of the Warhammer series. Not a big fan of RTS games, but this game is fun; albeit a little repetitive. I think you have to know the Warhammer lore to fully understand the caveat of the setting and story, but it's not hard to comprehend. You are the good guys, Orks are the bad ones.

This review is based on the single-player experience.
Space Marine is a basic 3rd person-shooter with the ability to melee mixed in. You are equipped with a pistol & machine, grenades and are able to switch out two other weapon slots with more powerful weapons (shotgun, sniper rifle, etc). Melee weapons include the chain-sword, battle-axe, and a hammer (you can only use pistol & machine gun with the hammer). The Space Marine is equipped with armor/shield that regenerates and when it depletes you start losing health. The only way to gain health in this game is to perform an execution move using the melee weapons (no health packs). This is my biggest complaint with this game because you continue to take damage will performing the execution and will die if health is too low.

Space Marine also has some on-rail shooting segments and sections were you can you a jet pack. Controls are responsive either with keyboard/mouse combo or a Xbox 360 controller. The game does not have a cover base system so don't expect it to be similar to Gears of War. Co-Op mode is coming soon as a free download. Don't be too concern about the pre-order bonuses. They only offer different weapon re-skins and costumes in the multi-player section. It adds no stat bonuses so you're not missing much.

Technically, the game performs fine on my system (Core i7 930, SLI Geforce 480, 18GB) and has the bare minimum of video customization options available. The game only allows one session, so if someone else wants to play, it will overwrite the current session, which is a bummer. I would recommend you to wait for the price to drop or rent it on one of the game consoles if you are looking for some distractions until the next big game.
Read more
2 people found this helpful
Go to Amazon.com to see all 105 reviews 3.7 out of 5 stars