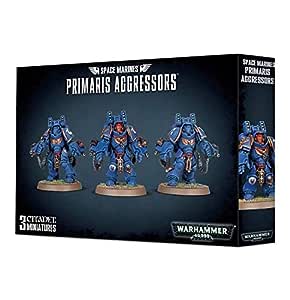 by Games Workshop
4.7 out of 5 stars 31 ratings
Available from these sellers.

Clad in heavy Gravis armour, Aggressor Squads advance on the foe as walking fortresses of ceramite. More mobile than some other Space Marines, theyre better able to negotiate rough ground, making them versatile troops; while they are often employed in specific circumstances or on certain terrain, Aggressor Squads are used as reserves to plug breaches in gun lines or to spearhead an advance. The range of their weaponry is not too long, but when they get close enough to open fire, the result is a sweeping fusillade of large-calibre bolter shells that can shatter enemy charges.

This multi-part plastic kit contains the components necessary to assemble a 3-man Primaris Aggressor Squad. Extremely heavily armoured, their silhouette is wider and chunkier than most Primaris Space Marines, due in no small part to the choice of auto boltstorm gauntlets or flamestorm gauntlets. There are three sets of each, with every weapon featuring pipes or belts that are fed from the enormous backpack. One set of flamestorm gauntlets features retracted barrels, as in close combat fists speak louder than flames Should you choose the boltstorm gauntlets, the Aggressors can also take a fragstorm grenade launcher.

You have the option of assembling 3 Aggressors or 2 Aggressors and a Sergeant; a host of options are available either way. There are 6 heads for the standard Aggressors, with respirators on the mask of those using flamestorm gauntlets, and 2 more specific heads for the Sergeant. The flamestorm-wielding Aggressors have their own shoulder pads, featuring larger blast shielding to protect them from the immense operating temperatures of their weapons. Also included are reliquaries and purity seals, with special examples for Sergeants featuring extra skulls.

The Primaris Aggressors come as 107 components, and are supplied with 3 Citadel 40mm Round bases.

The only issue is the lack of movement and durability otherwise they fill their role very well. They are quite fragile compared to other elites and the squad size really reflects when they are run as a unit of 3. I wouldn't recommend playing them as a 3 man squad because you are seriously hindering the capabilities of the unit. It is almost a shame because GW must know this and the intent is to have people purchase more than one..

I love the models though - one of the most detailed kits I have ever seen and a great centerpiece to the new Primaris armies. I really love the belt fed magazines and the bulkiness of the armor.

You can almost imagine them trudging through the battlefield cleansing anything they touch. It really is a testament to the power the Primaris marines wield in the universe but obviously glorified within the fluff as anything with a little armor is going to shrug these guys off.

They are a great answer to tar pits like Pox Walkers and Boyz but nothing more.

CEC732
5.0 out of 5 stars Good Model
Reviewed in the United States on 5 February 2019
Verified Purchase
Got this for my son. He gave it a thumbs up.
Read more
One person found this helpful
Helpful
Report abuse

Leonel L Lopez
5.0 out of 5 stars Beautiful and Effective
Reviewed in the United States on 4 June 2019
Verified Purchase
They look intimidatingly beefy and do great in battle. i personally built the auto boltsorm guantlets version, and i had a great time doing it and didnt have a hard time putting it together, at all.
Read more
Helpful
Report abuse
Load more international reviews

Johanna C
4.0 out of 5 stars Good
Reviewed in the United States on 28 December 2018
Verified Purchase
Box was a little beat up but nothing was broken inside
Read more
Helpful
Report abuse

Herman Leung
5.0 out of 5 stars You Know What You Getting
Reviewed in the United States on 7 February 2020
Verified Purchase
Oh Warhammer. How my wallet hates thee but hey it’s worth it. Helped with the discount and good unit value. Pleasant surprise it arrived on time.
Read more
Helpful
Report abuse

Heath Adler
5.0 out of 5 stars As advertised.
Reviewed in the United States on 1 August 2019
Verified Purchase
USPS didn't do the box any favors...but contents survived.
Read more
Helpful
Report abuse