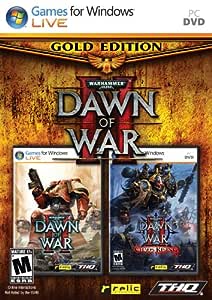 by THQ
Platform : Windows Vista, Windows XP, Windows 7
Only 1 left in stock.
International product from outside Australia
Ships from and sold by Amazon US.

Platform: PC | Edition: Gold
Enter the grim darkness of the far future where there is only war, in this ultimate collection of the acclaimed real time strategy franchise Dawn of War II. Defend the galaxy from the traitorous Chaos Space Marines, ravenous Tyranid swarm, brutal Ork horde, and enigmatic Eldar warhost. Fight for survival over a variety of destructible environments, from the jungles and swamps of Typhon, to the frozen wastelands of Aurelia, and the urban landscapes of Meridian.
Customer Questions & Answers
See questions and answers

Happy Camper
1.0 out of 5 stars Loved Dark Crusade, what happened??
1 January 2016 - Published on Amazon.com
Platform: PCEdition: GoldVerified Purchase
Wasted good money and a lot of time. Put the game in, won't install. Have to have a Steam account. Reactivated account since I don't like Steam and quit using it, have to get a special activation code to use it on a new machine. It's not a new machine, but ok, go to email and get code, Steam account now set up. Still won't load, aux_installer.exe and xlive.dll missing. Looked it up on Steam, tried to add -install e: to Steam icon target line just like they said and every way that made sense, Windows won't accept it as a valid path. Tried to get help from Steam Support, have to have a SUPPORT account different from your Steam account to get support. Set up new account, can't post without logging back into regular Steam account too. Logged in, need another special code to use a new browser, (same one I used the first time) only to find there is nowhere to post for actual support from Steam personnel. You can only get help from the community.?? Without much hope I posted my problem. (Checked back 3 hours later and there is still no answer) Can't imagine why I don't like Steam.
Went looking on my own and eventually found the files on Microsoft's website. Had to download and join Games for Windows Live to get them. More than 3000 people have posted this problem. Why aren't the files on the installation DVD?? FINALLY got the game to load. Had put in different CD keys given to me by Steam for both games.
After 4 hours the game started with no sound and an invisible mouse courser. Messed with it and got the sound working but still cannot see the courser. It makes navigating the menus extremely difficult and game play impossible. How can a Windows game be this hard to run on a Windows system?
After considerable frustration, wasting all that time installing it and the money for the game, it is not playable.
Read more

JGar
2.0 out of 5 stars For the Gamerscore
9 January 2012 - Published on Amazon.com
Platform: PCEdition: GoldVerified Purchase
I'll preface this review by stating that I am *somewhat* of a 40K fan; I like the background a good bit, I own some miniatures, and I play the wargame on occasion. I didn't own the original Dawn of War, though I played the demo.

I'll be honest; I was attracted to this game due to the fact that it was a Games for Windows Live game, which would allow me to add to my Xbox Live Gamerscore when away from my Xbox 360. I understand that the GFWL feature was a turn off for many, but for me, it was a major bonus. Coupled with the fact that it was an RTS in a franchise I was familiar with, I figured I had to give it a go. After trying the demo, I was rather surprised that this was labeled as an RTS, when it turned out to be sort of RTS-RPG combo; there was no base or structure building, or mass spawn of units--rather, you, as the player, control a squad or group of squads with a specific mission to accomplish. Your units and heroes can level up and gain skills that have to be micromanaged in combat to be exercised efficiently. It was kind of like playing the tabletop game in real-time. I didn't care for it too much, but, due to the fact that it had achievements, I resolved that, if I found it for a very low price, I'd go ahead and get it. I eventually purchased it, but I wish I hadn't now. I never play it, and there is no compulsion or desire to do so. The campaign is not inspiring, and is not laid out in a way that encourages the player to advance the storyline or play exciting new missions. There's plenty to do in DoWII, but the game does a horrible job in inspiring me to do it. The multiplayer mode is more similar to traditional RTS games, but is no-where near the level of the original DoW. If the campaign can be considered skirmish level in the grand scheme of real-time strategy, then the multiplayer mode in DoWII and Chaos Rising still fails to provide anything that can be seen as larger than a small battle. This, I think, is the great irony--a 40K video game should ideally focus on allowing you to control the huge armies you never could on the tabletop, or put you in the shoes of a single soldier, in a way that couldn't be replicated by the wargame. Unlike DoW and Space Marine, DoWII does neither. And in that regard, Squad Command is a much better tabletop simulator than DoWII. DoWII has a decent amount of redeeming qualities, but before earning a single achievement, the reason I bought the game, I decided that the game was not fun enough to warrant spending any time on (actually playing through the game requires a decent time commitment). DoWII Gold deserves a 2/5 based on my experience.

Dawn of War II is a decent reflection of the tabletop wargame Warhammer 40,000 in real-time, but as an RTS, it falls quite short. It would feel more at home with the label "real time tactics," and tactically managing each of your units quickly gets tedious. The multiplayer mode is a scale up from the campaign missions, but is not particularly enthralling. I'm glad THQ decided to try something new with the sequel, at least for originality, but it's hard to be receptive to this game. For people familiar with Gamerscore, GFWL will be a welcome addition; otherwise, it will be an uncomfortable intrusion. I'd recommend trying the demo. There's one on Steam, and one on Games for Windows Live (one didn't work for me). If you don't really like the game after playing the demo, don't do what I did and buy the game anyway! I'm such a dummy.
Read more

Rob
3.0 out of 5 stars Not the same as the first...
20 November 2012 - Published on Amazon.com
Platform: PCEdition: GoldVerified Purchase
In general, this game is pretty kickass (after I finally found out how to play Skirmish against bots). What I really dislike about this game is 1., it needs to be registered through Steam and 2., you need to be logged into Games for Windows Live to do ANYTHING. So, if you planned on playing this offline, good luck, because you aren't. This really hurts a consumer like me who's been living off of Sprint's hotspot for the past year and I really hate using data just to log into Steam and have to sit for a few minutes just for it to log into Games for Windows Live... All of this just to play against bots...

However, if you have the internet capability and buying it to play it online, more power to you.
Read more
One person found this helpful

thy_avatar
4.0 out of 5 stars Be aware of what you're actually getting
6 August 2010 - Published on Amazon.com
Platform: PCEdition: GoldVerified Purchase
Please be aware of what you are actually getting when you buy this. You are not actually buying an installable copy of the game, you are in fact buying an installation disk for an older version of DirectX and an older version of Valve's 'Steam' software. Included with this is an unlock code so that you can go on the Steam software and then download the actual game, this is the only way to get the actual game (legally). If I wanted to get the game this way I could have just gone onto Steam and purchased it through there, I wanted the game on a disk so I wouldn't have to download it. It took 3 days of straight downloading over a DSL connection to get the game. Valve's download servers are sslllloooooowwww!!!
I am very disappointed in this digital/download only method of getting the game, and in the load time of the game (which has been getting worse with each game in the Dawn of War series). However I like the gameplay and have liked the series since the very first one came out. I have not tried the multiplayer in this game, but I expect it should be the same fun as the other games in the series.
Read more
6 people found this helpful

Brian Zimmerman
3.0 out of 5 stars Looks great but won't install on Win8
12 May 2014 - Published on Amazon.com
Platform: PCEdition: GoldVerified Purchase
The price is low since this game is old, it looks great from the videos I have seen and it is on many people's greatest games of all time lists, but for some reason I am unable to install it with Windows 8.1. I have yet to search for the solution, there is probably some kind of Win7 mode I can use or some .dll file out there I can drop in place to make it all go, but straight out of the box it will not work on Win8.
Read more
One person found this helpful
Go to Amazon.com to see all 87 reviews 3.1 out of 5 stars