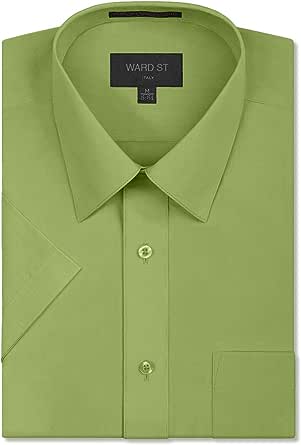 Save up to 40%
on select clothing, shoes and accessories. Restrictions apply. Shop now
Share

Matt
5.0 out of 5 stars Great shirt - just double check sizing
Reviewed in Australia on 18 March 2020
Size: L / 16-16.5 NeckColour: NavycharcoalVerified Purchase
Bought these as summer work shirts. I'm a 42 in long sleeve shirts, and the XL is a little too large, but the L sized shirt was a better fit. Material thickness is what you would expect from a business shirt, ie not the thick cotton used in most casual short sleeved shirts, and not flimsy either. Shirt was easy to iron, and pretty comfy. Would recommend and purchase again.
Read more
Helpful
Comment Report abuse
See all reviews from Australia

Laouise
3.0 out of 5 stars BUYER BEWARE
Reviewed in Canada on 20 May 2019
Verified Purchase
The deal on these sheets are not as good as advertized. Canadians, we have to pay $35.50 Customs fees for 4 shirts.
Read more
Helpful
Sending feedback...
Thank you for your feedback.
Sorry, we failed to record your vote. Please try again
Report abuse

Dani
5.0 out of 5 stars Excellent Shirts!!!!!
Reviewed in Canada on 11 August 2018
Verified Purchase
Very pleased with these shirts. Size was perfect,color was as vibrant and exact as shown on the web site. These were shipped from CA to Canada
in record time.The quality of the workmanship was excellent. Will be purchasing more of these shirts.

rowland h cuthbert
4.0 out of 5 stars and it fits great!
Reviewed in Canada on 23 August 2018
Verified Purchase
Originally ordered and received my size 161/2. had to send it back because it was narrow across the shoulders and snug across the chest. I re-ordered a 17- 171/2. and it fits great!
Read more
Helpful
Sending feedback...
Thank you for your feedback.
Sorry, we failed to record your vote. Please try again
Report abuse

Eren faptastique
4.0 out of 5 stars Oof
Reviewed in Canada on 7 December 2018
Verified Purchase
Its not the best quality but good for the price. The fact that it’s sleeveless is not very useful and quite honestly looks pretty bad but once again for the price, I guess it’s understandable
Read more
Helpful
Sending feedback...
Thank you for your feedback.
Sorry, we failed to record your vote. Please try again
Report abuse
Load more international reviews

Amazon Customer
5.0 out of 5 stars Five Stars
Reviewed in Canada on 3 June 2018
Verified Purchase
Great quality and perfect fit. What more can I say?
Read more
Helpful
Sending feedback...
Thank you for your feedback.
Sorry, we failed to record your vote. Please try again
Report abuse

lee p.
4.0 out of 5 stars very happy
Reviewed in Canada on 22 March 2019
Verified Purchase
so far fit is great colors are what I expected have yet to wash so do not know how that will turn out; but as it stands now very satisfied
Read more
Helpful
Sending feedback...
Thank you for your feedback.
Sorry, we failed to record your vote. Please try again
Report abuse

lyttlelady
5.0 out of 5 stars Five Stars
Reviewed in Canada on 1 August 2018
Verified Purchase
My husband was quite pleased with the shirt.
Read more
Helpful
Sending feedback...
Thank you for your feedback.
Sorry, we failed to record your vote. Please try again
Report abuse

RnD Hahn
3.0 out of 5 stars You actually get an Omega (even labeled as Omega)
Reviewed in the United States on 10 February 2018
Verified Purchase
It is an OMEGA (labeled) shirt. Not a Ward St! The color was not the shade of green advertised for a Ward St, it was Omega's turquoise. So if color matters, Beware! Size runs just a bit small, but I anticipated that and ordered 2 sizes bigger than I normally wear, so this fits comfortably (just have to ignore the size label). Overall the Omega quality appears to be OK, and short sleeve dress shirts in big sizes are hard to find, so I will keep it. But I will look at the Omega color selections to know what I will actually be receiving. Bottom line, if you can look past the false advertising, buy a size larger than you think you wear, and check the Omega color options, then you will be reasonably happy with this shirt.
Read more
17 people found this helpful
Helpful
Sending feedback...
Thank you for your feedback.
Sorry, we failed to record your vote. Please try again
Report abuse

Shilo
4.0 out of 5 stars Nice shirts with a bit of mystery...
Reviewed in the United States on 28 May 2018
Verified Purchase
My go-to for men's dress shirts is Costco's Kirkland brand, but Kirkland doesn't sell solid color short sleeved dress shirts, and it's nearly impossible to find anywhere here in the southern California desert that sells them, so I came to Amazon. I'm 195# and usually wear an extra-large dress shirt but just to be sure, I initially bought one Large and two X-Large shirts from this Ward St seller to see which size fit me best. As expected, the Large is too tight to wear, other than standing (e.g., a wedding or cocktail party) but the X-Large fit me beautifully. I ordered 6 more (for a total of 9), all X-Large. First, let me say. I love these shirts. I tend toward bright, vivid colors and these shirts don't disappoint. They appear well-made, including the standard placket, that strip of material that runs down the front of the shirt behind the buttons. (Some other dress shirts have a 'French' placket, meaning they don't have that seemingly separate strip of material behind the buttons, but I prefer the standard placket, it seems to give the front of the shirt a more dressy and substantial feeling.) I've washed and ironed the shirts and they launder and iron well, and look quite sharp.

Oddly, though I ordered all the shirts in just two orders (the first order for 3, and the second order for 6 more, each a different color), the shirts were received over 5-6 different packages , most on different days. The return labels on all the packages said Ward St, but not all the same addresses (I received the final two packages today, each with one shirt: the first was from Ward St in North Las Vegas, and the second was from Ward St in Lexington, Kentucky. Weird? Yes. Problematic? No. Also odd: as noted by several other reviewers, the website calls these 'Ward St Men's Short Sleeve Dress Shirts', but the label and the packaging on every one of mine says 'Omega - Italy'. What IS strange: the actual manufacturing and care label sewn into the neck of each shirt clearly says 'Made in China' (see photo). If not false advertising, at least confusing; last I knew, Italy was NOT in China. Oh, P.S. All the shirts came in original factory-sealed packaging with the requisite cardboard, tissue, pins and clips, but the one received today from Las Vegas was just a loose shirt inside a mailing bag, with no packaging, pins, clips or anything else; clearly a return. It didn't look like it had been worn and was undamaged, so I'm keeping it (it's the Coral colored one in the photo). So far, at least, I can honestly recommend these shirts. If they wear badly, I'll update this review.
Read more