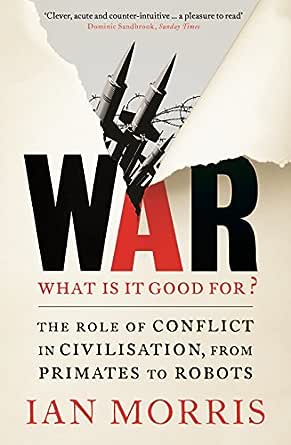 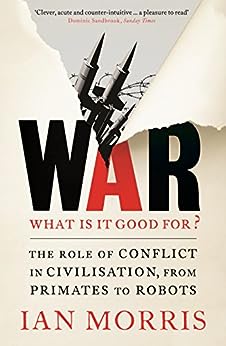 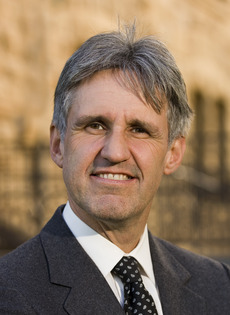 War: What is it good for?: The role of conflict in civilisation, from primates to robots

Morris is the world's most talented ancient historian -- Niall Ferguson This is an astonishing book, full of controversy, brilliantly researched and thoughtfully argued ... one of the most fascinating and thought-provoking histories I've read in years. * Daily Telegraph * A provocative and extraordinary contribution to wide-screen comparative history ... a true banquet of ideas. -- Boyd Tonkin * Independent * He is a much wittier and more self-deprecating writer than most of his competitors, has a sharper eye for facts and anecdote, and steers well clear of the preening bombast that so often disfigures such tracts. Clever, acute and counterintuitive, his book is a pleasure to read, and though his argument may be depressing, it seems pretty persuasive. -- Dominic Sandbrook * Sunday Times * Ian Morris' evidence that war has benefited our species-albeit inadvertently-is provocative, compelling, and fearless. This book is equally horrific and inspiring, detailed and sweeping, light-hearted and deadly serious. For those who think war has been a universal disaster it will change the way they think about the course of history. -- Richard Wrangham * Demonic Males: Apes and the Origins of Human Violence, Catching Fire: How Cooking Made Us Human * Perhaps you think that you already know everything about the history of all peoples on all the continents for the last 15,000 years. Even if you do, you'll still get a fresh perspective from this thought-provoking book. With this volume and his previous Why the West Rules-for Now, Ian Morris has established himself as a leader in making big history interesting and understandable. -- Jared Diamond * Guns, Germs, and Steel: The Fates of Human Societies, Collapse: How Societies Choose to Fail or Succeed * That war is the antithesis of everything we cherish in our modern civilization is that one rare idea nobody would dare disagree with in polite company. Nobody except Ian Morris that is. This delightful, erudite and thought-provoking book challenges some of our core beliefs. Morris argues, fairly convincingly, that far from being its antithesis, war is the mainspring of our civilization, and we are far from the last chapter of the history that war has made. You will be surprised, informed, entertained and most importantly challenged by this book. -- Daron Acemoglu, coauthor of Why Nations Fail: The Origins of Power, Prosperity, and Poverty We now live in a far safer, healthier, and more prosperous world than any of our ancestors ever did. Ian Morris has drawn upon a breathtaking array of data from paleography, anthropology, history, psychology, and political science to demonstrate the unpalatable but inescapable truth that we do so thanks to what has for centuries been seen as mankind's greatest scourge: war. Written with all of Morris' habitual narrative flair, this brilliant book will surely change forever the way we think about human conflict and what we should attempt to do about it in the future. -- Anthony Pagden * Worlds at War: The 2,500-Year Struggle Between East and Wes * Big thinker Morris (Why the West Rules-for Now) returns with an ambitious, epoch-spanning study of violence writ large across time and place ... By surveying germane, timely issues from containment to ICBMs and "doomsday devices," as well as speculating on the potentials of the transhuman and posthuman, Morris casts a wide net ... A fascinating and stimulating work sure to compel readers of anthropology, archaeology, history, and futurity. * Publishers Weekly * A profoundly uncomfortable but provocative argument that "productive war" promotes greater safety, a decrease in violence and economic growth ... A disturbing, transformative text that veers towards essential reading * Kirkus Reviews (starred review) * An ambitious, epoch-spanning study of violence writ large across time and place ... A fascinating and stimulating work sure to compel readers of anthropology, archaeology, history, and futurity. * Publishers Weekly * Praise for Why the West Rules - For Now: 'A great work of synthesis and argument, drawing together an awesome range of materials and authorities -- Andrew Marr One doffs one's hat to Morris's breadth, ambition and erudition * Sunday Times * An astonishing work -- David S. Landes, author of The Wealth and Poverty of Nations Brilliantly argued across a huge sweep, combining history with human geography, human and natural sciences. It is a magnificent and stimulating read, and should be given to anyone involved in the business of war and peace, or the human fate in any respect - and already a book of the year. -- Robert Fox * Evening Standard * An exuberant and wonderfully entertaining tour de force of history, archaeology, anthropology, geography, evolutionary biology and technological and military speculation... a terrific book. -- David Crane * The Spectator * the author is an unabashed pop writer, using humour and anecdote to lively effect. The result is a mammoth work of scholarship, written in an entertainingly accessible style... If we think we can understand history, this admirably provocative book makes us think again. -- Andrew Anthony * Mail on Sunday * Morris has a lively writing style and enjoys provoking his readers. -- Sir Lawrence Freedman * Financial Times * It is the book's elegantly succinct prose that will most captivate readers. it is a book filled with lucid explanations of the most recondite questions, with many revealing quotations and witty asides. -- Edward Luttwak * Prospect * One of the most thought-provoking volumes you're likely to read this year. * Geographical * In this remarkable book, historian Morris argues not only that war is a source of technological advance but that it brings peace... the thesis is disturbingly persuasive. -- Martin Wolf * Financial Times * --This text refers to an out of print or unavailable edition of this title.

Ian Morris is Willard Professor of Classics, Professor of History and a fellow of the Archaeology Centre at Stanford University. He is the bestselling author of Why the West Rules - For Now and has appeared on a number of television networks, including the History Network and PBS. --This text refers to an out of print or unavailable edition of this title.

Cecilia M. Pattison-Levi
5.0 out of 5 stars Fantastic book - essential for understanding the paradoxes of war
Reviewed in Australia on 14 July 2014
Verified Purchase
This was a great book. Really enjoyed reading it. Great information on the complexities of warfare. I highly recommended this text to anyone interested in warfare and its impact.
Read more
Helpful
Report abuse
See all reviews

Roger Backhouse
5.0 out of 5 stars The Purpose of War?
Reviewed in the United Kingdom on 30 May 2014
Verified Purchase
Ian Morris is a remarkable polyglot who is very persuasive about the importance of war in human development. He draws upon a vast expanse of knowledge and reading coupled with profound thinking about what war has contributed to progress with its range of compulsions for victory and conquest. We learn about the value of not only single inventions but the profound changes which war has wrought over five thousand years. Has mankind now reached the logical conclusion that war is over because our capacity to destroy has finally exceeded our capacity to innovate through the experience of war. We must remember that the considerable changes achieved by the invention of the internet and its many significant ramifications arose from military research. Does such research still have resonance for human progress. The answer must be Watch This Space for the next five thousand years. A very valuable and important contribution to our knowledge of ourselves.
Read more
One person found this helpful
Report abuse

Gazza
4.0 out of 5 stars Enjoyed
Reviewed in the United Kingdom on 27 February 2018
Verified Purchase
Like Morris' other book (Why the West Rules~For Now) this book is very well written and I enjoyed reading it.
Read more
One person found this helpful
Report abuse

C. D. Fraser-fleming
5.0 out of 5 stars Excellent
Reviewed in the United Kingdom on 27 November 2016
Verified Purchase
Excellent analysis of future conflict resolution. I hope the outcome is correct, if for some reason it wrong, the price will be very high indeed
Read more
Report abuse

Ken Padmore
5.0 out of 5 stars War: What is it good for?
Reviewed in the United Kingdom on 5 September 2014
Verified Purchase
Incredibly thought provoking. Broad sweep from the start of civilisation to potential futures. Especially resonant for the present situation in Ukraine.
Read more
One person found this helpful
Report abuse

Robert Davies
5.0 out of 5 stars Five Stars
Reviewed in the United Kingdom on 16 September 2014
Verified Purchase
Fascinating and counter-intuitive
Read more
Report abuse
See all reviews
Get FREE delivery with Amazon Prime
Prime members enjoy FREE Delivery and exclusive access to movies, TV shows, music, Kindle e-books, Twitch Prime, and more.
> Get Started
Back to top
Get to Know Us
Make Money with Us
Let Us Help You
And don't forget:
© 1996-2020, Amazon.com, Inc. or its affiliates