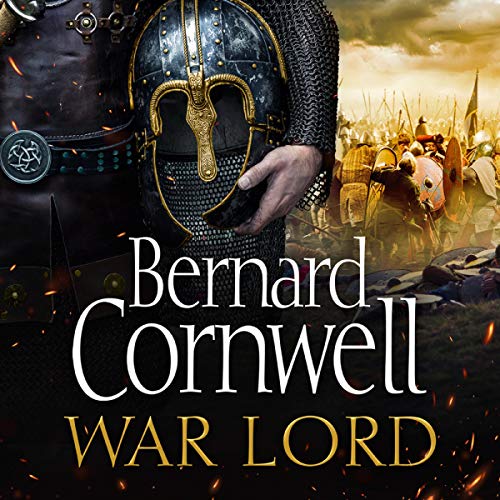 4.8 out of 5 stars
4.8 out of 5
9,840 global ratings
How are ratings calculated?
To calculate the overall star rating and percentage breakdown by star, we don’t use a simple average. Instead, our system considers things like how recent a review is and if the reviewer bought the item on Amazon. It also analyses reviews to verify trustworthiness.

Howard Riach
5.0 out of 5 stars A journey one never forgets
Reviewed in Australia on 24 October 2020
Verified Purchase
I am saddened to read the final novel. But then again Uhtred would never live forever. Bernard has sculptured a wonderful series which relates the history with fiction. With strong characters aligned with wit, empathy , gore and the realities of the aftermath of wars.
I am a lifetime admirer of his writings ever since the original Sharpes series many years ago.
If you have only just picked this book and not read the series I strongly suggest you do. An eloquent author and one I simply admire.
Read more
One person found this helpful
Helpful
Report abuse

Graham Whiteley
5.0 out of 5 stars One man's fight in the creation of E nngland
Reviewed in Australia on 20 October 2020
Verified Purchase
And so we end how we started with Uhtred ending the story of the creation of the country of England.
Having followed these books from the start it has taught me a great deal of how my home country came to be something that is never taught in an English class room.This series could could have gone on and I for one would have gone on with it that's how good I thought it was, but as they say all good things must come to an end and I applaud Bernard Cornwell for the series and how he wanted to finish it.
I look forward to his next work hopeful that it can be as good as this bravo sir.
Read more
One person found this helpful
Helpful
Report abuse

david
5.0 out of 5 stars Ripping yarn.
Reviewed in Australia on 19 November 2020
Verified Purchase
Bernard Cornwell has not lost his touch, although I am going to miss Lord U. This tale, the last in the series is an excellent example of Bernard's ability to weave a story around history in England during Saxon times; a period of history much over looked.
I have no hesitation in recommending this book to anyone who enjoys a ripping yarn based on history.
Read more
One person found this helpful
Helpful
Report abuse

Chris Limb
5.0 out of 5 stars How England came to be
Reviewed in Australia on 12 November 2020
Verified Purchase
Bernard Cornwell is a past master at illuminating history. He is highly entertaining and meticulous at tracing the events that led to the England we take for granted. In this and other novels he leaves strong memories of the kinds of people and conflicts, and the importance of individuals in our social evolution.
Read more
Helpful
Report abuse

John
5.0 out of 5 stars One of his best novels
Reviewed in Australia on 20 October 2020
Verified Purchase
I've read just about all Bernard Cornwell's novel's, and this one would be one of his best! When is the next one tp be published?
Read more
Helpful
Report abuse

Steve Macpherson
5.0 out of 5 stars “Wyrd bið ful āræd. Fate is inexorable.”
Reviewed in Australia on 25 November 2020
Verified Purchase
The Lord Utred has defended his oaths the length and breadth of what is becoming Englaland. This final tale of Utred by the world’s finest historic novelist Bernard Cornwell does not disappoint. Read them in order, you won’t be sorry.
Read more
Helpful
Report abuse

Mr. A. J. Ralston
5.0 out of 5 stars Great read
Reviewed in Australia on 5 November 2020
Verified Purchase
Well written which is what I have come to expect from this author. Couldn't put the book down and would have given it 6 stars if I could have. Pity the T.V., series doesn't follow the books more closely though.
Read more
Helpful
Report abuse

Jerry R.
4.0 out of 5 stars War Lord, another ripping yarn from Bernard Cornwell in the Uthred saga.
Reviewed in Australia on 23 November 2020
Verified Purchase
Enjoyed this latest book as much as all its predecessors. The series covers an interesting part of english history, the characters and action is well developed. Becoming a little predictable, but still a great page turner!
Read more
Helpful
Report abuse
See all reviews

hammarbytp
5.0 out of 5 stars Wyrd bið ful āræd
Reviewed in the United Kingdom on 18 October 2020
Verified Purchase
As virtually anyone in the UK about what happened in 1066, and they will tell you about battle of Hastings, William the conqueror, and Harald with an arrow in his eye. Ask the same question about 937 AD and the battle of Brunanburgh, and few would be able to provide any information. Nor would they be able to give any details of King Athlestan, his father King Edward, and apart from the inability to bake cakes, nor could they answer much about King Alfred

Which in some ways extraordinary since without these characters and that battle, there would of been no England for William and Harald to fight over. This then is culmination of the story of Uthred, a warrior whose arc joins these historical characters together and bring to life the extraordinary events that fought off a viking invasion and in doing so joined the Saxon kingdoms into one called England.

As usual, Bernard Cornwell does a fantastic job of bringing an era, which has little in the way of literary evidence to life. In doing so he provides a great insight into not only an important part of a forgotten history, but into a way of life. He himself will admit that in places historical accuracy has to take a back seat to the story, but generally reading these books you will get not only a fantastic adventure story, but a history education. If only mainstream history books were as entertaining.

The story itself is set with Uthred as lord of Bebbenburg (Modern day Bamburgh) , caught between 3 great powers. King Athelstan, who is slowly strengthening his grip his grip on England, Constantine of Scotland who ambitions were South and the desire to curb Athelstan's power, and the Olaf Guthfrithson, a nordic warlord from Ireland. The story revolves about his desire to maintain his kingdom, and in doing so leads us to the events that led to one of England's defining battles, Brunanburgh. In truth, it was clear some books back that this would be the final destination, but how the story would end up at this point has been fascinating. As the books says “Wyrd bið ful āræd". Fate is inexorable.”

We also get reintroduced to some of the characters from the previous book. Steapa, Alfred's ferocious champion, King Hywell of Wales and Uthred's estranged elder son, who joined the priesthood, rather than become a warrior.

As usual the battle itself is wonderfully described defining the terror and viciousness of fighting at this time, with men lined ins shield wall in which close quarter battle is held.

Being the last book of the series, this not maybe the one to start with, relying a lot on knowledge of what has gone before, but I can not recommend the books highly enough. If nothing else, it has given me a greater understanding of Saxon History and how we came to be.
Read more
80 people found this helpful
Report abuse

Doyouthinkhesaurus
5.0 out of 5 stars A satisfying conclusion
Reviewed in the United Kingdom on 16 October 2020
Verified Purchase
Look, if you're reading the 13th book in a series you already know if you like this stuff or you don't. The usual crowd are here, the usual ploys and clever tactical decisions are here, the shield walls are here, and Uhtred is here.

That's it. That's all you need to know. It's as good as anything else in the series and Cornwell sticks the landing. Now go read it.

And if you haven't read the preceding dozen books, but think it might be your sort of thing, go and start at the beginning. You'll thank me for it.
Read more
60 people found this helpful
Report abuse

A. J. McGuire
3.0 out of 5 stars Question to Amazon customer service
Reviewed in the United Kingdom on 16 October 2020
Verified Purchase
Which I can't find any means of contacting, at least if I want to speak to a live person.

I pre-ordered this book in early September after being sent an email from Amazon informing me of its forthcoming publication. The selling point for me was the following text (which is still included in the item description):

The book I received today, the day of release (with the number 1 in the indicia, indicating first printing) is simply the standard edition. I doubt any Amazon employee will read this, but all I can say to anyone expecting to receive the edition advertised is: you'll be lucky.

I can't return the book because you need to print the label. Lacking a device capable of receiving this I see no option but to keep it, and my only apparent means of informing Amazon of the issue - at least notionally - is to post his review of a book I haven't read. They don't make things easy, do they?
Read more
42 people found this helpful
Report abuse

Mark I. Grant
5.0 out of 5 stars The making of England
Reviewed in the United Kingdom on 21 October 2020
Verified Purchase
As you would expect from probably one of the best historical novelists writing a visceral tale which concludes our hero Uhtred's saga. And what a saga it has been.
I have loved this series. Thank you for many hours of pleasure in their reading. Thank you for the knowledge of Anglo Saxon Britain. Thank you for the recommendation of Michael Livingstone's book on this battle ( a great and informative read). Thank you for a great tv series.
I will miss Uhtred and his band of warriors but look forward to further tales and perhaps a new hero with a saga to be told.
Read more
26 people found this helpful
Report abuse

Steve P
5.0 out of 5 stars The End Of An Era
Reviewed in the United Kingdom on 20 October 2020
Verified Purchase
I read this in two sittings and the final tale did not disappoint. The story line galloping to a crescendo that left Uhtred on the winning side.

I am so happy that I did not read of Uhtred or Finnan’s death in this last instalment. I guess it would have been easy to kill them off at the end but they both deserved better than that.

Thank you for your story telling Bernard I have enjoyed the ride.
Read more
23 people found this helpful
Report abuse
See all reviews
Back to top
Get to Know Us
Make Money with Us
Let Us Help You
And don't forget:
© 1996-2021, Amazon.com, Inc. or its affiliates