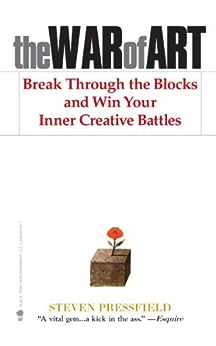 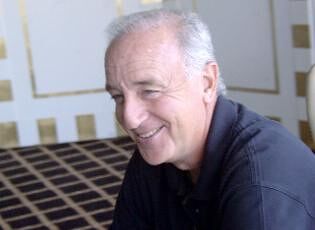 The War of Art Kindle Edition

Finished copies have arrived and have been mailed from the warehouse. --This text refers to an alternate kindle_edition edition.

Steven Pressfield is the author of international bestsellers THE LEGEND OF BAGGER VANCE, GATES OF FIRE, TIDES OF WAR and LAST OF THE AMAZONS. He lives in Los Angeles. --This text refers to an alternate kindle_edition edition.

4.5 out of 5 stars
4.5 out of 5
9,488 global ratings
How are ratings calculated?
To calculate the overall star rating and percentage breakdown by star, we don’t use a simple average. Instead, our system considers things like how recent a review is and if the reviewer bought the item on Amazon. It also analyses reviews to verify trustworthiness.

Roberto Ortuso
5.0 out of 5 stars And let the unlit match under my arse be sparked!
Reviewed in Australia on 20 October 2020
Verified Purchase
This is it. The validating, guiding light through the hazy, insecure chaos that infects every creative’s life and writing process. It translates into all walks of life, with its message of persisting through and DOING the work. Personifying resistance as this benevolent force that keeps us down and how we can fight it with no nonsense excuses and staving off the urge to prematurely quit.
Read more
One person found this helpful
Helpful
Report abuse

barbara gorman
4.0 out of 5 stars A surprisingly good little book
Reviewed in Australia on 24 February 2021
Verified Purchase
I can feel the pressure to perform and produce quality, imaginative work pretty hard sometimes. This small, easy book talks about resistance and the higher creative self in ways I could relate to and appreciate. Really good!
Read more
Helpful
Report abuse

Sprocket
5.0 out of 5 stars Wise Counsel
Reviewed in Australia on 8 March 2015
Verified Purchase
There is a writer named Steven Pressfield - well, yes, that's true. What he is hiding though is a deep skill - a superpower, if you like. He is a wise counsel, a deep thinker, a reflective soul, a philosopher.
Read his books they will change you in the very best of ways - oh, and they will make you see your craft of writing in proper grown-up ways. If you are a writer you will discover the writer that you can be. You will discover you.

S G Wightman
5.0 out of 5 stars Deeply Inspiring
Reviewed in Australia on 26 November 2018
Verified Purchase
I gave this book a 5 star rating because it spoke to me on an incredibly deep level. I have always had creative tendencies that have lain dormant for most of my life and nothing I have ever encountered has inspired me to excercise my creative tendencies more than this book. Thank you from the bottom of my heart Mr Pressfield.
Read more
2 people found this helpful
Helpful
Report abuse

Juni Desireé
4.0 out of 5 stars The freedom, call and motivation to write
Reviewed in Australia on 2 May 2015
Verified Purchase
My summary: This book is about becoming who you are meant to be and doing what you are meant to do. It’s divided into three parts. The first part looks at Resistance: the thing that stops us from doing what we’re meant to do and can be summed up by one word, fear. The second part looks at how to combat Resistance: by Turning Pro and doing our work. The third part looks at the Muse: the opposite of Resistance.
It was a quick and easy read that was packed full of great advice and insights that have helped me in my writing journey. Pressfield doesn’t mess about; he can be blunt and straightforward, giving me the slap I needed to get to work.

What I got out of it as a writer: So much! The biggest thing: to just do the work of sitting down and writing.
Some other things: to not fear failure and to fail, because it means you’ve done something; to give the work my best, and then let it go, knowing my job is to work but I’m not my work; to not worry about how people will respond to my work, because as long as I know I gave it my best, I’ll always be okay with it; to write because it’s in me to write and that’s all I have to do. It gives me courage to write, to do the work of giving it my best, and to let my writing be seen.
It’s entirely valuable to me, a must-read, but not necessarily one I enjoyed reading. I looked forward to reading it for the practical tips I could get out of it but not to get lost in the writing.

Mrs. Ann E. Russell
5.0 out of 5 stars Book to help creatives to refocus.
Reviewed in Australia on 10 October 2019
Verified Purchase
A well written book, easy to read, and very helpful to creatives who need to refocus and find ways around procrastination. Probably not as helpful as books in the same vein by Julia Cameron, but still a good read and some fresh perspectives nonetheless.
Read more
Helpful
Report abuse

Stephen Merrett
5.0 out of 5 stars Some very valid interesting points
Reviewed in Australia on 20 April 2019
Verified Purchase
The author’s very wise words in moving towards the resistance is awe inspiring. Highly recommend for anyone who is fearful
Read more
Helpful
Report abuse

Jordan Morpeth
5.0 out of 5 stars Every artists needs to read this book!
Reviewed in Australia on 3 April 2021
Verified Purchase
This book is about the professional. The one who wants to make art for a living but also the artist who had a message to give. The War Of Art is the best book on the marker for creatives and their mindsets.
Read more
Helpful
Report abuse
See all reviews

Roisin
1.0 out of 5 stars Waste of money and time. Don't be fooled by the 5 star reviews...
Reviewed in the United Kingdom on 12 August 2018
Verified Purchase
Would give zero stars if I could. A narrow minded author that makes alot of RIDICULOUS claims without anything to back it up. Actually angered me. A wishy washy badly constructed book that preaches about religious views throughout and makes extremley irrational claims that certain mental health disorders have been made up by marketing companies etc.
Read more
122 people found this helpful
Report abuse

Peter James West
3.0 out of 5 stars A strange, rambling monologue with moments of clarity
Reviewed in the United Kingdom on 27 March 2019
Verified Purchase
I picked up this book because it was recommended by David Farland. I see now it was more to his taste than mine.
Clearly Steven has read widely across cultures, subject matter and literature. Clearly he has a talent for writing. But as a non-fiction work, I think this was poorly targeted.

It srarts with a kick-ass be a professional, not an amateur section - which I entirely agree with and enjoyed.

It then descends into a religious and philosophical rant that had little meaning or relevance to me.

Maybe if the blurb had made it clearer who it was targeted at, i.e. religious writers, seeking answers as to where they get their talent, then I wouldn't have picked it up.

Clearly the right target audience find it inspiring. The blurb didn't make it clear that I'm not part of it.
Read more
47 people found this helpful
Report abuse

Mikeyboy
1.0 out of 5 stars Don't believe the hype
Reviewed in the United Kingdom on 26 June 2019
Verified Purchase
Once again I've been duped by a 'self-help' book with a great reputation. I didn't get much out of it at all, and that was before the last third of the book which descends into religious/spiritual waffle. It is of absolutely no practical value, keep your money and don't waste your time reading it.
Read more
39 people found this helpful
Report abuse

Rajaboina
5.0 out of 5 stars Just keep all the Self-help, Strategy books aside and READ this.
Reviewed in India on 28 June 2016
Verified Purchase
I know you wanna change. You wanna improve your self. You read all the classics in the self-help niche, all the success stories of the greatest personalities, and learn all the strategies.
And you feel that HIGH once a book is finished, eager and enthusiastic to apply all the knowledge you've gained and to see some results.

And the days go by... you slowly realize you're actually going nowhere, atleast not as much as you desire and expected.
You know what to do, you know how to do, but you won't seem to be able to apply the knowledge in realtime. And it sucks, i know that feeling.

And you slowly fall into the vicious circle.
You slowly take some other book that you hope atleast will help with your problem.
You pick a book.... you'll read... feels motivated.... days go by.... you realize.... it sucks... you start again( i hope)

THIS IS WHERE "TheWARofART" is a LIFE SAVING BOOK.

When you see that you're going nowhere even after knowing what to do. You'll slowly fall into the depressing thought process that may be YOU WILL NEVER BE THAT GUY YOU WANNA BE.

In every self-help book that we read hardly anyone was able to put the problem we are facing in such a way like in WARofART, where it truly kicks in your ass and makes you aware of the RESISTANCE you're facing ever since you know your self.

if you suck at taking ACTION about anything, and feeling how to do it. Just pick up this book and read it... take the book with you, when ever you're feeling of resistance or its disguised forms, read few pages from the book.

I bet you wont be sitting there idle once you finish this true gem of a book.. but will go and do your long held unfinished, undared stuff.

This is my first review ever since i'm puchasing books/anything from amazon. I thought of writing for some.. but you see RESISTANCE is a b***h. but now I did.

It's all those simple actions that makes a difference in a long run. And WarOfArt will help you beat the RESISTANCE and take that ACTION.

James Charles
1.0 out of 5 stars What a load
Reviewed in the United States on 12 August 2018
Verified Purchase
Here is this book in a nutshell: what do you want to do? Have discipline and do it. I just saved you ten dollars. You're welcome.
Read more
757 people found this helpful
Report abuse
See all reviews
Back to top
Get to Know Us
Make Money with Us
Let Us Help You
And don't forget:
© 1996-2021, Amazon.com, Inc. or its affiliates