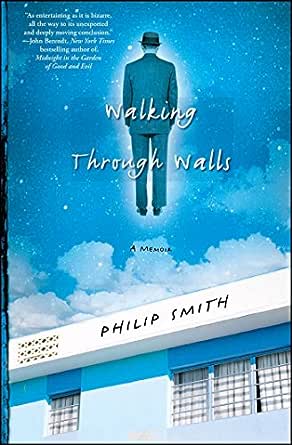 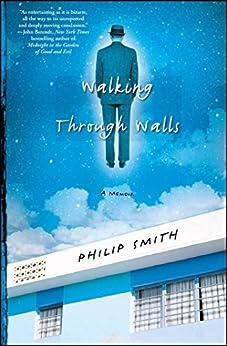 "Walking Through Walls is a funny and poignant memoir about growing up in a family as strange and mysterious as the Bermuda Triangle -- Dad is a psychic healer with a day job interior decorating for dictators, the dead speak, and adolescence is an altered state of grace." -- Dirk Wittenborn, author of Pharmakon and Fierce People "A startling story, beautifully told. If you believe that science can explain everything, this book might change your mind. Walking Through Walls is a window into a fascinating world through the sensitive eyes of an observant son." -- Delia Ephron, author of Hanging Up "At long last, a subject worthy of a memoir. Philip Smith recounts the story of his father, a visionary, a psychic healer, and a saint, with matter-of-fact grace, without ever denying how difficult it was to be the child of a man with unlimited supernatural gifts. Lew Smith was a man we are unlikely to ever see the likes of again, one of the few fathers in literature whose death I mourned as if I'd known him. I wish I had known him; he was a miracle. Every page of Walking Through Walls reminded me of how vast the universe, and how meager the dreams of our philosophies." -- Haven Kimmel, author of Iodine and A Girl Named Zippy "Philip Smith's compellingly readable memoir of his father -- a psychic, exorcist, hands-on-healer, and...decorator! -- is as entertaining as it is bizarre, all the way to its unexpected and deeply moving conclusion." -- John Berendt, author of Midnight in the Garden of Good and Evil and The City of Falling Angels --This text refers to an alternate kindle_edition edition.

Philip Smith is the former managing editor of GQ and an artist whose works are in the permanent collections of the Whitney Museum, the Dallas Museum of Art, and the Detroit Institute of Arts, among many others. He lives in Miami. Visit him online at www.WalkingThroughWallsTheBook.com. --This text refers to an alternate kindle_edition edition.

4.6 out of 5 stars
4.6 out of 5
85 global ratings
How are ratings calculated?
To calculate the overall star rating and percentage breakdown by star, we don’t use a simple average. Instead, our system considers things like how recent a review is and if the reviewer bought the item on Amazon. It also analyses reviews to verify trustworthiness.

Cassie
5.0 out of 5 stars EXCELLENT Book, with Lots of Humor non-stop!
Reviewed in the United States on 2 December 2018
Verified Purchase
Wonderful, excellent book ... I would highly recommend this book to anyone interested in improving their spiritual understanding of what it takes to open oneself up in order to become a healer. At least the book shows what this one person - the writer's father - did to be able to do what he did. And the writer has a way with words that has almost continuous non-stop humor all the way through ... at least, as far as I have read so far. It doesn't move very fast until you get to about page 45 or 50, so bear with the voluminous descriptions of what is happening during these early time in the writer's life ... but after that it speeds up and is far more interesting. That's the way it was with me, in any case. I think that you will enjoy this book, if only for the humor and what it was like during the early 1950's and '60's! If you are interested in healing then there will be far more for you to learn and understand and enjoy. Give it a try - I think that you will like this book!
Read more
2 people found this helpful
Report abuse

Christine Pincince
5.0 out of 5 stars You need to be able to trust this author and just let his life story into your heart..
Reviewed in the United States on 23 October 2019
Verified Purchase
at my age now,74, I remember well the times this talented author grew up and lived through. Oh how I would have loved to have been his next door neighbor. His honesty and baring of himself is so very touching, He wrote with so much openingness and was so real that often tears just happened. I will be giving this book at Christmas to my beloved best friend who i know will recognize the time and vibes of his whole incredible story. For one thing we had a person in our life a bit similar to his dad. I read a lot, but rarely am I so touched and impressed with a work as I was with Mr Smith's raw honest gift to the world. Wish I could give this book 22 stars!
Read more
One person found this helpful
Report abuse

Gayla Gordon
5.0 out of 5 stars It's A Pointer Toward Potential
Reviewed in the United States on 26 May 2014
Verified Purchase
I loved this book and wish it would be widely read with an open mind. If people could absorb the implications of the human potential which Lew Smith demonstrated, maybe more people would reach out to achieve such powers for themselves or, at least, they might not be so judgmental and skeptical of people who have... And then the world would be a much healthier place.

In the sixties and seventies, I was into the same things Lew Smith was, from Macrobiotics to pendulums. I still use my pendulum daily, like for which grapefruit to choose out of the bunch, and I've managed to facilitate some healing, here and there. But, I never achieved the levels of mastery of Healing Powers, like Lew did. On one hand, this book made me wish I had, but on the other hand, it made me grateful that I did not, because, I can't imagine handling the minions of people in need as graciously and selflessly as Lew managed. He was truly a remarkable man and I'm very grateful to his son Philip, for sharing his most extraordinary father with us via this wonderful memoir. - Thanks, Philip!

PS
I'm also an accomplished artist, and I'm astonished at the recognition bestowed upon Philip. The fact that he, too, tapped into some ultra-extrodinary circles, early on in his career, like with Warhol, shows that he's absorbed much of his father's magic, even though he's channeling it through a different medium. I'd love to see his work.
Read more
2 people found this helpful
Report abuse

L. M. Spaeth
5.0 out of 5 stars A Gifted Man Ahead Of His Time
Reviewed in the United States on 22 October 2010
Verified Purchase
Finished reading this book and found it amazing, astounding and absolutely humorous. The ending itself was just too fabulous to dismiss and ironic to say the least. What a life Philip Smith had with his father, a psychic healer extraordinaire. Lew Smith was so far ahead of his time and brilliant to say the least. To heal people that way he did back then and to find that his theories, charts, contacts with those in the afterlife feeding him the information and then Lew using it to help/save others, well we can only aspire to do half of that today...if the medical society would only listen.

I am also terribly intrigued with the paintings Philip Smith does (after viewing his website). He actually incorporates his father's ideas, as well as Arthur Ford's, Chander Sen's, etc. It seems Philip is channeling all these people into his artwork and it is mesmerizing to say the least. Learning the various things I am through my associations with gifted numerologists, astrologers and psychic mediums, I can see what Philip's paintings represent and mean. Also on Philip's website are some of the drawings his father was directed to do of charts, diagnostics, etc. and the now famed pendulum he used. There are people out there who are totally gifted and Lew Smith was definitely one of them.

Thank you Philip for sharing your fascinating life with your remarkable father, with us. If only we could have known him too.

This book was very well written and not boring by any stretch of the imagination. To read something so in-depth and to have it to be humorous too is an added plus. It was like Maxwell House Coffee..."good to the last drop".
Read more
3 people found this helpful
Report abuse
See all reviews
Get FREE delivery with Amazon Prime
Prime members enjoy FREE Delivery and exclusive access to movies, TV shows, music, Kindle e-books, Twitch Prime, and more.
> Get Started
Back to top
Get to Know Us
Make Money with Us
Let Us Help You
And don't forget:
© 1996-2020, Amazon.com, Inc. or its affiliates