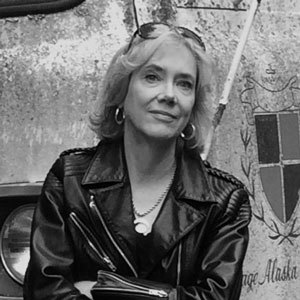 by Elizabeth Hand (Author)
4.1 out of 5 stars 44 ratings
See all formats and editions
Sorry, there was a problem loading this page. Try again.

Beginning her first year at the University of the Archangels, Katherine Sweeney Cassidy accidentally discovers the existence of the Benandanti, a clandestine order that has been secretly manipulating the world's governments and institutions.
Read more
Previous page
Next page

A couple of years after seeing Patti Smith perform, Elizabeth Hand flunked out of college and became involved in the nascent punk scenes in DC and NYC. From 1979 to 1986 she worked at the Smithsonian Institution's National Air & Space Museum; she was eventually readmitted to university to study cultural anthropology, and received her B.A. She is the author of many novels, including Winterlong, Waking the Moon (Tiptree and Mythopoeic Award-Winner), Glimmering, and Mortal Love, and three collections of stories, including the recent Saffron and Brimstone. Her fiction has received the Nebula, World Fantasy, Mythopeoic, Tiptree, and International Horror Guild Awards, and her novels have been chose as New York Times and Washington Post Notable Books. She has also been awarded a Maine Arts Commission Fellowship. A regular contributor to the Washington Post Book World and The Magazine of Fantasy and Science Fiction, Hand lives with her family on the Maine Coast.

4.1 out of 5 stars
4.1 out of 5
44 global ratings
How are ratings calculated?
To calculate the overall star rating and percentage breakdown by star, we don’t use a simple average. Instead, our system considers things like how recent a review is and if the reviewer bought the item on Amazon. It also analyses reviews to verify trustworthiness.

cinephiliagal
4.0 out of 5 stars frightening, primal, mythic, almost epic
Reviewed in the United States on 5 February 2021
Verified Purchase
I read this book when it first came out in paperback 25 years ago. It quickly enthralled me and I could not put it down. Clearly a lot of research went into it, yet it never feels that way -- the story seems to evolve naturally, although it's not natural -- it's definitely unnatural or supernatural.

There are ancient, mythic, primal themes here, handled in a way that starts out a bit silly (as college kids are), moves through spooky, and becomes suspenseful and terrifying. It's part coming of age tale, about how you can fall in love, sort of, or be enthralled, with new friends and a certain milieu and with the person you seem to be around them... But it's also about how one can be drawn into things one shouldn't by a charismatic, even fanatical, friend -- and about how, when you mess with supernatural forces, they may mess back.

No spoilers -- you owe it to yourself to read this. This was the first book by Hand I had ever read (well, actually, I'd read a couple of her novelizations of screenplays of movies before this, but I didn't realize it at the time). When I first read it, I wasn't sure if it was feminist or misogynist. But it's neither: it's just a damned addictive suspense novel about old, ancient mythologies being unwillingly resurrected in the present by foolish young people who don't understand the forces they're playing with... or do they?

I fell away from Hand's books for a while but I am catching up again. And I started by first re-reading this. It truly had made such an impression back then that, more than 25 years after I first read it, I couldn't wait to re-read it. And, unlike many things that I liked 25+ years ago, it still cast it's spell over me and I couldn't put it down -- again.
Read more
2 people found this helpful
Report abuse

Katy Lohman
5.0 out of 5 stars Bloody Good Read
Reviewed in the United States on 17 July 2017
Verified Purchase
I have read this book at least twice now, and it only gets better at every reading. Sweeney's adventures in a magic college, with hypnotizing Angelica and fey Oliver, was a heady rush of energy, drunkenness and observation. The Goddess as dark, devouring Mother, as well as demon (Eisheth), was both interesting and terrifying. The battle between the light-and-order oriented Benandanti, and the dark-and-chaos oriented priestesses, was intriguing: at first I rooted for the goddess-worshipers, until their focus turned to death and the many sacrifice of others. There were a couple of narrator changes, but they enhanced rather than detracted from the plot. Lavish descriptions, engaging characters and a plot with many twists - I will be reading this book again.
Read more
13 people found this helpful
Report abuse

Vinn Sends
4.0 out of 5 stars Pre-Harry Potter, polytheistic Paganism, a magic necklace, moon goddess worship
Reviewed in the United States on 4 July 2019
Verified Purchase
I enjoyed this nearly 500 page fantasy novel, despite the fact that I don't read many fantasy books. I read this as part of my research on the influence of occult ideas in popular culture. This novel is darker and edgier than Harry Potter novels.
"Waking the Moon" also contains an underlying theme of female power and goddess worship. It also contains animal sacrifice, ancient magic artifacts, Moon goddess initiates sticking it to the all male secret society, selective mating bloodlines, secret agendas, etc. This is a very well-written novel. Elizabeth Hand keeps the story and the prose tight up to near the end of the story when it is loosely wrapped up. This is smart fantasy written by someone with an obvious knowledge of anthropology and ancient religions. Waking the Moon is also the title of a book by one of the main characters in the eponymous story.
Read more
5 people found this helpful
Report abuse

Veronica Lynn Pit Bull
4.0 out of 5 stars A very well written, well researched, linguistically beautiful tale.
Reviewed in the United States on 3 January 2014
Verified Purchase
Waking the Moon is a beautifully written story with poetic, lyrical prose. I first read it over 20 years ago and it has stood the test of time more or less. I recently re-purchased it for kindle and while I enjoyed a second reading I was not quite as entranced as I was initially; but then I have developed more of a taste for action and less patience for lush, verbose, atmospheric descriptions. Still it is a very well written, well researched, linguistically beautiful tale.

Waking the Moon begins in the 1970's and centers around 3 undergraduate students at The University of the Archangels and Saint John the Divine - however the Divine is not just any university and these are not just any college students. The Divine is the epicenter of the Benandanti - the ultimate Old Boys Network. The chosen ones who for millennia have watched over mankind, preserving the order of our Patriarchal way of life; watching and waiting for the awakening of their ancient enemy, for a resurgence of old ways and old deities. The Benandanti did their best to stamp out the old religions, the goddess based traditions. And so they watch and wait for a Sign, half hoping it might presage not Her return but a Second Coming of a Great Good Man. Yet underneath the whole Indo-European tradition is an even older tradition that goes back thirty thousand years.

She who has a dozen names in every tongue Othiym, for aeons she has been waiting for the lunula to be found, for the right woman to be born and for the moment when her talisman and her chosen daughter would be brought together. And for all those aeons The Benandanti have watched and waited and searched and prepared - in each generation making certain that there would be one young man who might be strong and beautiful enough to win her, to seduce her and so weaken her.

And so the tableau plays out yet again with Angelica and Oliver, students of The Divine - both with strong family ties to the Benandanti and their destinies linked. A spell is cast to sunder their connection, and into the mix is thrown Sweeney Cassidy, the narrator, the ordinary girl who's life brushes up against and becomes inextricably entangled in the extraordinary.

While Waking the Moon deals with the resurgence of the Goddess religion and matriarchal society; Othium Lunarsa is not presented as a benevolent Goddess; as much as she is the mother and creator she is also the destroyer - the mouth of the world, the ravener of the dead, the void, the abyss, chaos and she demands blood sacrifice for peace and the new world order that she would usher in is terrifying.
Read more
12 people found this helpful
Report abuse
See all reviews
Back to top
Get to Know Us
Make Money with Us
Let Us Help You
And don't forget:
© 1996-2021, Amazon.com, Inc. or its affiliates