The Wahls Protocol and over 1.5 million other books are available for Amazon Kindle . Learn more
Share <Embed> 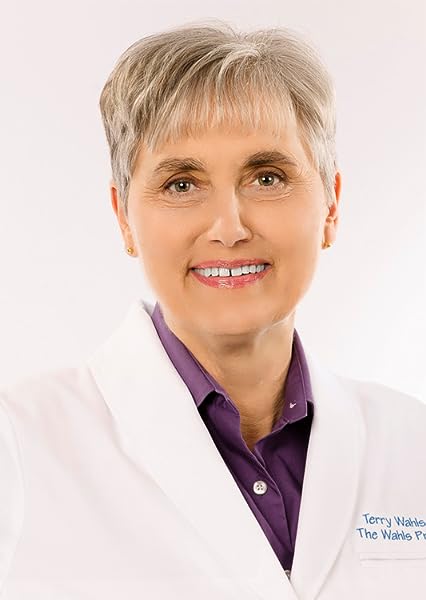 Page 1 of 1 Start overPage 1 of 1
This shopping feature will continue to load items when the Enter key is pressed. In order to navigate out of this carousel please use your heading shortcut key to navigate to the next or previous heading.
Back
Next
Start reading The Wahls Protocol on your Kindle in under a minute.

Terry Wahls, PhD, is a clinical professor of medicine at the University of Iowa Carver College of Medicine in Iowa City. She has made it her mission to spread the word about the Wahls Protocol through the book, her lectures, her website and Food as Medicine classes. She lives in Iowa City with her wife and daughter. Her son, Zach Wahls, is the author of the New York Times bestseller My Two Moms.

4.6 out of 5 stars
4.6 out of 5
3,241 global ratings
How are ratings calculated?
To calculate the overall star rating and percentage breakdown by star, we don’t use a simple average. Instead, our system considers things like how recent a review is and if the reviewer bought the item on Amazon. It also analyses reviews to verify trustworthiness.

Ruth
5.0 out of 5 stars It makes me want to be the best me I can
Reviewed in Australia on 23 August 2018
Verified Purchase
I am reading the book because I have some health issues and for my son who has chronic fatigue. We can’t wait to get more fully immersed in the Whal way of living and are looking forward to positive results.
Read more
Helpful
Comment Report abuse

Lyn
4.0 out of 5 stars Good reference at times
Reviewed in Australia on 19 September 2020
Verified Purchase
A lot of information to get through just need to be patient
Read more
Helpful
Comment Report abuse

Kristan Braun
5.0 out of 5 stars Well worth a read!!
Reviewed in Australia on 9 August 2015
Verified Purchase
Terrific book - very informative for anyone with an interest in health or those who have a chronic illness.
Read more
Helpful
Comment Report abuse

Amazon Customer
4.0 out of 5 stars Surprising results
Reviewed in the United Kingdom on 26 October 2017
Verified Purchase
I don't normally write reviews and I dont normally follow diets. However, due to several long term and increasingly random symptoms which the Doctor largely put down to stress and/or menopause, I started to investigate if there may be some link that I was missing. This ultimately led to this book. Having read the whole thing through, given a lack of diagnosis to work with, I went with the 1st level diet with about half the elements of the Paleo diet. The main focus being immediate removal of gluten, dairy and sugar. One of my symptoms had been severe ligament pain for about 12 months in my right leg that on a bad day meant I couldn't walk very well. Physio hadn't touched it. After 1 week of no gluten, sugar or dairy, the pain just disappeared. Other symptoms have also decreased significantly. I have made no other lifestyle changes that would account for this. My only issue with the book is that it does seem (to me) to be aimed at an audience that does not eat significant veg and fruit already, so for someone on a quite healthy diet, the biggest leap will probably be what foods you need to remove completely rather than what you need to start eating. That said, it's easy to understand (apart from the use of American cup measurements). I would recommend careful reading before leaping in as doing these diets incorrectly could, I suspect, have some negative impacts.
Read more
79 people found this helpful
Report abuse

marlenep
5.0 out of 5 stars EVERYONE MUST READ THIS BOOK
Reviewed in the United Kingdom on 24 May 2019
Verified Purchase
I bought this book as I have a chronic autoimmune condition and doctors can't help much without fill me with dangerous tablets which I always refused. I've been controlling symptoms with diet but felt I needed to be more strict and get more knowledge about what help and what doesn't. This booked helped a lot. Very easy to understand even for people without medical knowledge, very well structured and interesting. Doesn't seem that you are reading a medical book or anything. I read it in a week on my holidays. Everyone should read this book and try to follow the diet as close as possible even without an autoimmune condition. I'm glad I bought it and wish I have done sooner. Many people wouldn't need medication if they practiced a good diet. Everyone must read this book but specially if you have an autoimmune, cancer, diabetes, asthma, vascular conditions, cardiac conditions, fertility problems and undiagnosed conditions. I'm the cooker in the house and very slowly and progressively will put everyone on this diet (don't say anything) ;)
Read more
18 people found this helpful
Report abuse

Janetta Burt
5.0 out of 5 stars Best book so far on healing my disease, sarcoidosis, felt better in days!
Reviewed in the United Kingdom on 29 August 2018
Verified Purchase
This is a brilliant book, so much information. I think everyone would benefit from reading this and adopting some of the diet. It has to be good for you. After 3 days I felt less brain fog, less bloating, I was amazed. Very well written. I loved the way the author kept encouraging you all the way through the book. I have learnt so much and believe we abuse our bodies from a very young age through incorrect diet. It didn’t take more than a week to realise I have a gluten intolerance. It is a bit heavy at times but worth reading to the end. She is a complete inspiration.
Read more
14 people found this helpful
Report abuse

James Trueman
5.0 out of 5 stars Get it!
Reviewed in the United Kingdom on 30 December 2015
Verified Purchase
This is gonna be a lifesaver. My wife has MS and we are moving from Paleo/Primal to 100% Wahls. Well written (easy to understand), gives the underlying science without losing you, and in these circumstances - the book gives us a light at the end of the tunnel. If you have ended up in a similar boat - get it!
Read more
17 people found this helpful
Report abuse
See all reviews
Get FREE delivery with Amazon Prime
Prime members enjoy FREE Delivery and exclusive access to movies, TV shows, music, Kindle e-books, Twitch Prime, and more.
> Get Started
Back to top
Get to Know Us
Make Money with Us
Let Us Help You
And don't forget:
© 1996-2020, Amazon.com, Inc. or its affiliates