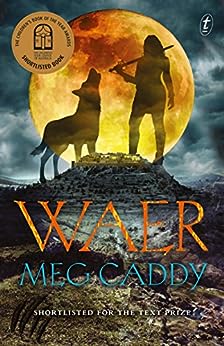 Meg Caddy is a bookseller by day and a boarding-school tutor by night. Her first book, Waer, was shortlisted for the 2013 Text Prize and the 2017 CBCA Children's Book Awards. She lives with two rescue cats and an ever-expanding bookshelf. --This text refers to the paperback edition.

The Librarian
5.0 out of 5 stars Fantastic read
Reviewed in Australia on 29 August 2016
Verified Purchase
A magnificent fantasy novel from a gifted new author. Strong characters. Rivals the Lord of the Rings books. I really enjoyed this novel. Recommended.
Read more
Helpful
Report abuse
See all reviews

Amazon Customer
5.0 out of 5 stars Five Stars
Reviewed in the United States on 6 May 2016
Verified Purchase
An extraordinary debut! Highly recommended
Read more
Report abuse
See all reviews
Back to top
Get to Know Us
Make Money with Us
Let Us Help You
And don't forget:
© 1996-2021, Amazon.com, Inc. or its affiliates