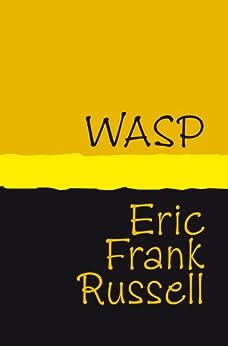 by Eric Frank Russell (Author) Format: Kindle Edition
See all formats and editions
Sorry, there was a problem loading this page. Try again.
The war had been going on for nearly a year and the Sirian Empire had a huge advantage in personnel and equipment. Earth needed an edge. Which was where James Mowry came in. If a small insect buzzing around in a car could so distract the driver as to cause that vehicle to crash, think what havoc one properly trained operative could wreak on an unuspecting enemy. Intensively trained, his appearance surgically altered, James Mowry is landed on Jaimec, the ninety-fourth planet of the Sirian Empire. His mission is simple: sap morale, cause mayhem, tie up resources, wage a one-man war on a planet of eighty million. In short, be a wasp. First published in 1957, WASP is generally regarded as Eric Frank Russell's best novel, a witty and exciting account of a covert war in the heart of enemy territory.
Read more
Previous page
Next page

The classic novel of urban terrorism. --This text refers to an alternate kindle_edition edition.

Eric Frank Russell (1905-1978) was the first British writer to contribute regularly to Astounding Science Fiction, his first story, 'The Saga of Pelican West', appearing in that magazine in 1937. His novels include Sinister Barrier, Wasp and The Great Explosion and his short fiction has appeared in a number of collections. --This text refers to an alternate kindle_edition edition.

Eric Frank Russell (1905-1978) was the first British writer to contribute regularly to Astounding Science Fiction, his first story, 'The Saga of Pelican West', appearing in that magazine in 1937. His novels include Sinister Barrier, Wasp and The Great Explosion and his short fiction has appeared in a number of collections. --This text refers to an alternate kindle_edition edition.
Read more

Miss Marple
5.0 out of 5 stars Highly Recommended - adventure, humor, - this story has almost everything
Reviewed in Australia on 4 January 2015
Verified Purchase
This is one of the best books I've ever read. I read it first many years ago & I re-read it occasionally. There's a lot of humor in this sci fi tale and it's also very exciting.
Read more
Helpful
Report abuse

M. W. Stone
5.0 out of 5 stars Underrated Masterpiece By Underrated Man
Reviewed in Australia on 21 January 2014
"Wasp" is yet another of that enormous sf library which I first encountered round about age eleven - and find myself still going back to at 66. Hope that says something about the books rather than about me. Be that as it may, it is a list to which the late Eric Frank Russell has contributed more than his fair share.

When things military come into Russell's tales, they tend to draw upon his personal experience from WW2, and "Wasp" is no exception. Based on proposals from Russell's time with British Intelligence in the Pacific theatre, it is the story of one man against an Empire - a solitary agent sent into the heart of enemy territory to cause chaos and mayhem out of all proportion to his resources.

James Mowry is the typical Russell hero, a solitary type not over-fond of authority, but who would, in his own words "rather walk into something than be frogmarched into it" and will, if absolutely cornered, acknowledge that some kinds of authority are a good deal nastier than others. He finds himself cordially invited to take part in just such a conflict to "defend the bad against the worse", between Terra and the Sirian Combine, a futuristic version of the Japanese Empire of 1942, which it resembles right down to the name of its secret police. He is dropped in (surgically disguised to resemble a Sirian) entirely on his ownsome, his assignment being to create, single-handed, the appearance of a powerful resistance movement. This he does to spectacular effect, causing the enemy to tie up whole shiploads of troops and agents to suppress a movement that in fact is only one man.

There is room for a quibble or two. Considering that "Wasp" is supposed to be several centuries in the future, the technology, save for the existence of spaceships, is remarkably little advanced on 1957.

Less excusable is the total absence of any female characters. This sort of misogyny was common in early sf, and perhaps acceptable, given contemporary assumptions, where the characters were space pilots and the like. However, for what is essentially a "resistance fighter" novel it was anachronistic even for WW2, let alone a decade later.

I have less sympathy for the criticism I have run into in a number of places, which dislikes the novel because it somehow takes the wrong side in the "war on terror", making the terrorist the Good Guy. To my mind, anyone thinking like that suffers from myopia bordering on cataract. There have been plenty of instances in my lifetime, and even more in Russell's, where the Good Guys were defined by their enemies as "terrorists". Mowry's "victims" were typically secret policemen and other official types, surely fair game when there's a war on. Nor is it likely that his tactics would have been all that effective among a loyal population which still had confidence in its leaders. Basically, I think it's fair to say that any society which can be brought down, or even seriously undermined, by "Wasp" methods probably deserves to be. If anything in it makes us uneasy, perhaps we ought to be taking a hard look at ourselves rather than at the book.

In short, another "must read" for anyone already fond of Russell, and a good place to start for anyone who hasn't encountered him. Go out and get it
Read more
One person found this helpful
Helpful
Report abuse
See all reviews

J. Trainer
4.0 out of 5 stars An excellent novel
Reviewed in the United Kingdom on 1 June 2015
Verified Purchase
Earth and its ‘Terran’ population is at war with the Sirian Empire and the hero James Mowry is called upon to do his bit. Surgically altered to look like the enemy he is sent to the planet of Jaimec to wreak havoc on the tyrannical regime. The novel gets its title from an analogy used by his recruiter: a wasp, trapped inside a car, causes the driver to swerve and crash, killing all the passengers.

What a great story this is, funny, thought provoking and – despite the science fiction setting – utterly believable. Mowry’s character is carefully drawn and well rounded. The reader empathises with all the emotions of isolation and loneliness experienced by a lone agent working behind enemy lines.

The only downside of the Kindle version is that it feels as if it has been précised from the original – and not very well so it lacks a lot of the fullness and flow of Russell’s original. But well worth a read.
Read more
4 people found this helpful
Report abuse

A N Other
5.0 out of 5 stars Intriguing Premise.
Reviewed in the United Kingdom on 21 October 2017
Verified Purchase
In many respects Wasp is a "single-hander". The "wasp" of the title is the only constant character throughout the story yet despite relatively little direct interplay between principal protagonists and antagonists the narrative is engaging and moves at a good pace as the "wasp's" efforts to undermine the enemy grow and evolve.
Read more
One person found this helpful
Report abuse

jason owen
4.0 out of 5 stars the sting's in the tale
Reviewed in the United Kingdom on 13 May 2016
Verified Purchase
An enjoyable read about one man waging a terrorist war on another planet. You can't help but root for him, even though he is utterly committed to undermining an enemy by whatever means necessary; against an alien species that is not all that alien, apart from the physical aspects. This is no gung-ho starship troopers war, but one in which quite a few questions are raised about freedom fighters and terrorists all being in the perception: spin is everything. Highly recommend it.
Read more
One person found this helpful
Report abuse

Phil
4.0 out of 5 stars Enjoyable
Reviewed in the United Kingdom on 2 August 2013
Verified Purchase
I was looking forward to Wasp for several months while it sat preordered on my Amazon account.

In reading it was quite a bit different in tone to what I had pictured but still enjoyable. A decent Sci Fi spy story. Short and quickly read.
The language is very much in the same vein as most 50-60's Sci Fi (apologies is this was written earlier), something which I quite enjoy the simplicity of and most Sci Fi readers will be familiar with if you have read through the classics.

One thing occurred to me after reading this, without checking back I can't remember a single female being mentioned in the book, not just a lack of characters - not even people in the street scenes!
Read more
One person found this helpful
Report abuse

Thomas Hope
4.0 out of 5 stars An Engaging Read
Reviewed in the United Kingdom on 24 January 2013
Verified Purchase
This is a wonderful premise, and an enjoyable read.

The 'wasp' is an agent of what might best be described as Earth's secret services, sent alone to another world to cause as much havoc as possible, to help break the stalemate in an interstellar war. The story is coherent, and sometimes funny, and you'll find yourself racing through the prose with ease.

The alien world is still a human world, so there's not a huge amount of fascination to be had from a world-building perspective, and one is left feeling that this story might just as well have been set entirely on Earth, with the wasp dropped into some opposed country. Or in other words, the space-opera angle here is not particularly significant. But the plot is engaging, and our central character is nicely three-dimensional - well worth a look.
Read more
2 people found this helpful
Report abuse
See all reviews
Report an issue
Does this item contain inappropriate content?
Report
Do you believe that this item violates a copyright?
Report
Does this item contain quality or formatting issues?
Report