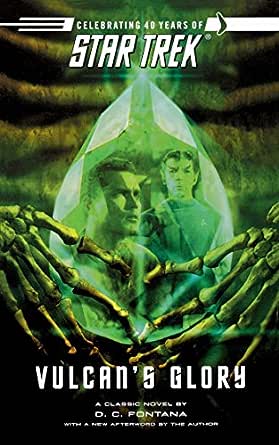 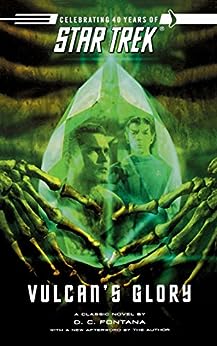 Scott Fraser
3.0 out of 5 stars All Aboard For Spock's First Mission On The Enterprise.
Reviewed in the United Kingdom on 10 February 2007
Verified Purchase
This Star Trek novel has the distinction of being written by a member of the original script writing team from the Original Series in the 1960's, a practice which is still quite rare and as such is the book's major selling point. This does not guarantee a good story however but fortunately this title is generally OK without being spectacular.

The plot rotates between four separate strands, Spock's first mission aboard the Enterprise, the discovery of a lost Vulcan treasure, a resumption of a former mission of Captain Pike and a murder/whodunnit type mystery. I won't go into plot details for fear of spoiling the book but suffice to say that the author, D.C Fontana has managed to weave a very consistant storyline which encompasses and links all the various plot strands into a satisfying novel.

The book is of great interest to Star Trek fans for it's use of Captain Pike from the original 1964 pilot episode "The Cage".There have only been about four such books in over thirty years, and of gaining some additional character insight into the young Spock, a Spock who is very different from the one we know from the TV series.

L&H
3.0 out of 5 stars Soso
Reviewed in the United Kingdom on 11 December 2016
Verified Purchase
D. C. Fontana was a story editor in "Star Trek TOS" and in "ST - the Animated Series", and contributed two excellent stories there ("Journey to Babel" and "Yesteryear"). On YouTube I saw an interview with her: she seems to have a normal-sized ego compared to Roddenberry, Ellison and the likes. "Vulcan's Glory" is Fontanas only ST-contribution where I didn't catch fire.
Read more
Report abuse

ThatVulcanBitch
5.0 out of 5 stars At last proper Spock!
Reviewed in the United States on 17 May 2018
Verified Purchase
As with most of the old school Trek novels, it’s self-contained, and the canon-based characters have priority. You’re not subject to mounds of details and backstories about minor characters from some other novel or other, which is something I miss.

Spock is the main character, sharing almost equal time with Pike and Number One, and thanks to DC being the author—HE’S DONE RIGHT! It’s been forever since I read a book where Spock was done right. I realize not everyone’s as obsessed with him as I am, but I often find myself cringing when I read the current crop of TOS novels. (Can’t wait for the shift to the Kelvin timeline where they won’t be so mired in canon.)

Pike and Number One were also nicely handled although their stories were more filler than substance.

One thing I found interesting was there being 18 Vulcans on Pike’s crew. To be honest, I never did understand why Spock was the only alien on Enterprise with TOS came along, and it was always nice that the alien representation went up in the novels. But for their to be so many Vulcans was refreshing. Their involvement offered some nice bits and pieces of Vulcan culture and history, and then there’s T’Priss.

She was a wonderfully detailed, without being overly written character. Her and Spock’s connection happened quickly, but it didn’t feel forced. T’Priss was a nice counterpoint to T’Pring, and a lot of questions about Spock’s relationship with his betrothed were covered.

I’ll sign off here to avoid any spoilers.
Read more
6 people found this helpful
Report abuse
See all reviews
Get FREE delivery with Amazon Prime
Prime members enjoy FREE Delivery and exclusive access to movies, TV shows, music, Kindle e-books, Twitch Prime, and more.
> Get Started
Back to top
Get to Know Us
Make Money with Us
Let Us Help You
And don't forget:
© 1996-2020, Amazon.com, Inc. or its affiliates