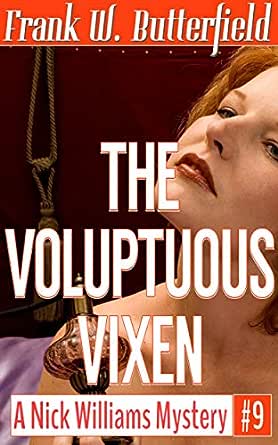 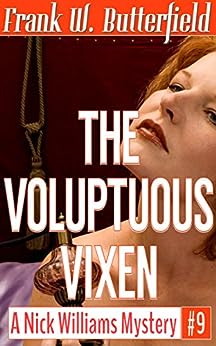 Nick and Carter are sailing across the sea to Honolulu on an impromptu holiday.

For the sake of propriety and decorum, the ship's captain pairs them off with a "lady couple" who turn out to be much more than they appear at first glance.

When one of them turns up dead in Nick and Carter's cabin, the hunt is on to find the other one before it's too late.

Sean Andrew McNamara
5.0 out of 5 stars A different sort of Love Boat
6 May 2017 - Published on Amazon.com
Verified Purchase
The Voluptuous Vixen is Frank Butterfield at his best writing to date! The Charm and concerns of the first few Nick Williams Mysteries have us on a 1958 boat ride to Hawaii with a supporting cast of characters that keep you on the edge of your seat! Nick and Carter Jones have a chance to take some time for themselves thru the unlucky injury of Nicks stepsister at her wedding! They take over the bridal honeymoon suite to ride the waves on the big boat-a chance to ground themselves against what has been a very busy year fraught with dangers, heartbreak, deaths and personal growth against the back ground of San Francisco and Consolidate Security, Nick and Carters organization. We get introduced to this books cast of characters which include a wonderful Rosalind Russell appearance, Gale Storm and the soon to be Della Street-Barbara Hale and husbands. They comprise the Captain's table and weave throughout the story. There are murders, intrigues and deceptions and Nick and Carter are called to help!
I loved this. I hated the bigotry and nastiness of the uninformed- the snide comments on their relationship and the continued presence of the curse of the Hearst newspapers trying to slander Nick and company at every crossroad.! Frank Butterfield wrote a good story and a joy to read. His use of period established ship customs was great. His observations about dress and social norms-right on the mark.. But the inventive use of Hollywood as it moves from film and stage to television and the people who populated it in the late 50's was keenly observed and woven into the dialogue. I can't wait for more Nick Williams!

Ulysses Grant Dietz
4.0 out of 5 stars Book nine and still among my favorites...
22 April 2017 - Published on Amazon.com
Verified Purchase
It’s hard to believe that this is Frank Butterfield’s ninth book about Nick Williams. The other thing that this particular episode in the Nick and Carter series makes explicit is that this whole long set of stories has only covered a single year in the life of Nick Williams, the richest gay man in the world, and his beloved husband, ex-firefighter Carter Woodrow Wilson Jones.

There is nothing really new to say, as a reviewer, except that the adventure in “Voluptuous Vixen” is rather fun, for two distinct reasons. One, it takes place on an ocean liner called the Hilo, bound from San Francisco to Honolulu in 1954. Owing to an absurd snafu at Marnie’s wedding, Nick and Carter end up on the cruise, realizing that they are sorely in need of some real rest. The description of the ship itself, and the way people traveled in the 1950s (with steamer trunks and black-tie for dinner), is all wonderfully laid out for us—and this nostalgic look into the past is part and parcel of what makes these books so engaging. Secondly, Butterfield has decided to bring in real celebrities, in the person of Rosalind Russell and Gale Storm (of My Little Margie fame, one of the biggest early TV show hits). Russell and her husband Freddie Brisson (a great story in itself about which I knew nothing) become real participants in the narrative. This is a moment when the author drives home the fact that both Nick and Carter are indeed notorious—celebrities in their own right—and thus even more like superheroes to the embattled gay folk of the fifties. For all their wealth and power, Nick and Carter are still subject to the deeply-held homophobia of conformist America; and it is those moments of exception—such as Rosalind Russell’s candor and friendship—that bring that reality into high relief.

Butterfield has created this series with a careful balance of romanticism and historical clarity. They are meant to be rosy-colored, but the darkness always lingers at the edges. We know this is a fantasy, and that no gay guys ever lived who were like Carter and Nick; the gay world of post-War America had no heroes to give them hope amidst their (our) oppression. Gosh, I wish these books could be made into a “Masterpiece Theater”-like series of mysteries, with great production values. It is, perhaps, a reminder of the homophobia still very present in the world that such a notion is still an impossible dream.

I don’t think I’ll ever get tired of Nick and Carter.

silvia
5.0 out of 5 stars Another winner
16 August 2019 - Published on Amazon.com
Verified Purchase
This series continues to enthrall me. The latest book takes Nick and Carter away from their beloved San Francisco and onto the decks of the cruise ship, SS Hilo. Let the mystery games begin! The author knows how to build a world that encapsulates the times of the 1950s and the setting of a huge ship. I felt like I was along on the cruise as I dined at the Captain’s table and sat amongst Hollywood celebrities. This mystery was more intricate then some of the earlier books and I definitely got the Agatha Christie vibe. As for Nick and Carter: be still my heart. It’s another winner in an excellent series.
Read more

Lifelong Educator
5.0 out of 5 stars Give us more!!!!!!
18 April 2017 - Published on Amazon.com
Verified Purchase
I have read all nine in this series and can't wait for the author to write more! His style is easy to read and there are interesting plot lines.
Read more
2 people found this helpful

Sam
5.0 out of 5 stars Wonderful
31 January 2019 - Published on Amazon.com
Verified Purchase
I really enjoying the characters and the series. Can't wait to read the next book to see what their next adventure will be
Read more
Go to Amazon.com to see all 17 reviews 4.7 out of 5 stars
Get FREE delivery with Amazon Prime
Prime members enjoy FREE Delivery and exclusive access to movies, TV shows, music, Kindle e-books, Twitch Prime, and more.
> Get Started
Back to top
Get to Know Us
Make Money with Us
Let Us Help You
And don't forget:
© 1996-2020, Amazon.com, Inc. or its affiliates