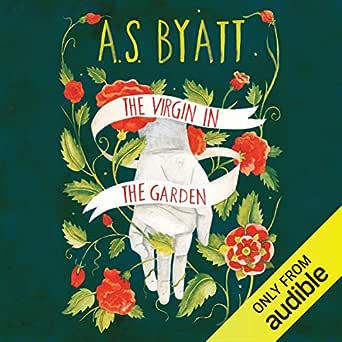 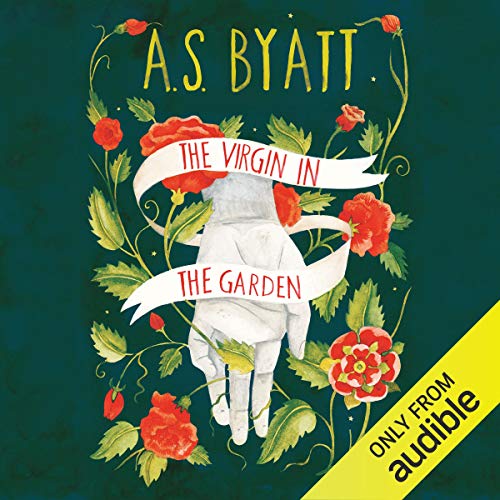 The Virgin in the Garden: Frederica Potter, Book 1

3.6 out of 5 stars
3.6 out of 5
23 global ratings
How are ratings calculated?
To calculate the overall star rating and percentage breakdown by star, we don’t use a simple average. Instead, our system considers things like how recent a review is and if the reviewer bought the item on Amazon. It also analyses reviews to verify trustworthiness.

mr blue
4.0 out of 5 stars Love, lust and madness on the Yorkshire Moors.
Reviewed in the United Kingdom on 10 December 2012
Verified Purchase
This is not an easy book. Sometimes, especially in the first quarter, descriptive passages are grossly overwritten. Too often, but crucially not in the final quarter, I knew what Mrs Byatt was saying made sense but I really did not want to take the time to find it. Perhaps I thought it would be elusive anyway. Nor did I have the required classical knowledge. And finally I had a problem with Frederica, only seventeen for most of the book, but so knowledgeable, so articulate.
The story centres around the Potter family. Bill is head of the English Department in a public school; he is clever, charmless and a bully. His wife suffers. His daughters, one an Oxbridge graduate grammar school teacher, and Frederica, still at school, live at home, as does Marcus, their younger brother, who is 'odd'.
Frederica is a virgin, by the way, and very much wants not to be. Not only a virgin, she is sexually totally inexperienced.
It is a good story. Its themes are sex, madness, and drama. Each is convincingly dealt with, especially the madness. The sheer messiness of sex, both psychologically and physically, is all too real.
A good and demanding read; I look forward to the remaining three in the tetralogy.

William Jordan
4.0 out of 5 stars enjoyable, complex, intricately plotted historical novel
Reviewed in the United Kingdom on 18 January 2012
Verified Purchase
A verse drama celebrating the life of Queen Elizabeth I is performed in 1953, at the time of the coronation of Queen Elizabeth II. The novel deals with the complicated lives of the playwright (a teacher in a Northern school), the actors (pupils from the area plus some visiting professionals), their families and the neighbourhood (notably the vicar).

A historical novel, then, which gives some sense of what it was like to be young in the 1950s. (Perhaps not quite such a vivid sense as Byatt's The Children's Book gives of its late Victorian/early Edwardian era, perhaps because the novel was written at a time only 25 years on from the events it depicts - and many people would remember the 1950s then).) And a novel that also reflects the movements in literature of the day, notably the verse dramas of Eliot and Fry. (There's also an amusing aside about what it would be like to write a contemporary novel like George Eliot by way of Proust - and that is perhaps the sort of thing this novel is.)

The creation of a lively cast of characters is quite an imaginative feat; the plotting is intricate, well worked through and many of the later scenes are very amusing.

My reservations centre on the distance of the author from her characters here - she sees them steadily and sees them whole, but I do not have the same sense of affection for them as in The Children's Book and Possession. And - as is always a risk with a novel with so much in it - not all of it is equally engrossing. I found myself skipping or skimming the chapters devoted to Marcus and his schoolteacher friend and their attempts to plumb the depths of the universe, without feeling that I was compromising my enjoyment of other parts or the whole.

Overall, though, this was interesting and enjoyable - and much of it very enjoyable.

Wynne Kelly
4.0 out of 5 stars Now for the next three books in the Quartet!
Reviewed in the United Kingdom on 5 March 2008
Verified Purchase
This is the huge first part of The Frederica Quartet. It is set in 1950s and cleverly evokes life in suburban northern England. The Potters are a fairly horrific family - bullying father, subservient mother, obnoxious Frederica and troubled Marcus. Only Stephanie, the older sister, comes over as sympathetic. Most other characters are also flawed and tending to be vain, predatory, selfish - or just plain mad.

It doesn't sound like a recipe for a great reading experience but we are soon pulled into the narrative. Will Alexander's pageant be a success or a dramatic disaster? Surely Stephanie the atheist won't marry Daniel (the somewhat dull church minister)? And to whom will the precocious and dislikeable Frederica lose her virginity?

The Virgin in the Garden is a challenging read in parts with many references to classical mythology. She writes with a terrifying mix of comic and cringe-worthy episodes - such as the descent into madness of Lucas and the attempted seduction of Frederica by Ed the travelling salesman.

A tough read in parts but it is worth the effort and I look forward to reading the next three books.
Read more
10 people found this helpful
Report abuse

jaronly
1.0 out of 5 stars Bored to tears
Reviewed in the United Kingdom on 31 July 2018
Verified Purchase
This is one of the most boring books I have read in years. It goes on and on and on and on. Verbose is the word and totally without any literary merit.
Read more
Report abuse

Sverre Svendsen
2.0 out of 5 stars 50% unpalatable tedium....
Reviewed in Canada on 5 June 2014
Verified Purchase
A S Byatt is an illustrious and much awarded English author. This is the first of her books that I have read and it will also be my last. Byatt loves to write and she comes across as a genius by how much knowledge she can present from multiple fields: literature and theatre, science, culture, history, art, etc. But, if I can allow an analogy, she is like a master chef who skilfully creates a vast diversity of cookery but spoils their palatability by using too many spices and flavours. Her writing is self-indulgent, lacking restraint or discipline. She writes long strings of words and phrases, some extending ten or more lines in length. Some pages consist of a single paragraph and many more of only two or three (without dialog). When she latches onto a diversionary subject she can ramble on for pages. No doubt she has impressed critics by her stylistic unconventionality, a literary Picasso.

The story takes place in 1952 and 53. The narrative includes about a dozen characters and the plot revolves around the writing, casting, directing and staging of a play about the life and times of Queen Elizabeth I. Two sisters, as different as day and night, their lunatic younger brother, their imperious father and subordinate mother—the Potters—are central to the story, as well as the playwright, Alexander, adored by the sisters. Dysfunctional families and relationships is the recurring theme throughout. Comedy and farce increasingly flavour the menu from the middle of the book to the end, overcoming some of the tedium. This is the first of four books that follow the life of the youngest sister, Frederica. I persisted to finish this book’s almost six hundred pages but I did not enjoy Byatt’s many aimless diversionary distractions. For me, this book could have been half as long and still have managed to tell what needed to be told. No doubt Byatt intended to convey some deep inner subliminal messages about the futility of living a meaningful life but for me they got lost in her display of artistic profundities unique to her labyrinthic mental disposition!
Read more
One person found this helpful
Report abuse
See all reviews
Get FREE delivery with Amazon Prime
Prime members enjoy FREE Delivery and exclusive access to movies, TV shows, music, Kindle e-books, Twitch Prime, and more.
> Get Started
Back to top
Get to Know Us
Make Money with Us
Let Us Help You
And don't forget:
© 1996-2020, Amazon.com, Inc. or its affiliates