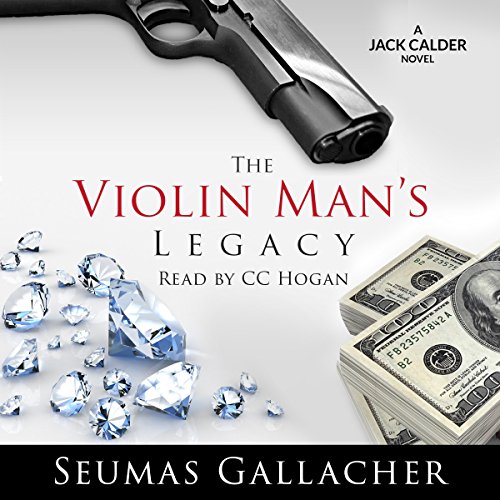 4.3 out of 5 stars
4.3 out of 5
84 global ratings
How are ratings calculated?
To calculate the overall star rating and percentage breakdown by star, we don’t use a simple average. Instead, our system considers things like how recent a review is and if the reviewer bought the item on Amazon. It also analyses reviews to verify trustworthiness.

Enrico Grafitti
5.0 out of 5 stars Cracking read!
Reviewed in Australia on 14 March 2015
Another crackling read from this author. I quickly realised I’d read his two novels in reverse order, but no matter; this one is a great stand-alone tale in it’s own right. Two deadly robberies in Northern Europe are the detonating factors that whisk the protagonists overseas to Triad-infested Hong Kong then to the Bolivian border for an explosive finale to this fast-paced thriller. Looking forward to reading another by Gallacher.
Read more
Helpful
Report abuse
See all reviews

OlgaNM
4.0 out of 5 stars If you enjoy well-researched international thrillers and love team-spirit, don’t miss this one.
Reviewed in the United Kingdom on 13 February 2018
Verified Purchase
I had read Gallacher’s Self-Publishing Steps to Successful Sales a while back and had several of his books waiting to be read but had not managed yet. But when his first novel, The Violin Man’s Legacy became available in audiobook format, I knew I had no excuse.
Although I tend to use the text-to-speech facility on my e-reader, I haven’t listened to many audiobooks (mostly my own) so I was intrigued by the experience. I found the narrator, C.C. Hogan, engaging, able to hold my attention, and very good at keeping the characters separate (and there are quite a few!) and individual. He is also very good at accents and managed the international locations and names without faltering. Unfortunately, my Kindle is quite old by now and could not accommodate the Whispersync option, that would have made it easier to check some things (like names and details), as I also had a copy of the Kindle version of the book.
I’m not a huge reader of spy novels, and although this book is classified within the crime and suspense thriller category, this international action-thriller reminded me in style of many spy/international conspiracy novel, although with a more European feel, and less frantic in pace than many American spy thrillers. There is plenty of action, and even some sex (and yes, the main character is incredibly skilled, can fight like the best of them, and outwit his opponents, although the brains behind the operation is his boss), but there are also slower moments when we learn the back story, not only of the main characters, like Jack and his teammates, but also of some of the people they collaborate with, and even some of their enemies. This allows us to get to know more about the players and to understand how they got to where they are. (The story behind the title and the way it relates to Jack’s past is particularly touching).
The book is narrated in the third person, from a variety of points of view. We mostly follow Jack Calder (as it should be, as this is his series), but we also are party to the thoughts of many other characters, although there is no confusing head-hopping, and even in the narrated version, it is clear which point of view we are being privy to at any given moment. This helps create a more complex story, with layers of information and to get a better grasp of what the different players have at stake. There are those who are only interested in money, others involved in power games and politics, and others for whom reputation and loyalty are the main objects.
The story takes us from London to Amsterdam, Hong-Kong, and South America, and the author is meticulous and well-informed, providing credible settings and a detailed exposition of the procedures and operations that brings to mind the best police procedural novels. But although we follow each detail of the investigations and the operations, there are always surprises to keep us on our toes.
Jack Calder, the central character, is a breath of fresh air in a genre where heroes are almost superhuman and can fight entire wars single-handedly. Although Jack, an ex-SAS captain, is indeed great at his job, he is traumatised by a family tragedy; he is self-deprecating and knows when to give credit where credit is due. He can follow orders and acknowledges his bosses’ superior planning skills. He is also a friend of his friends, and a loyal team-player and the novel highlights how important good relationships and contacts are in the world of international security firms and businesses.
I loved the fact that the characters talk like real people talk (yes, they use clichés sometimes, make bad jokes, and sometimes are lost for words), and, although there is violence and terrible things happen (justice and law are not always on the same side of the divide), there are also very funny moments.
The writing style is fluid and the pace ebbs and flows, with moments that are fast-paced and others that allow us to catch a breath and learn more about the ins and outs of the businesses and the characters involved. Readers need to remain alert, as there are many characters, locations, and plot threads, and, it is important to pay attention to the details.
I recommend this book to those who love spy and international intrigue thrillers, especially to readers who like complex situations and stories with plenty of twists and turns, but who don’t mind stopping to take a breath every so often. A great first book in the series and many great characters I hope to meet again.
Read more
One person found this helpful
Report abuse

Robyn Cain
5.0 out of 5 stars A very happy reader
Reviewed in the United Kingdom on 12 December 2015
Verified Purchase
This is a well written book with a great early hook. From its strong start it continued to be a page turner. The narrative pace was excellent and fast; just how I like my crime thrillers to be. I thought the plot well constructed and alongside Jack, enjoyed working out who the baddies were and bringing them down. Scenes, whether action-packed killings or emotional, were visual/believable. I especially liked the ‘lump-in-the-throat’ inducing moments depicting the father/son relationship and again later with Annie, Roddie’s widow. My preference is always for unflinching tough guys (and gals in this, I’m happy to add), but they must be sensitive too. Despite wanting a little more wordage on the romance/love front, I still unreservedly recommend this novel to anyone who likes their reading filled with busy, well-rounded characters, believable geographical locations and lots of action. Already having the second book in this series in my possession, I’m a very happy reader.
Read more
2 people found this helpful
Report abuse

GraemeCumming
3.0 out of 5 stars Go Read Me
Reviewed in the United Kingdom on 30 September 2016
Verified Purchase
Every now and then I like to settle down with a beer, snacks and a movie that isn’t going to take a lot of thinking about. You know the kind of thing I mean: an action thriller with Bruce Willis or Arnie – mindless violence, car chases and stunts. The plot isn’t important, it’s the pace and energy that allows you to put your brain into neutral and let the spectacle wash over you. That’s not so easy to achieve with a book, but there are some that come close.
First impressions of The Violin Man’s Legacy are that it falls into that category. There’s action and violence pretty much from the off, and the pace was slick. The concept was good as well, with armed robberies, corruption and Triads combined with forays into Europe, the Far East and South America. So all the ingredients were there.
After the initial burst of action, though, the pace slackened off, largely down to a lot of explanation. From this reader’s point of view, this seemed to be a symptom of the intricate plot and, arguably, an excess of characters. It may have been better to either trim down some of the layers or make the book longer so all the elements could have been shown rather than told about.
In spite of these observations, I did enjoy the story, and will try another. It is the first in a series, and they all seem to have good reviews. My suspicion is that, as the central characters have now been established, the subsequent books will move along more easily.
Read more
Report abuse

Sleepy Jean
5.0 out of 5 stars A Thriller Which Thrills
Reviewed in the United Kingdom on 24 January 2014
Verified Purchase
For a while now I've been an avid follower of Seumas Gallacher's highly entertaining blog, and I really didn't know how the self-effacing writer of posts which are either hilariously funny or deeply compassionate could turn his hand to hard hitting thrillers. I still don't know how he does it, but I do know that he succeeds. The Violin Man's Legacy sets its stall out from the very beginning with an opening chapter to make the hardiest soul wince, but the book isn't all blood and gore. There are parts which are brutal, but this underlines that the bad guys are seriously bad; there are also parts in which we glimpse the deepest thoughts and fears of lead character Jack Calder, and we're privy to a tentative love blossoming as the story progresses. I'm thoroughly impressed with Seumas Gallacher's characterisation. Jack is instantly likeable, and we get to know him gradually just as we would get to know someone in the 'real' world. His relationship with close friend Malky is particularly enjoyable to read, and I recognised the author's trademark humour whenever these two characters were together. Jack's colleagues, the people with whom he interacts and even the bad guys all have strong personalities; and the violin man's identity wasn't what I was expecting at all. The Violin Man's Legacy is the kind of book you want never to end; happily there is a sequel, Vengeance Wears Black, which I've already started reading. Thriller fans: check out Seumas Gallacher's books. You will love them.
Read more
One person found this helpful
Report abuse

Miss R. Wood
5.0 out of 5 stars Seat Belts Required
Reviewed in the United Kingdom on 26 February 2012
Verified Purchase
Right from the start, you know Seumas Gallacher means business! This book is not for the faint hearted. The Violin Man's Legacy is a fast paced, no nonsense thriller which has all the ingredients you could possibly want from an action story. No complicated plot here. The main character - ex SAS man Jack Calder - is instantly likeable and you get to know more about him and his formative years quickly, described with surprising gentleness given the tough introduction.

In a James Bond style plot, the action doesn't let up for a moment. There are plenty of merciless executions, jetting around the globe on the trail of the villains - marvellous scenery descriptions particularly of Hong Kong - and of course there is time for a bit of passion too.

This was a very satisfying first book. I look forward to the next one!
Read more
14 people found this helpful
Report abuse
See all reviews
Back to top
Get to Know Us
Make Money with Us
Let Us Help You
And don't forget:
© 1996-2021, Amazon.com, Inc. or its affiliates