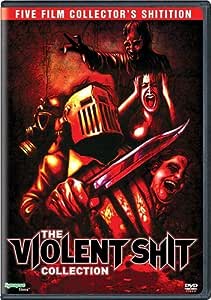 Format: DVD
3.9 out of 5 stars 10 ratings
International product from outside Australia

In 1980s Germany, horror film censorship was a huge problem. The government rarely let classic horror films pass without severe cuts when they were released on home video. To combat this unfortunate situation many German horror fans scraped together a few bucks, rented video cameras & created their own ultra-violent, gory, splatter films. Arguably the most famous of these micro-budget German gorefests are the VIOLENT SHIT films from director Andreas Schnaas. Shot on standard definition video cameras, these films are a sight to behold. Although they are amateurishly made, choppily edited & loaded with ridiculous low-budget gore, these films have an undeniably offensive charm that has kept horror fans entertained for over 25 years! Synapse is proud to present the original VIOLENT SHIT trilogy, along with 2010’s VIOLENT SHIT 4.0: KARL THE BUTCHER VS. AXE on DVD for the first time in North America, now completely remastered by the original owners. Includes the crazy English language dub version of ZOMBIE ’90: EXTREME PESTILENCE on a Bonus DVD with liner notes & additional VIOLENT SHIT 4.0 Bonus Features. SPECIAL FEATURES: The first three VIOLENT SHIT films, remastered by the original owners, plus VIOLENT SHIT 4.0: KARL THE BUTCHER VS. AXE Liner notes from Ted Geoghegan (Screenwriter of NIKOS THE IMPALER, & Writer/Director of WE ARE STILL HERE) Special BONUS DVD, including the English dub version of ZOMBIE ’90: EXTREME PESTILENCE & VIOLENT SHIT 4.0: KARL THE BUTCHER VS. AXE Trailers VIOLENT SHIT The legend of K. the Butcher Shitter is born in this German DIY video roughie, shot on the low-fi Video-8 format. A demented killer escapes the police & leaves a trail of blood & gore in his wake. Newly re-mastered by the film’s original producer. Anamorphic (1.78:1) Widescreen - Dolby Digital German 2.0 Stereo - Subtitles: English (Optional) 73 Mins

RM300
4.0 out of 5 stars Ultra Gory!!!!
6 May 2017 - Published on Amazon.com
Verified Purchase
Until now, I have seen only the first two movies of this set. If you are intersted in this set, you know what kind of movies these are. These first two were shot on poor elements (Video-8 and maybe 8MM?) The transfers are ultra clean and of course I recommend this set!!! Why DVD? Probably a financial concern...
Read more
7 people found this helpful

TS
4.0 out of 5 stars It is what it is. (Which is great if you like this sort of garbage)
9 May 2017 - Published on Amazon.com
Verified Purchase
I've heard about the first two V.S. movies since they came out but I had never really gotten a chance to see them until now. And they definitely lived up to what I've heard/read about them.
While the effects are comically over the top and lack the unsettling technical skills seen in flicks like the Guinea Pig films, it's obvious why they were banned in various countries upon release.
Great fun if you have an open mind and a lowbrow brain.

Caitlin McQuade
4.0 out of 5 stars Violent Shit is a SOV classic for a reason.
3 June 2019 - Published on Amazon.com
Verified Purchase
Germans arguing, brutally killing each other, and some kung fu. Great deal for SOV fans!
Read more
Go to Amazon.com to see all 8 reviews 3.7 out of 5 stars