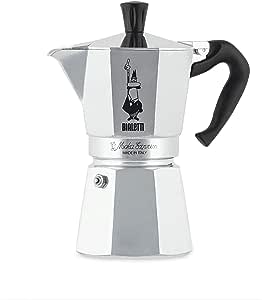 This Bialetti Espresso maker is the original and best way to make authentic espresso coffee in your home. This model makes 6, 2-ounce cups of delicious coffee.

Coffee according to the traditional Italian ritual

How to make a perfect italian coffee

4.6 out of 5 stars
4.6 out of 5
20,457 global ratings
How are ratings calculated?
To calculate the overall star rating and percentage breakdown by star, we don’t use a simple average. Instead, our system considers things like how recent a review is and if the reviewer bought the item on Amazon. It also analyses reviews to verify trustworthiness.

Stephane
5.0 out of 5 stars best coffee maker
Reviewed in Australia on 5 September 2019
Colour Name: Aluminum SilverSize Name: 6 -CupStyle Name: Moka ExpressVerified Purchase
if you drink espresso you know it's the good stuff. to make coffee at home to take on the camping/hiking weekend. just does a great coffee
Read more
Helpful
Report abuse

trish Butterworth
2.0 out of 5 stars Disappointed
Reviewed in Australia on 4 July 2018
Colour Name: Aluminum SilverSize Name: 6 -CupStyle Name: Moka ExpressVerified Purchase
It was far smaller than what I was expecting. I thought a 6 cup size would be able to fill 2 normal size coffee mugs and it doesn't. I realise now that it is the 9 cup size I should have purchased.
Read more
Helpful
Report abuse

mg
5.0 out of 5 stars Works well
Reviewed in Australia on 15 June 2019
Colour Name: Aluminum SilverSize Name: 6 -CupStyle Name: Moka ExpressVerified Purchase
It says 6 cups but it does an excellent job of brewing just one decent sized mug for me. It definitely lives up to its reputation.
Read more
One person found this helpful
Helpful
Report abuse

Bandman
5.0 out of 5 stars Every home should have one
Reviewed in the United Kingdom on 14 July 2016
Colour Name: Aluminum SilverSize Name: 6 -CupStyle Name: Moka ExpressVerified Purchase
Purchased one of these (6 cup) to replace a very well used Gaggia Classic Coffee machine which finally died after many years' use. Reading the reviews of the Gaggia made me realise it would not be worth the expense of buying another. Instead, this coffee maker with its excellent reviews and over 80 years' use by coffee drinkers around the world indicate that this is a real no-brainer. At its price, it is an absolute steal!.

In use, followed the recommendations of throwing away the first few batches by using some Illy that was left after the loss my old Gaggia. It was used on a low heat (gas hob), making sure the flame did not extend around the side of the base. After five minutes, the first treacle-coloured coffee gently and quietly flowed out of the column in the top of the pot (lid up to watch!). Gradually, the colour lightened until nearly clear and a slight gurgling sound heard, removed the pot from the heat. Out of interest, tasted the first sample before throwing away, it had a rather bitter taste. After a couple of samples, made my first coffee to drink, for this used fresh Lavazza Rosa. Followed the same procedure as before but removed the pot from the heat somewhat sooner while the coffee had a brownish tint to it and here was no gurgling sound and waited while the rest of the water was used up. Drinking this coffee was so different from those initial throwaway batches, perfect!. It took just under 5 minutes of gentle heat before the first coffee appeared and then about another minute or so to complete. I would say that it was as good as anything made using the Gaggia machine. At the price it is, one could buy a selection of pot sizes and still have change left over for what an inferior machine would cost.

Additional comments: since having the Bialetti for a while now I thought it would be worth adding a few extra comments. Being used at least once or twice daily, the pot has now acquired a nice coffee discoloration inside, just rinsed out when used. One thing that I think makes the Bialetti well worth having compared to any cheap copies is how well it pours. The spout is very well designed and does not drip at all. Also, the lid fits very well. I have taken advantage of using it with a range of other Italian coffees that are not normally found on supermarket shelves. These include different coffees by Kimbo, Segafredo, Bristot. All of the coffees are enjoyable; I just need to decide which are my favourites as it takes a while to get through about 7 different types without having too many open at the same time. If anyone is interested, I can reply with the link for where I found the coffees.
Read more
180 people found this helpful
Report abuse