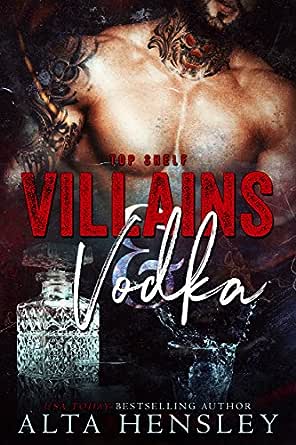 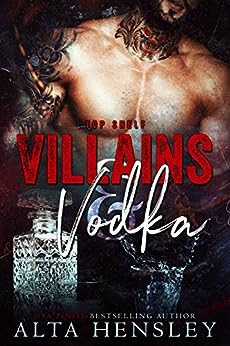 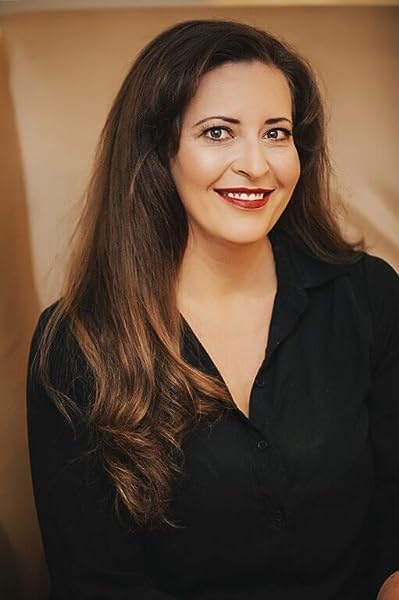 Caroline - Kindle & Koffee Book Blog
TOP 1000 REVIEWER
5.0 out of 5 stars Gotta Love A Tattooed Bad Boy
Reviewed in Australia on 5 December 2017
This is the 2nd book in the Top Shelf series and the one I'd been waiting for, cause who doesn't love a Bad Boy.
And that's exactly what Harley Crow is, bad boy, hired assassin and part owner of Spiked Roses.

Marlowe Masters is a waitress at Spiked Roses who is fascinated and enthralled by the resident Bad Boy and would give anything for him to notice her. She finally gets her wish at the exclusive clubs "Tasting" evening. This is the night that begins this story's twisted and bumpy rollercoaster ride of 2 damaged souls who love to test boundaries and push the limits as far as they can, especially in the bedroom with scenes so hot your kindle may catch fire.
Told from a dual POV we get a good look inside the hearts and minds of our 2 lost souls and find out about the pasts that lead them to where and who they are today. This highly anticipated second instalment didn't disappoint. It kept me on the edge of my seat, turning the pages as fast as I could to find out what happened next. This awesome couple will bury themselves inside your heart without you even knowing.
Read more
Helpful
Report abuse

Toni L
TOP 1000 REVIEWER
5.0 out of 5 stars WOW!!
Reviewed in Australia on 8 December 2017
This book was amazing. I'm not always into bad boy books - some I like, some I don't. But right from the start this book had me hooked. The characters, the story, the twists, the emotion. I got angry & I cried all during this book. It was fantastic! Yes, it's a little dark & gritty but do not miss this book.
Read more
Helpful
Report abuse

Daniella
5.0 out of 5 stars Yes yes yes!
Reviewed in Australia on 26 February 2019
This book was amazing! It follows Marlowe and Harleys story and what a friggen story! You will not be disappointed in this one. I couldn't stop reading!
Read more
Helpful
Report abuse
See all reviews

Liz Castillo
5.0 out of 5 stars Dark And Twisted Romance
Reviewed in the United States on 6 December 2017
Verified Purchase
Who's afraid of the dark and the big, bad wolf?

Marlowe Masters isn't afraid nor does she easily get scared. She thrives in the dark while others cower. Since coming to the Spiked Roses the darkest of the dark has captivated her like no one before. If only he'd notice her.

Harley Crow has always kept to himself because of his chosen profession. And he's never mixed business with pleasure. He's everything dark and demented and he's see no reason to believe change his way now.

Tonight's Tasting Room will bring these two dark souls together. They will share something deep, emotional, and intense. But when the unexpected happens and Marlowe sees just how dark Harley and his life is, will Marlowe stay and embrace the dark? Or will it break her and have her running in the opposite direction, never to look back again?

Marlowe is a strong, independent woman that knows what she wants and isn't afraid to back down from anything. Her life was great growing up, so being strong is the only things she's ever known. So when she first see Harley, there is something about him that calls to her.

Harley never expected to feel the things he does with Marlowe, but he knows the dark, embraces the dark, and loves living in the dark. I love how he doesn't make excuses for the life he has chosen. He knows he messed up when he sees how Marlowe reacts and vows to make things right. Despite the dark that surrounds him, he'll embrace the light he sees within Marlowe.

I am loving this series from Alta and Villains & Vodka is a sensational read that I didn't want to put down. It's dark, demented, exciting, and oh so naughty. The intense emotions contained within these pages is mind-blowing.

Dragonfly
4.0 out of 5 stars Forgiveness? Really?
Reviewed in the United States on 14 February 2019
Verified Purchase
This is a hard book to review. SPOILERS ahead!! I figured out the twist as it was happening. Harley DID state to Marlowe that she would hate him by the end of the week end. What he did was beyond unforgivable. There is the letter of the law (or contract) and there is the spirit of the law (or contract). Harley broke the spirit of the contract while holding to the letter of the contract. Why would Marlowe not believe what was happening was real? Harley was a paid assassin for Gods, sake. He had enemies who would want to hurt him through harming "his woman". If something like that happened to me, I would never be able to forgive the person. Marlowe just caved in after a day. I don't know, I just can't see that happening. I had bought the first two books in this series when they first came out. I don't know if I'll continue. At least not at this point, maybe later. Too many other books on my kindle. Four frustrated stars on this one. ⭐️⭐️⭐️⭐️
Read more
3 people found this helpful
Report abuse

kathy west
5.0 out of 5 stars AMAZING!!!!
Reviewed in the United States on 19 January 2018
Verified Purchase
My favorite Alta Hensley book to date!!
This book was more than I ever expected! Just when I thought I had everything figured out.....EVERYTHING CHANGED!!!!! This book is in my top books of the year!

Harley Crow is an assassin. A killer. The villain. Part owner of Spiked Roses. He has never loved anyone before. He knows that with the way he lives his life, that love cannot be a part of his life.

Men drank booze out of fancy glasses that cost more than I made in an entire month… unless I did a Tasting . The Tasting Room in Spiked Roses and the Tastings that occurred in that room were a different story.

Marlowe Masters works at Spiked Roses. Since she can remember she has wanted Harley Crow. His dark, mysterious ways interagency her. When an opportunity comes to work in the The Tasting Room, a special room at the Spiked Roses, she takes it. Harley is supposed to be there. He never goes to the tastings. This is her chance to get Harley to notice her.

What happens when Marlowe gets the her chance to be with Harley?
Can one weekend change anything?
What happens when things go to far and trust is broken?
Marlowe and Harley have this connection that cannot be broken or can it?
This book was AMAZING!!!! The story line was great. The plot twist was HOLY COW!!!! This book was so much more than I thought it would be. Once I started reading this book I could not put it down. I can tell that Alta put her heart into this book. The scenes are very well written and the characters have great development.
I cannot wait for the next book in this series!!
Read more
2 people found this helpful
Report abuse

Marlowe Masters has reinvented herself from the girl she was, raised by a father that headed up an MC group in Oregon. When she graduated school, she left and never turned back, moving to New Orleans. While she tried to make it playing music, that just wasn’t paying the bills, and with the help of friends, she will get a job waitressing at the Spiked Rose, an exclusive gentleman’s club.

Harley Crow is one of the owners of the Spiked Rose and is a man to be feared. He is a known assassin, a killer, the epitome of a villain. He is heavily tattooed and thrives off of the fear he sees in others.

The club is hosting a Tasting, and they require all the owners to be present at this one whether they chose to participate or not. Harley has never attended before but will appease the other owners and attend. Marlowe has had a secret crush on Harley and will be one of the women who will be available for a contract at the Tasting. She is hoping to catch the eye of Harley Crow.

The plot will have Harley and Marlowe enter into a contract from the Tasting for the “Who’s afraid of the dark?” theme that could include knife play, breath play, ropes, cages, chains, etc. He will push her limits in an attempt to have her safeword, but she surprises him with her stamina for his depravity.

“It’s a balance of control. A wicked game of give and take.”

For Marlowe, she will open up and reveal things about herself she hasn’t told another soul because she feels a deep connection with Harley.

“I had never craved as badly as I did right now. There was absolutely nothing I wouldn’t do for this man. I was at his mercy in every possible way. He was pushing my limits. He wanted to see how far I would go. I would go as far as he took me.”

Dark, evil, and intense are part of the game, and maybe Harley pushed the limits of the game and the contract. The weekend will turn to a life and death fearful situation. When the truth is revealed, the true pain will shatter her.

“My demons danced with his. A morbid tango of torment and terror had occurred that very moment our eyes had locked. He got me. I got him. Flawed in the worst of ways, yet our darkness blended so perfectly.”

The story and sex scenes are explicit and dark. The story also has self-cutting. This is the second book in the series, and next will be Scoundrels and Scotch. This is an ongoing saga, but each story will read as a stand-alone.
Read more
2 people found this helpful
Report abuse

Nonni
5.0 out of 5 stars Alta does it again!!
Reviewed in the United States on 5 December 2017
Verified Purchase
Any book that has you siting on the edge of your seat, your breath held, your insides shivering wondering what the hell the next page will bring is a book that is supberb...Villians and Vodka is such a book. Alta Hensley doesn't just write a story, she weaves a web full of twists and tuns. This book grabs you from page one and holds you hostage until the last page. It is a book that had me cringing and muttering, OMG throughout. It was such a great journey! Don't miss this one and the first in her bestselling Top Shelf series, Bastards and Whiskey. I absolutely can't wait for the next one!!!
Read more
One person found this helpful
Report abuse
See all reviews
Back to top
Get to Know Us
Make Money with Us
Let Us Help You
And don't forget:
© 1996-2021, Amazon.com, Inc. or its affiliates