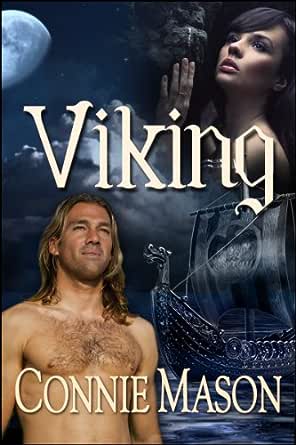 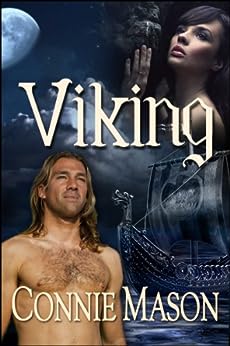 The first time he sees her, the witch is clad in nothing but moonlight and mist. From that moment on, Thorne the Relentless knows that he's been bewitched by the maiden in the bathing pool.

How else to explain the torrid dreams that haunted his nights, the fierce longing?Thorne knew of only one way to combat the witch’s powerful spell – to capture her in a Viking raid and make her his own. But once the deed was done, he found himself still more enchanted by his lovely thrall. Could Fiona be speaking the truth when she claimed it was not sorcery that bound him to her, but the powerful yearning of his … Viking Heart.

Reader
1.0 out of 5 stars RUBBISH
5 August 2015
Format: Kindle Edition
Set in 850AD Thorne the Viking lands on the Isle of Man and sees a beautiful dark haired maiden bathing, she manages to escape him but he cannot get her out of his mind. He returns with more ships to capture the woman, she must be a witch to have enthralled him so badly he intends to kill her and end her spell over him. But when it comes to it he cannot do it, so he captures her and takes her home with him as his slave.

Thorne is betrothed to another woman so when he brings Fiona home Bretta his intended is less than pleased. But Thorne is determined to break the spell Fiona has cast upon him.

What a load of tripe this book is, Fiona is just too good to be true, Thorne like all the other men in this story blaming their own shortcomings on the women. I felt sorry for Bretta Thorne's betrothed I kept hoping her attempts to kill Fiona and Thorne would succeed, no such luck.

Melissa
2.0 out of 5 stars Hero is no hero
18 December 2014 - Published on Amazon.com
Format: Kindle EditionVerified Purchase
Viking could well have been called Barbarian. I know Vikings were Berserkers and that they were quite fierce in battle but the hero in this novel is beyond superstitious to just plain dumb at times. He also lacks honor in many situations.

Thorne spies a beauty on the Isle of Man, Fiona a young islander, and believes he is bewitched by her. He sets off to kill Fiona to end his bewitchment but in the end spares her life. He takes her back to his home country and demands she take her bewitching spell off him. He nearly rapes her the first time he meets her and now that she is his slave he feels he has even more rights over her. Thorne is a brute at times and he allows his men to be brutish too.

Fiona is told by a trusted learned man that Thorne is her future so she does not fight her captivity too hard. Fiona is a healer which makes her even more of a witch. She talks but Thorne does not listen. He simply cannot believe that Fiona has not placed an enchantment on him and others. His deductive reasoning is limited.

Thorne is stubborn and he absolutely cannot recognize danger or the good qualities in Fiona and there are many. She is brave, loyal, and kind. Thorne by contrast is suspicious, impatient and quick to believe the worst in his heroine no matter the source. I could not forgive his actions. I wondered how Fiona could.

The Viking setting is well detailed and this is the best part of this book. Fjord life is wonderfully written. Fiona deserved a wonderful hero in this interesting setting.
Read more
3 people found this helpful

Kindle Customer
3.0 out of 5 stars No romantic tension
6 November 2019 - Published on Amazon.com
Format: Kindle EditionVerified Purchase
Hero is a superstitious viking barbarian who becomes obsessed with a pretty captive so much so he at first plans to kill her to release him from constantly thinking of her She is taken as his slave she asks for marriage before she will be a willing bed partner he immediately marries her Where is intrigue & suspense? I prefer romantic tension leading to marriage Seems like most of H/h interaction is them being naked together in the tub washing each other is boring would like a more interesting storyline
Read more

Regan
3.0 out of 5 stars 3 and ½ Stars - Viking Saga from the Isle of Man to Norway
11 January 2014 - Published on Amazon.com
Format: Kindle EditionVerified Purchase
I struggled with what rating to give this book. I really did. I am a huge fan of Connie Mason’s historical romances and usually give her 4 or 5 stars without blinking an eye. But this one, though it shows the polish of an experienced author, had some negatives that detracted.

Set in 850-851 AD, on the Isle of Man and in Norway, this is the story of Thorne the Relentless, eldest son of a Norwegian jarl, who on his return from plundering the Norman coast, happens onto the village where Fiona the Learned, a healer, lives on the Isle of Man (in the Irish Sea off the northwest coast of England). He would say he was summoned by her siren song and becomes so obsessed with the dark haired beauty he (and everyone else, it seems) believes she has bewitched him. Though Fiona, ever resourceful, escapes his clutches, a year later he returns to “kill the witch” whose memory still plagues him. After plundering Fiona’s village, Thorne is talked into keeping her alive and taking her back to his home in Norway—where his betrothed, Bretta awaits him.

This story has some great characters, including Fiona, who comes across as courageous and wise, and Brann, the wizard from Man. The book reflects considerable research into the origins of the peoples on the Isle of Man, and the plundering habits of the Norse, which I found fascinating. The descriptions of the healing remedies Fiona applied to save lives were also intriguing (and, I suspect, quite accurate). The prologue and beginning are very exciting, too, so I was all prepared for a great story.

But there were some negatives that crept in that kept me from giving it the 5 stars I might have: (1) there was a lot of sex (so much so I lost count of the love scenes and began to think of Thorne and Fiona as rutting rabbits); (2) Thorne was awfully slow to see who she really was and to admire her true character. Instead, he constantly repeats the sentiment she is a witch, which made him seem dense (though she did have powers that seemed to increase as the story went along); and (3) some of it seemed repetitive. The villains (Bretta and her brother Rolo) were also a bit repetitive in their many attempts to “kill the witch.” Still, for all that, both the ending and the Epilogue are satisfying.
Read more
2 people found this helpful

Callie
5.0 out of 5 stars Fiona will have people wanting bad things to happen to her
19 October 2014 - Published on Amazon.com
Format: Kindle EditionVerified Purchase
Thorne the Restless first saw Fiona on the Isle of Mann her home. She is in the moonlight her only clothes.He thinks she is a witch and has put a trance on him. He tries to have sex with her but she gets away in time. A year later he has lost interest in women . His family talks him in to going back to try and find her. He finds her and brings her back with Brann an older man who can see the future .He has told her before of this happening.A lot happens in the book, Thorne is suposed to marry another. He also seems to trust the wrong people. Fiona will have people wanting bad things to happen to her,You will find the usual Connie Mason passion in this book. I liked it as I really like Viking stories.I found it kept my interest . I have read all her books except don'tI read anything with a Western theme.
Read more

Jim Davis
5.0 out of 5 stars I'm totally love this book
26 October 2018 - Published on Amazon.com
Format: Kindle EditionVerified Purchase
This is the best love story from Connie! I'm a great fan of. Her! This book has everything from sexy encounters to love!
Read more
Go to Amazon.com to see all 41 reviews 3.9 out of 5 stars
Get FREE delivery with Amazon Prime
Prime members enjoy FREE Delivery and exclusive access to movies, TV shows, music, Kindle e-books, Twitch Prime, and more.
> Get Started
Back to top
Get to Know Us
Make Money with Us
Let Us Help You
And don't forget:
© 1996-2020, Amazon.com, Inc. or its affiliates