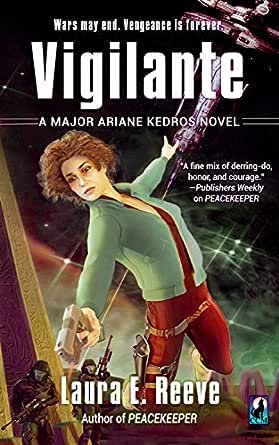 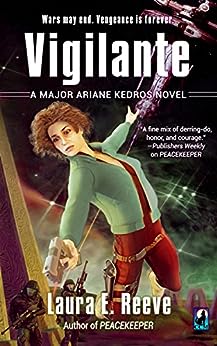 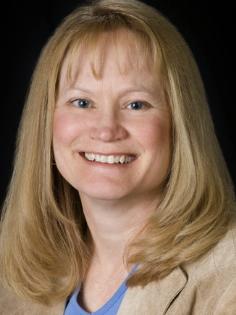 "An excellent debut novel...full of exciting, complex characters in a truly byzantine universe where everything hangs in the balance." -- Mike Shepherd

Laura's civilian jobs have run the gamut from research chemist to software development lead. She holds degrees in chemistry, systems analysis, and spent nine years as a US Air Force officer. She currently lives in Monument, Colorado with her husband, who is her scientific adviser.
click to open popover

Paul Tapner
3.0 out of 5 stars vengeance is mine
Reviewed in the United Kingdom on 15 October 2009
Verified Purchase
Second in a series of military science fiction novels featuring spaceship pilot major ariane kedros. This follows on from earlier book Peacekeeper: A Major Ariane Kedros Novel. Ariane is not actually her real name. She's living under an alias following a disastrous mission that led to the destruction of an entire star and she's still dealing with the guilt from that.

This follows on from the earlier book, and like in that one there's a lot of exposition in the first hundred pages, so you may be better off if you read it first. Even though this one does try to fill in all the information required there's still so much going on that a background to this world via that first novel will come in handy.

Plot wise ariane is caught up in the middle of things when a group of fantatics steal a very powerful weapon, with a mission of destruction in mind. One you get into the middle of that this does become a fair bit of a page turner. There are quite a few supporting characters so the action does flash back and forth between them, but all the action is very believable. Nobody solves anything with amazing powers or skills, they have to deal with the situations at hand using what abilities they have. And that's enough to keep you turning the pages wondering what will happen next.

lb136
5.0 out of 5 stars Turbocharged thriller
Reviewed in the United States on 30 May 2010
Verified Purchase
This superior thriller, the second (after "Peacekeeper") to feature Ariane Kedros, reserve major in intel and "N space" pilot, is relentlessly exciting. It starts out with Kedros, her civilian partner Matt, and Sergeant Joyce, an intel operative, heading back to the system where Kedros and Matt had discovered alien ruins (don't worry about 'em--they're just the McGuffin, at least so far). But do worry about the weapon of seriously mass destruction acquired by a fanatical sect, who want to launch the thing in revenge.

They seize a generational ship, one purpose of which is to install N space buoys ever father out, which allow pilots like Kedros to drop into that space in order to achieve FTL travel.

The tale lurches back and forth between various POVs, as the three humans(to say nothing of a too clever by half AI) get separated, and spymaster Col. Edones launches a rescue mission. Not knowing what each of the others are up to, they developd different strategies of survival, countermeasures, and damage control, which involve two competing human factions (besides the fanatics) and the presence of the alien Minoans (who had brokered a peace between the two factions before the beginning of the series). They were introduced in the first book, and we learn more about them here. And as we do, maybe you'll begin to wonder, as did I, if Ms. Reeve's creation is meant to be a future version of our own universe, or an alternate one. Perhaps in future novels we shall find out.

The tale, like "Peacekeeper," is complete in itself, and the minimal setup for further adventures takes place only in the last few pages. The author, in only her second book, demonstrates amazing skills at scene setting, world building, and military strategy. In short she has accomplished what she's set out to do.
Read more
3 people found this helpful
Helpful
Sending feedback...
Thank you for your feedback.
Sorry, we failed to record your vote. Please try again
Report abuse

Helen J. Keever
2.0 out of 5 stars Vigilante
Reviewed in the United States on 30 December 2010
Verified Purchase
I have been reading SF for 40 yrs and I still couldn't understand what the heck was going on. The text was so filled with military abbreviations that I had trouboe following the story. I read the whole book because I had bought the 3 in the series expecting something like Kris Longknife or Huff's gunnery sergeant. This one has absolutely no sense of humour. I ploughed my way through it but I have no idea of the plot. I don't think I shall even try the next 2. I am sorry that it wasn't my cup of tea because I like a series.
I bought the book from Amazon and hope I can sell it back.
Read more
7 people found this helpful
Helpful
Sending feedback...
Thank you for your feedback.
Sorry, we failed to record your vote. Please try again
Report abuse

Sophia Hogan
5.0 out of 5 stars Love this series!
Reviewed in the United States on 4 March 2011
Verified Purchase
I've always been a big fan of science fiction but lately I have been reading the sub-genre of military science fiction Some of my favorite authors of this genre so far are Elizabeth Moon and Tanya Huff.

The Ariane Kedros series is a thrilling read fully loaded with espionage, double-crossing, and lots of dark secrets. The protagonist, Major Ariane Kedros, is a well developed character that exudes both admirable and flawed characteristics as she confronts her internal demons. Without giving anything away, the series winds its way around many political and social turmoils such as corruption, racial intolerance, and territorial conflicts while confronting intriguing ethical dilemmas such as war crime retribution and redemption. Reeve explores these many societal challenges that can be found in civilizations past, present, and future.

I thoroughly enjoyed the world in which Reeve has created full of fascinating cultures both alien and human alike!

These are just my quick attempts to provide my thumbs up for this book for anyone who loves Military Science fiction. For full story summary, see editorial review.
Read more
2 people found this helpful
Helpful
Sending feedback...
Thank you for your feedback.
Sorry, we failed to record your vote. Please try again
Report abuse

Frances Adrian
5.0 out of 5 stars Wonderful Series
Reviewed in the United States on 3 July 2019
Verified Purchase
This is a great book and a really wonderful series.
Read more
Helpful
Sending feedback...
Thank you for your feedback.
Sorry, we failed to record your vote. Please try again
Report abuse
Load more international reviews

cybermage.se
5.0 out of 5 stars Greeks in space ...
Reviewed in the United States on 25 December 2009
Verified Purchase
Laura is very influenced by her Greek heritage. This time Ari and Matt goes back to the G-145 system they found in the beginning of Peacekeeper. Terran State Prince Isrid Parmet, with family are there too. He who tortured Arianne and blackmailed her to sign a contract for Terran companies to exploit the alien ruins found on a moon in the system.

At the same time it is discovered that a Terran temporal bomb has disappeared, propably stolen.

Also set on G-145 are a cult of isolationists. Their hero Quesan Douchet once destroyed a Minoan ship. The Minoans hunted him down and killed him and made all his relatives barren. Now the isolationists are back for revenge and the fulfillment of his prophesy. They have infiltrated sleepers all over the system when their leader Abrams Hadrian Rouxe take over the generation ship in charge of the temporal buoy.

Another excellent book by Laura E Reeve. Musa 3 might not have as much personality as David Weber's Dahak but she is getting there
Read more
2 people found this helpful
Helpful
Sending feedback...
Thank you for your feedback.
Sorry, we failed to record your vote. Please try again
Report abuse