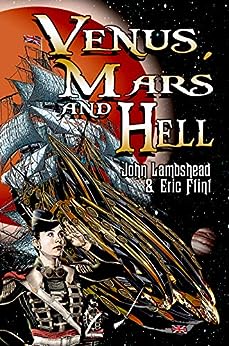 It was difficult enough for the young women from the Pilot’s Academy to fit into the male world of The Royal Navy but, as a new graduate, Sarah Brown expected to be put on the Luna-London shuttle. Instead, she had to guide one of Queen Mary’s warships
across the vast distances between the stars for Captain Fitzwilliam—into the very jaws of Hell. Starships, spirit guides, black magic and the problem of the correct sequence of cutlery usage in the Officer’s Mess.

When Captain Fitzwilliam rescued Sarah from the Exorcists, she discovered he had an ulterior motive, apart from the usual. The Prussian Secret Police had a secret laboratory on Venus experimenting with a spirit-warped disease and Naval Intelligence
needed someone to pilot a secret high-tech flying machine straight into the clouds of Venus. And guess who Fitzwilliam had chosen for the task? An aggressive spirit of a Roman soldier, a love-sick flying reptile, and a fence charged with black magic are merely the start of Sarah’s problems.

In the Matter of Savinkov

Fourteen-year-old Charlotte Luff is excited by her trip to Mars in the company of her admirable father and annoying little brother. But excitement turns into concern and then terror as she discovers herself drawn into the savage secret wars between the Tsar’s secret police, the Okhrana, Russian revolutionary assassins, and Martians with motives of their own.

From Los Angeles
2.0 out of 5 stars Mostly not original
Reviewed in the United States on 3 August 2019
Verified Purchase
The two Lambshead stories are pretty good but are much less than half of this slim book. The Flint story is not bad either BUT it has been printed twice before. Once in a collection of his own stories, Worlds Two, and once in the anthology The Aethers of Mars. I might have purchased this book anyway if I had known (I'm fond of Lambshead's writing and he hasn't published much) but I think that this should have been disclosed.
Read more
3 people found this helpful
Report abuse

David P L
4.0 out of 5 stars A double delight.
Reviewed in the United States on 26 December 2019
Verified Purchase
A fairly long time ago, Ace Books published two short novels in one paperback. This book includes two short novels in different somewhat steampunk settings. The first novel features a heroine who is a "navigator" who can use the spirit world to pilot a spaceship between planets much quicker than other means, but the church has a tendency to consider such witches. This novel is actually made of two longish stories, which are well written and amusing. The second novel involves a Russian agent trying to track a a possible assassin on a passanger liner to Mars, and on Mars. Also well written, with interesting characters.
Read more
Report abuse
See all reviews
Back to top
Get to Know Us
Make Money with Us
Let Us Help You
And don't forget:
© 1996-2022, Amazon.com, Inc. or its affiliates