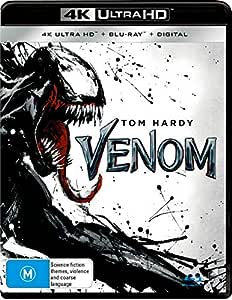 Eddie Brock (Tom Hardy) is a broken man after he loses everything including his job and fiancee. Just when his life is at its lowest, he becomes host to an alien symbiote which results in extraordinary superpowers--transforming into Venom. Will these powers be enough for this new lethal protector to defeat great forces, especially against the far stronger and more weaponised symbiote rival, Riot?

One of Marvel's greatest and most complex characters takes center stage as Eddie Brock ( Tom Hardy) becomes the host for the alien symbiote Venom. Upon investigating one of Drake's experiments, the alien Venom merges with Eddie's body, and he suddenly had incredible new superpowers, as well as the chance to do just about whatever he wants.

The Cast of Venom

The World has enough Super Heros

Curtis
TOP 1000 REVIEWER
5.0 out of 5 stars A fun ride that is a unique take on the superhero genre
16 April 2019
Format: Blu-rayVerified Purchase
Venom is quickly becoming one of my favourite guilty pleasure movies. Its anti-hero story is a fun borderline buddy cop film with Tom Hardy doing double duty as both cops. The dialogue continues to be ever quotable and the action is fun to watch, with several sequences demonstrating the imagination and power of the alien creature.

I recommend this film to any superhero fan, looking for a different take on the superhero origin story.
Read more
Helpful
Comment Report abuse

Shane S.
TOP 50 REVIEWER
4.0 out of 5 stars It's an interesting movie
26 May 2019
Format: Blu-rayVerified Purchase
Tom Hardy's acting is sometimes like watching the bizarre and surreal. The movie is an interesting action flick but it is wierd (good wierd). You're either going to love it or hate it - I hope you will love it.
Read more
Helpful
Comment Report abuse

Amazon Customer
5.0 out of 5 stars Absolutely loved it. Can't wait for the next one.
12 February 2019
Format: Blu-rayVerified Purchase
Wasn't sure what to expect, but I was very pleasantly surprised by this movie. Action aplenty, and a little wry humour from "Venom" just added to my enjoyment.
Read more
Helpful
Comment Report abuse

paul block
5.0 out of 5 stars tops a
8 December 2019
Format: Blu-rayVerified Purchase
one of the best films of 2018
Read more
Helpful
Comment Report abuse

E. A. Solinas
TOP 50 REVIEWER
3.0 out of 5 stars He has a parasite
23 October 2018
Format: DVD
Ah, Venom. One of the most popular antiheroes of the Marvel world - a toothy, oily alien symbiotic creature bonded to a human being.

And despite the fact that Spider-Man is currently grazing in Marvel pastures, Sony went right ahead and created a movie revolving around this character. "Venom" is not a particularly good movie - the first third or so is rather dull, actually - but there's a certain manic, bizarre charm to the overall story that makes it at least interesting to watch. If nothing else, watch it for Tom Hardy's continuously strange performance - the man acts like he's suffering from a case of the flu medicated with Jagermeister.

Eddie Brock (Hardy) is a determined journalist out to expose the Life Foundation and its CEO, the Elon-Musk-like Carlton Drake (Riz Ahmed). What he doesn't know is that Drake's space exploration ventures have brought a number of goopy alien organisms to Earth, and one of them has escaped. After Brock's attempts to expose Drake leads to him losing his job and his fiancee (Michelle Williams), he's contacted by a scientist who promises to show him something truly terrible.

But when he tries to free a woman from a Life Foundation lab, a black goo merges with his body. He starts feeling and acting strangely, and hearing a voice inside his head. Oh, and tentacles sprout from his body.

Yes, one of the alien symbiotes has bonded with him, and Eddie quickly discovers that Venom will take deadly action to avoid being captured by Carlton's thugs... and often just because it thinks mayhem is fun. Unfortunately, Carlton is still looking for the two, and... well, remember that lost symbiote who escaped from him? It's back, and bad things are starting to happen because of it. It will take both Eddie and Venom to save the Earth.

Let's be clear: "Venom" is not a good movie. It's hokey, full of hoary old cliches and has major consistency issues that go blithely unaddressed (supposedly symbiotes are only compatible with certain people... yet one of them hops merrily from person to person with no problem). But it's almost so bad that it's good, because it has some truly baffling creative choices and performances, and becomes weirdly entertaining when the titular symbiote enters the story.

In all honesty, the first part of "Venom" is pretty dull - it's mostly Eddie bumbling around San Francisco and reflecting on his bad decisions, interspersed with Carlton being sinister and egomaniacal as he tries to successfully merge a human and symbiote. Things start getting interesting when Eddie gets gooped, and starts doing things like leaping into lobster tanks to eat raw crustaceans - I'm not sure if wacky black comedy was what director Ruben Fleischer was going for, but he achieved it.

From there onward, it becomes somewhat more interesting with skull-cracking fights, tentacle-filled motorcycle rides, SWAT team attacks, and some baffling writing that never quite makes sense (Eddie refers to Venom as being "up my [butt]"). Most importantly, it becomes a sort of odd-couple movie in which Brock and Venom constantly play off one another, with Venom as the mocking head-biting carnivore whom Brock is trying to keep in check ("No, we do not eat policemen!"), and who is inexplicably won over to the good side by Eddie's... um... something. He's also very invested in Eddie getting back together with Anne.

Tom Hardy's performance in this movie is... utterly fascinating to me. He looks unkept and slightly glassy-eyed, and plays Eddie Brock with a strange lack of direction and a rambling speaking manner, almost as if he's making up his dialogue as he goes along ("My legs were broken, and now they're not broken"). It's like he has mild food-poisoning and is mildly drunk, and trying to act through both. This might be more understandable if this was only how he acted after joining with the symbiote, but... nope. He's like this throughout the whole movie. It's almost mesmerizing how weird he is.

And his weirdness is actually kind of welcome beside the other characters, who tend to be a lot less compelling. Williams is utterly stock as the exasperated "normal" ex-girlfriend alienated by Eddie's Srs Journalism, but who still cares about him, and Jenny Slate is vaguely nervy and twitchy in every line she utters. And Ahmed is so transparently, relentlessly evil that he's nearly fun to watch in his two-dimensional mustache-twirling villainy; you half expect him to tie Williams to the railroad tracks and set fire to an orphanage.

It's predictable, it's cliched, but "Venom" has some eccentric creative choices that are ultimately fun in a perverse way - if nothing else, watch it for the toothy symbiote and his obsession with head-biting.
Read more
2 people found this helpful
Helpful
Comment Report abuse
There are 8 customer reviews and 11 customer ratings.
See all 8 customer reviews
Write a customer review