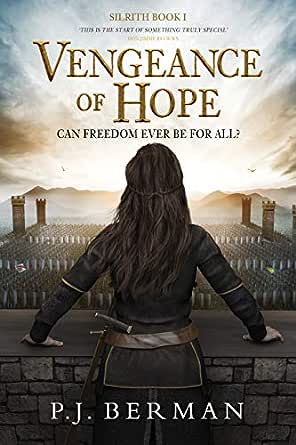 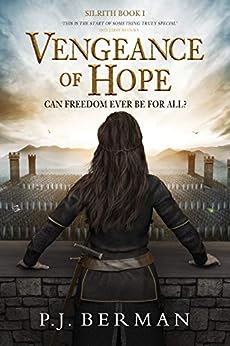 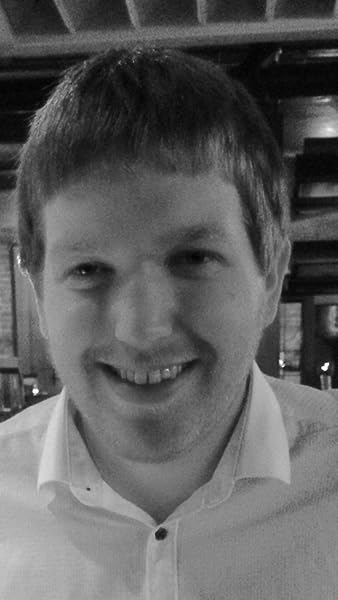 Vengeance of Hope: Can Freedom Ever Be For All? (Silrith Book 1) (Medieval Epic Fantasy) Kindle Edition

Ellie King
4.0 out of 5 stars Exciting and thrilling epic fantasy. Game of Thrones without the magic, dragons and incest.
Reviewed in Australia on 30 December 2019
Verified Purchase
Vengeance of Hope: Can Freedom Ever Be For All?

Vengeance of Hope is the debut novel from P J Berman and is the first installment in the Silrith series. Set in Bennvika, a land on the verge of war overwhelmed by political unease and carnage, we follow the story of three characters as they navigate through the perils of this world. Silrith, the exiled Princess of Bennvika as she fights to protect her people and country; Ezrina, a woman seeking to protect the woman she loves as well as revenge against those that oppress her people and Zethun, a young politician, who is desperate to create a fairer world for the poor.

This series is the definition of epic adult fantasy. The world building is well crafted and you feel like part of it from very early on. The opening of this book throws you straight into the action of this world and the intensity stays present throughout.

This book is full of incredible characters and Berman’s attention to detail is seen everywhere. His ability to create both major and minor characters that demonstrate strength, depth and growth is refreshing and inspiring. Berman has created characters who fight for their beliefs, their people and their lives. Both Princess Silrith and Ezrina show strength and power in their actions as they strive to protect their people.

This book is action packed and I am trying very hard to not leak any spoilers which is hard because SO MUCH HAPPENS! This book reminds me of Game of Thrones in its style and world but I enjoyed this so much more. I would recommend this book to epic fantasy lovers who enjoy accurate and realistic events and reactions. It was refreshing to read a story that dealt with realistic actions and consequences. I am so glad I have an ARC for the next book in the series: King of the Republic because I need to know what happens next.

Kindle Customer
4.0 out of 5 stars Battles, Politics and Strong Characters
Reviewed in the United Kingdom on 15 August 2019
Verified Purchase
P.J Berman's debut is the first of, I hope, many fantasy novels and I am looking forward to getting the second book when it comes out later this year. The book begins with the character of Princess Silrith being blamed for the death of the King and having to learn quickly how to be a war leader on top of being a Princess.

I really enjoyed the political intrigues and the battle scenes, I could see and feel the emotion of the characters which I loved. Having the character of Jostan frame Silrith so he can rise to power made me think of all the coups throughout history that have been pushed forward by greed which brings the story from fantasy into reality for some parts.

Having a lot of characters is pretty normal for a fantasy book and I can see where Berman's heading with the number of characters. They're well written and enjoyable to follow when it's their turn for POV, whether it's reading about the fighting spirit of Silrith, the rebel Ezrina or the politician Zethun who wants a fairer society with more equality. All are strong and able to hold their own but I did find some of the more minor characters difficult to keep track of even with the handy guide. Part of me would have liked for some of them to be introduced in the second book so they could play a bigger part.

The land of Bennvika is used to great advantage although I did find sudden changes of scenery a bit disconcerting, and the other characters in the city, the army and pretty much everywhere else were well written. I can't wait to see what happens next and hope that the characters are as well used and developed as they were in Book 1.

Anyone who likes fantasy, strong characters, political power games and just all out war in their books will not be disappointed.
Read more
Helpful
Sending feedback...
Thank you for your feedback.
Sorry, we failed to record your vote. Please try again
Report abuse

Amazon Customer
5.0 out of 5 stars Compelling Read
Reviewed in the United Kingdom on 20 September 2019
Verified Purchase
Loved this novel. Betrayal, romance, bloody battles, Vengeance of Hope had me hooked right until the end. Can't wait for the next book in series. An all-round thrilling read.
Read more
Helpful
Sending feedback...
Thank you for your feedback.
Sorry, we failed to record your vote. Please try again
Report abuse

Emma McKenzie
4.0 out of 5 stars A great read!
Reviewed in the United Kingdom on 22 March 2020
Verified Purchase
A really great read if you enjoy this genre.
Read more
Helpful
Sending feedback...
Thank you for your feedback.
Sorry, we failed to record your vote. Please try again
Report abuse

C. Bingham
5.0 out of 5 stars Excitement guaranteed!
Reviewed in the United States on 9 June 2019
Verified Purchase
Wow! Looking for book with fast pace and lots of excitement? And throw in strong female characters who truly hold their own with independence and resilience,as well as a cast of characters that keep you guessing about their motives. This is it! A power struggle, and battles for the future of their land, action packed! I personally had a hard time keeping track of all the characters, but the author pre-emptively included a list to help us out. Very much enjoyed this story, look forward to reading it's conclusion in the next book!
Read more
Helpful
Sending feedback...
Thank you for your feedback.
Sorry, we failed to record your vote. Please try again
Report abuse

Diane Kay Gelder
5.0 out of 5 stars New author - give this one a look, you’ll be glad you did!
Reviewed in the United States on 13 January 2019
Verified Purchase
First book in a series, and first from this new author. Vengeance of Hope begins in a moment of change in the Kingdom of Bennvika - the king is dead, and who shall be his successor? The battle of the heirs begins!
I love that Berman’s characters are so varied. Some we are meant to cheer for, but others? Not all of them are all good or all bad, and we do not always know where their allegiance lies. He writes about men and women equally well and places them in vivid settings.
Looking forward to the sequel and to the further tales of this strong women and men.
Read more
Helpful
Sending feedback...
Thank you for your feedback.
Sorry, we failed to record your vote. Please try again
Report abuse
Load more international reviews

Jennifer
3.0 out of 5 stars Potential to be great
Reviewed in the United States on 1 June 2019
Verified Purchase
There's a lot issues I had with this book. POV changes in the middle of chapters, conversations and scenes that didn't seem relevant to the story. The overall flow of the story wasn't that great. I had more questions than answers. I believe it has good bones but needs to be more polished and put together. It does read more like a rough draft.
Read more
Helpful
Sending feedback...
Thank you for your feedback.
Sorry, we failed to record your vote. Please try again
Report abuse