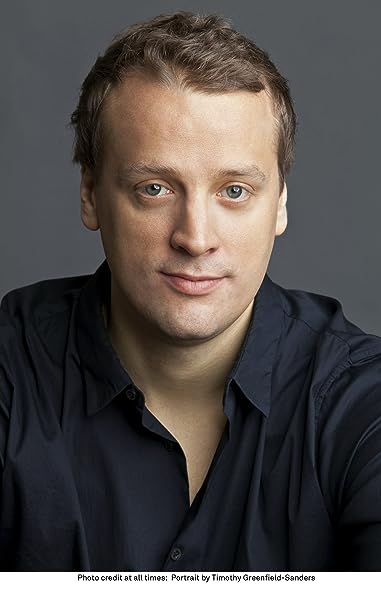 by Charles Finch (Author)
4.6 out of 5 stars 520 ratings
See all formats and editions
Sorry, there was a problem loading this page. Try again.

Praise for The Vanishing Man:

Praise for The Woman in the Water: A cunning mystery.--The New York Times Book Review Finch is an elegant stylist...a persuasive portrait of Victorian England.--The Washington Post "Finch does a wonderful job of re-creating the atmosphere of mid-19th-century England; his characters are crisply drawn and believable. It's wonderful to see the neophyte Lenox develop the skills for which he becomes renowned in later books. An excellent addition to an already terrific series." --Library Journal (starred) "With its splendidly drawn characters and brisk, supple prose, this can be either an inviting introduction to those new to Finch's accomplished series or a winning addition to the canon for established fans." --Booklist (starred) "Lenox has officially reached the big leagues--the conclusion waiting for him is nothing short of chilling. A case with enough momentum to recharge this series and grab new readers with its pull." --Kirkus Reviews

Charles Finch is the USA Today bestselling author of the Charles Lenox mysteries, including The Vanishing Man. His first contemporary novel, The Last Enchantments, is also available from St. Martin's Press. Finch received the 2017 Nona Balakian Citation for Excellence in Reviewing from the National Book Critics Circle. His essays and criticism have appeared in the New York Times, Slate, Washington Post, and elsewhere. He lives in Los Angeles.
Tell the Publisher!
I’d like to read this book on Kindle

4.6 out of 5 stars
4.6 out of 5
520 global ratings
How are ratings calculated?
To calculate the overall star rating and percentage breakdown by star, we don’t use a simple average. Instead, our system considers things like how recent a review is and if the reviewer bought the item on Amazon. It also analyses reviews to verify trustworthiness.

Pauline Lloyd
5.0 out of 5 stars Another page Turner from Charles Finch.
Reviewed in Australia on 26 February 2019
Another wonderful story from Charles Finch. A young Lennox takes a case from the Duke of Dorset with help from trusty Graham. Introducing his cousin Launcelot who is amazingly unpredictable. I hope we see more of him later. A thoroughly good read.
Read more
Helpful
Report abuse
See all reviews

Languedocienne
5.0 out of 5 stars Great second prequel to a lovely series
Reviewed in Canada on 7 March 2019
Verified Purchase
I have read of all the Charles Lennox books and really enjoyed them.. this one is no exception... it is lovely to get some background on the characters and the mystery in this one was quite interesting. I enjoy the gentleness of these stories as well as all the information it provides about Victorian England....
Read more
Report abuse

Carolyn King
5.0 out of 5 stars Great author
Reviewed in Canada on 6 February 2020
Verified Purchase
THIS IS A BOOK i WILL REALLY ENJOY!
Read more
Report abuse

Amazon Customer
4.0 out of 5 stars Worth the read
Reviewed in Canada on 4 February 2020
Verified Purchase
Enjoyed this heroine. I will read more in this series
Read more
Report abuse

catherine lawry
5.0 out of 5 stars A new Lenox book that is a real treat to read
Reviewed in the United States on 28 February 2019
Verified Purchase
I really do not know how these books just keep getting better, but somehow they do.

The Vanishing Man is the second prequel to the Lenox series. I've been reading this series for years, and last year's The Woman in the Water was such a joy to read. This is a series that is so well-written that you truly feel like you're there in Victorian England with the characters. Going back to the beginning to see Charles as a young detective beginning to find his way was just so much fun to read. So I was very happy to hear that The Vanishing Man would be another prequel, and I loved it even more than the previous book.

If you have not read any books by this author yet, I really do recommend starting with at least a few of his older books. Seeing the characters develop over time is so rewarding and makes the prequels even more enjoyable.

I love all of the historical details in these books, but I think the thing I love best is the relationships that the characters have with each other. A lot of the "side characters" add humor but also warmth and humanity to this series.

kkb46
5.0 out of 5 stars This Second Prequel to the Charles Lenox Mystery Series Is Intriguing
Reviewed in the United States on 24 February 2019
Verified Purchase
Charles Lenox, self-created private investigator, has for his newest client none other than the Duke of Dorset, a personage merely one tier below the Crown itself. His Grace has called for Lenox to retrieve a portrait of his two greats grandfather that has been stolen from his private study.
As Lenox begins his investigation into this case, he is beset at home by the visit of a young cousin of twelve named Lancelot, who like many a mischievous boy before him, wreaks his own havoc on the household while gaining the affection of Mrs. Huggins, Lenox’s housekeeper. And, as in the other books in the series, Lenox is aided by the ministrations and perceptions of his valet, Graham. Graham functions both as a sounding board for ideas and as an invaluable sleuth in his ability to search out information in all sorts of places.
In addition to these characters, the main players include Sir Richard Mayne, the head of Scotland Yard, who takes Lenox more seriously now three years after his success in solving the case of the Thames Ophelia; Theo Ward, the private secretary to the Duke, who was a schoolmate of Charles’s; the Duke’s son Corfe, his daughter Violet, and his personal servant Craig; and finally, a mysterious man named Bonden, “an expert at finding things” who teaches Charles a valuable lesson in the detective art of observation.
We also meet again Lady Emma, Charles’s mother; his brother Edmund; and always in his heart his friend, Lady Jane who spends her days in this adventure trying to fix Charles up with all manner of eligible young ladies. It is a happy occurrence to note that the twenty-six-year-old Charles Lenox of 1853 has retained his youthful optimism and sense of humor. He even “cracks” a joke over his breakfast eggs which Graham, in a P.G. Wodehouse sort of way, responds to by calling it “painfully humorous.” And when Jane informs him that she is hoping the Queen will attend her party, Charles tells her to cut the branches of a tree in her garden lest it fall on that august guest.
As the story unfolds, the reader discovers that there is a far more priceless portrait that has not been stolen, and this is the crux of the mystery, for it is supposedly the only known painting from life of the playwright, William Shakespeare. Throughout the novel, as Charles works through the clues, he refers often to a small leather-bound book, given to him by his now late father, of quotations by that author. How does a glimpse of the profile of a young woman of Charles’s acquaintance lead him to the solution of the mystery?
Ever and always the author’s historical research is both insightful and oh, so interesting! This reader learned a new word (or two), “aleatory”, meaning “random” and delighted at a neologism, “afternoonified.”
Charles Finch is a master writer whose Victorian mysteries continue to regale his readers
Read more
19 people found this helpful
Report abuse
See all reviews
Back to top
Get to Know Us
Make Money with Us
Let Us Help You
And don't forget:
© 1996-2021, Amazon.com, Inc. or its affiliates