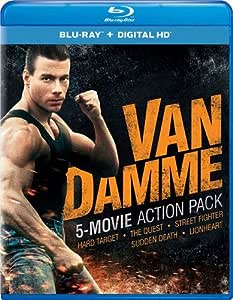 Get ready for hard-hitting action with one of the biggest martial arts stars of all time, Jean-Claude Van Damme, in the Van Damme 5-Movie Action Pack. This adrenaline-pumping collection includes five of his most popular films: Hard Target, The Quest, Street Fighter, Sudden Death and Lionheart. Loaded with nonstop adventure, incredible fight sequences and jaw-dropping stunts, its the ultimate edge-of-your-seat action set!

Vincent Paradiso
5.0 out of 5 stars 5 Van Damme movies in one package! Simply amazing
Reviewed in the United Kingdom on 18 April 2015
Verified Purchase
This 5 blu ray collection is fantastic. It has everything I wanted especially Lion Heart on blu ray. Being a big Van Damme fan this was an easy buy for me. 5 disc Van Damme movies in one package is something you don't find everyday so a fantastic buy. I recommend this to anyone especially Van Damme fans. Great seller. Fast delivery in time from the US. Thanks a lot. A very happy customer here.
Read more

RANDOLPH
5.0 out of 5 stars JCVD
Reviewed in Canada on 9 August 2019
Verified Purchase
A brilliant compilation of JCVD owning the 90’s action genre. A must have for fans of this living legend.
Read more
Report abuse

Stephanie R. Hubbard
3.0 out of 5 stars Acceptable, but some disappointments in lack of improvements from DVD to blueray
Reviewed in the United States on 12 August 2019
Verified Purchase
As for the blue ray set, it was worth it for me being a Van Damme fan, especially of his older films. 4/5 disks played fine and looked acceptable, although a couple were simply direct DVD transfers, without any improvements in clarity. For some reason Sudden Death disk had some annoying glitches, but didn’t prevent me from enjoying the film casually, as I had already seen it. They all played on my blue-ray player, which means it should play on all US players. For the price, it was acceptable, but generally most sets these days include better quality transfers for all disks. Maybe some of the films were never remastered, I’m not sure. I would only recommend this set if you don’t already have these films, especially considering the $40 price.
Read more
2 people found this helpful
Report abuse
See all reviews
Get FREE delivery with Amazon Prime
Prime members enjoy FREE Delivery and exclusive access to movies, TV shows, music, Kindle e-books, Twitch Prime, and more.
> Get Started
Back to top
Get to Know Us
Make Money with Us
Let Us Help You
And don't forget:
© 1996-2020, Amazon.com, Inc. or its affiliates