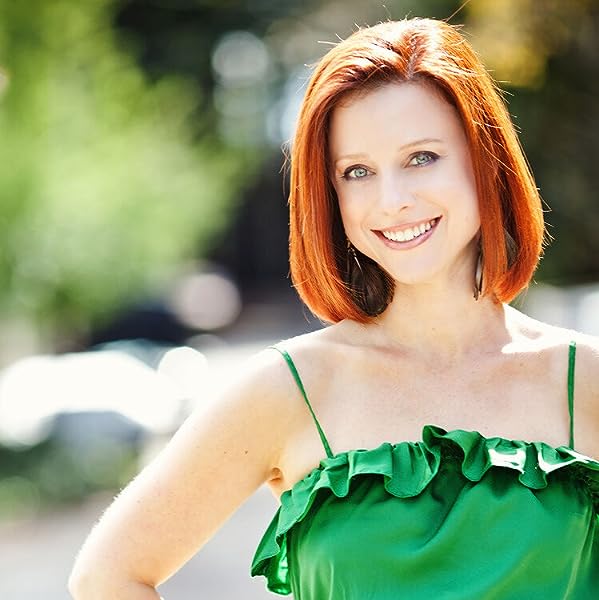 by Stacey Jay (Author)
4.6 out of 5 stars 12 ratings
See all formats and editions
Sorry, there was a problem loading this page. Try again.

Stacey Jay is a recovering workaholic (or at least working hard at recovering) with three pen names, two small children, and a passion for playing pretend for a living. She's been a full time mom-writer since 2005 and can't think of anything she'd rather be doing. Her former careers include theatre performer, professional dancer, poorly paid C-movie actress, bartender, waiter, math tutor (for real) and yoga instructor.

Sammee (I Want To Read That)
5.0 out of 5 stars Loved it!
Reviewed in the United Kingdom on 13 April 2011
Verified Purchase
I am a massive fan of the Megan Berry series so I was really excited to learn this novella was being written. I literately could not wait to get my hands on it so I bought both the ebook and the paperback version!

When we catch up with Megan she is still coming to terms with how her involvement with Cliff has affected her relationship with Ethan, so when she gets a text to meet up with Ethan on Valentine's day she jumps at the chance to make things right between them. But is everything really what it seems...

I absolutely loved it! Megan is such a great character and I adore Ethan, and the mythology behind the series is really, really good. They are always such fun to read, with fast paced action and great character interaction, and this one is no exception. I am always completely sucked into the story and don't want to put it down. At around 80 pages, this can easily be read in one sitting and I enjoyed every minute!

This novella works really well in 'finishing' the story - giving some closure - but at the same time leaving it open for more books in the series. I really do love this series and I really hope sales for this are good. If so, there is the possibility that we could get more and I do hope that is the case. A great addition to an awesome series!
Read more
Report abuse

Paranormal Sisters
5.0 out of 5 stars A great installment for the series
Reviewed in the United States on 23 February 2011
Verified Purchase
Okay, I thought I write a review since it hasn't yet recieved one. If you read the first two,You Are So Undead to Me & Undead Much? I doubt you'll need much encouragement to buy this one. But if you haven't you've got to read the first two or much of this wont make sense to you.

Megan Berry once again lands herself into trouble but you can't blame her, all she wanted to do was to be with him, her one true love. Not wanting to spoil anything for a wannabe reader I'll just say this, there are parts were you want to scream at her, telling her not to go, dont do that but if she dosen't well then there wouldn't be a story, would there?

It's a great continuous to the series. You'll learn more about her just like you did in the second one, though more than she ever wanted to know. You'll love it just like the others. I had to get the kindle for my PC(thankfully its free from amazon) just so i could read and find out what happens next. I hope in the future she'll be able to write more about Megan berry because I just love this series and the whole concept of zombie settlers. I bid her goodluck and encourage you (future buyer) to get this...I promise you, you wont regret it, I sure didn't.
Read more
4 people found this helpful
Report abuse

Carolyn Stewart
5.0 out of 5 stars Love for Megan Berry
Reviewed in the United States on 16 December 2011
Verified Purchase
"Valentine's Day of the Undead", though shorter than the first two Megan Berry novels, is just as good. Kinda reminds me a little bit of espresso. Lots of flavor and action in a smaller size. If you've read "You Are So Undead To Me" and "Undead Much?" you won't be lost at all. If you haven't I suggest you go read them as they're great. Honestly the only downside was how short it was. I love the world that Stacey Jay created with the Zombie Settler series and hope that there is some way we can see more of the Megan Berry books in the future.
Read more
Report abuse

R. Fischer
5.0 out of 5 stars Classic Megan Berry!
Reviewed in the United States on 25 May 2011
Verified Purchase
If you've read the first two books, you'll feel right at home. If you haven't, this is still a fast, sharp and blisteringly-placed read that you'll have no trouble picking up by Page 1.

Valentine's Day of the Undead is a swift and chilling tale filled with family intrigue, betrayal, jealousy and, of course, romance. A satisfying, if brief, conclusion to a great series... and a great way to celebrate Valentine's Day (anytime of the year)!
Read more
Report abuse

Teri
3.0 out of 5 stars :(
Reviewed in the United States on 27 December 2012
Verified Purchase
I have been a fan of this series for about 3 years but I was slightly disappointed with the short story overall because it should have been a full book. Not a miniature version of the usual. I really hope the next book is better.
Read more
Report abuse
See all reviews
Back to top
Get to Know Us
Make Money with Us
Let Us Help You
And don't forget:
© 1996-2021, Amazon.com, Inc. or its affiliates