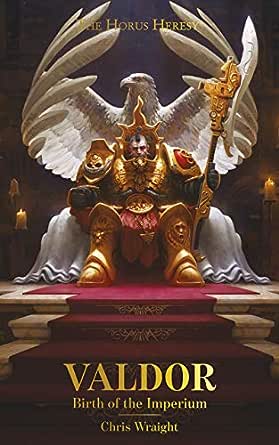 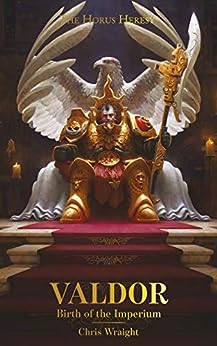 Valdor: Birth of the Imperium (The Horus Heresy) Kindle Edition

Chris Wraight is the author of the Horus Heresy novels Scars and The Path of Heaven, the Primarchs novels Leman Russ: The Great Wolf and Jaghatai Khan: Warhawk of Chogoris, the novellas Brotherhood of the Storm and Wolf King, and the audio drama The Sigillite. For Warhammer 40,000 he has written The Lords of Silence, Vaults of Terra: The Carrion Throne, Vaults of Terra: The Hollow Mountain, Watchers of the Throne: The Emperor’s Legion, the Space Wolves novels Blood of Asaheim and Stormcaller, and many more. Additionally, he has many Warhammer novels to his name, including the Warhammer Chronicles novel Master of Dragons, which forms part of the War of Vengeance series. Chris lives and works in Bradford-on-Avon, in south-west England.
--This text refers to the pod_hardback edition.

4.7 out of 5 stars
4.7 out of 5
209 global ratings
How are ratings calculated?
To calculate the overall star rating and percentage breakdown by star, we don’t use a simple average. Instead, our system considers things like how recent a review is and if the reviewer bought the item on Amazon. It also analyses reviews to verify trustworthiness.

Kindle Customer
5.0 out of 5 stars The Captain-General takes centre stage.
Reviewed in the United Kingdom on 23 April 2020
Verified Purchase
Chris Wraight's, 'Valdor: Birth of the Imperium', is a novella that I have been looking forward to reading for a very long time. #valdor is one of my favourite characters from the Warhammer 40k universe and this is the first novel where he takes centre stage.

Set at the end of the Unification Wars on Terra, it's not so much an origin story, but more a glimpse into the captain-general's mind at a certain point in his life. Valdor is already 'old' at this point. He has fought by the Emperor's side for over a century. Surprisingly, he has a lot less page time than I expected but captivates whenever he does appear. He also has the best lines and moments which every warhammer fan will remember for years to come. Personally I found the quiet moments with Valdor the most interesting. It is here that we get a deep insight into what it means to be a custodes. This question lies at the heart of the story.

There are a number of supporting characters, each of which make for fascinating characters in their own right, considering the little space and time we get with each. By far the most interesting is Kandawire whose interactions with Valdor are the hightlight of the book, and whose own goal is justifiable.

In terms of setting, the entire novella is set amid the foundations of the Imperial Palace. Having recently read 'The Lost and the Damned' and 'The First Wall' in the Siege of Terra arc, it was fascinating to see the Imperial Palace durimg its construction from the skelethon of the Lion's Gate to the Imperial Dungeon and the original purpose it served. Most of the novella takes place during a storm. A fitting event considering the book is chock-full of answers to questions that have teased warhammer fans for decades.

'Valdor: Birth of the Imperium' is a must read for all 40k fans. Considering the mahor success of the Horus Heresy, I really hope that they continue to explore this earlier period in subsequent books.

Amazon Customer
4.0 out of 5 stars Great Pre-Heresy, Pre-Great Crusade & Pre-Astartes tale
Reviewed in the United Kingdom on 27 February 2020
Verified Purchase
I became disillusioned with the Horus Heresy series due to the repetition, lack of advancement, & unnecessary cash-cow stories (although I’m sure many people would have enjoyed each book, depending on their preferred Legion etc, & there were some great books).

Despite that, I had high hopes for this book as I’m a fan of Valdor, the Unity Wars & the Thunder Warriors. And.......it doesn’t disappoint.

It contains an interesting take on the character of a “young” Valdor, a relatable protagonist with good intentions, an insight into opinions on the new “Imperium” and it’s next steps, and Thunder Warriors (nuff said). And more, but I won’t spoil it.

Also, it’s a nice compact little hardback, which I didn’t expect. And the cover art is great as you can see.

One star taken off because, at only 200 pages, I wanted it to be longer. Not sure if there’ll be any direct sequels, but I hope so.

Kaisercam
2.0 out of 5 stars Not so much about Valdor or the birth of the Imperium
Reviewed in the United Kingdom on 17 July 2020
Verified Purchase
Like most WH40K fans I am always on the lookout for pre-great crusade lore. I have never found the character of Valdor to be particularly interesting but the story setting is. If Valdor does hold a fascination for some buyers they will be severely disappointed. He barely appears in a book titled with his name. A few scant pages of dialogue and some musings towards the end, attempts to explain his world view and doubts about the nascent Imperium's future. There are a few fleeting clues into the persona of the Emperor that tie in with previous entries, which is welcome but odd given the limited nature of this stand-alone book. The first half is irritatingly vague with characters obliquely discussing people and events in coded terms; like listening to one half of a telephone conversation. That aside, the events boasted in the back cover blurb would in reality encompass at least 6 similarly sized books. Most of the key moments have already passed or are spoken of instead of being witnessed by the reader. There is some more insight into the fabled Thunder Warriors. Perhaps too much, as some previous Astartes designations and structure is applied to them, which to me ruins their mystique and distinctiveness somewhat.

***Minor Spoilers***
Another let-down is the now standard template character construct: The Strong Willed Female (SWF). For readers of newer WH40K books this is a familiar trope. A hitherto totally unheard of female character holding a position of power who is able to stand-up to, disrespect or circumvent the most dangerously powerful figures in the Warhammer universe, but are still admired and liked by said demi-gods; who would usually imprison or kill anybody else for such impertinence regardless of their position. Chris Wraight doubles down by introducing two such characters who eventually betray the Emperor's vision. Treachery is nothing new in WH40K but most betrayals come from ambition, greed, falsehood and ego. Not so in this title, as both SWF's (independently but simultaneously) are working from an altruistic and benevolent (if uninformed) sense of duty, yet seem naive to the nature of the Imperium and its leader. The explanation for their perfidy is rather silly when put under a microscope as is the authors circuitous reasons for letting them run loose for so long and their individual fates are something from a Hollywood movie. As with most modern novels, these one-off but central female characters are overcompensated for in the virtue and defiance department. In a dog eat dog, bleak universe where dogma, discipline and obeisance are the norm, this is especially jarring. There are good female characters in Warhammer, Inquisitor Amberley Vail, Alivia Sureka, Iaeo and Uwe Bajola to name a few but recent trends dictate that newer personas must be exemplars rather than realistic. After the twentieth such iteration it becomes trite and predictable. Why invest in a new character when they are all the same?
Read more
Report abuse

Mr. S. Y.
5.0 out of 5 stars Surprisingly thin on Valdor-centric action but still a great read
Reviewed in the United Kingdom on 10 October 2020
Verified Purchase
For a book seemingly about Valdor the focus constantly shifts to other points of views and characters in the fledgling Imperium of Man, however it all ties up nicely and really makes it clear what his role and the role of others in the early Imperium were. Hints are left towards things such as the Primarch project and the scattering. Well worth a read for one of the rare glimpses into the Unification Wars!
Read more
Report abuse

Dave Prince
5.0 out of 5 stars A glimpse at the early part of the Imperium
Reviewed in the United Kingdom on 27 May 2020
Verified Purchase
I enjoyed this book - had a good pace, and gave a rare glimpse at the early days of the Imperium, and one of the more interesting characters. Well worth a read, and matches the "Primarch" hardcover series, which is a bonus.
Read more
Report abuse
See all reviews
Get FREE delivery with Amazon Prime
Prime members enjoy FREE Delivery and exclusive access to movies, TV shows, music, Kindle e-books, Twitch Prime, and more.
> Get Started
Back to top
Get to Know Us
Make Money with Us
Let Us Help You
And don't forget:
© 1996-2020, Amazon.com, Inc. or its affiliates