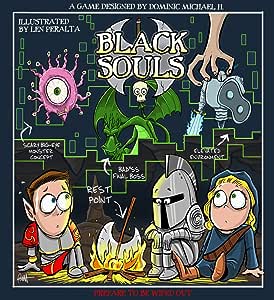 Brand: Medieval Lords
4.7 out of 5 stars 3 ratings
Secure transaction
Returns Policy
Amazon-managed Delivery
Your transaction is secure
We work hard to protect your security and privacy. Our payment security system encrypts your information during transmission. We don’t share your credit card details with third-party sellers, and we don’t sell your information to others. Learn more
Amazon-managed Delivery
Amazon manages delivery by using preferred couriers/agents. Order delivery tracking to your doorstep is available

Designer Inc.'s latest video game title Black Souls has achieved international success! Hailed as one of the toughest digital games ever, it has attracted millions of hardcore gamers. The secret behind this huge success lies not in just making an extremely difficult game. Anyone can do that. The true challenge lies in balancing it to be as difficult as possible, but still fair enough that the very best players can survive to the end. Alas, the game studio is heavily short staffed and the management is looking to hire one more Game Designer for developing more content in Black Souls.

kevin bg
4.0 out of 5 stars A great game in need of another edition
Reviewed in the United States on 24 July 2019
Verified Purchase
I picked up this game strictly based off the fact its premise was hilarious and it played off my favorite video game series.

I was pleasantly surprised to find that it was not just a gimmick or something to display but never dust off- But rather a fairly easy to learn game that borrows some familiar concepts and puts it into a unique format.

Theme: The theme is pretty terrific- You are designing a game that needs to be aesthetic, HARD- but not too hard- Ideally having a single unit surviving the level with a pile of bodies left behind. You also are playing to achieve specific criteria to match the play testers preferences. If you satisfy the play testers dark souls itch enough, you get hired!

Gameplay: This reminded me of more though provoking version of Kodama with a dark souls theme. Every player starts with the same team of heros and then drafts using numbered cards in their hands that also have additional effects. As you get these tiles you place them into your design space(though you have to start in either the upper left, bottom left, or middle right. The cards you play may let you add tokens to your selections and more units to your party as you go. You then ultimately work your way through the level you just created, hoping to kill off most of the group but still have them finish the level. At the end you are scored on how well you did that, as well as how many tiles had matching scenery, as well as the secret and public objectives you met. Whoever did the best- Wins!

Fun Factor: I found the game to be quite fun. Not something I would label as an instant classic, but something I think is far superior to similar games. Even though I just got it, I already know I will be pitching it to people based off the premise alone for a few games.

Cons: I don't want to be too harsh here, since there was clearly love put into this game, and there is a degree of polish to certain elements- But this game desperately needs a second edition where some of the errors in the games production are fixed.

Most jarringly, the cards that get the party the titular black souls, are a whiteish green on the card, which had us thinking at first that it was a wild card card where players could select whichever color of units they wanted. Even if it wasn't extremely confusing it is kind of embarrassing and a definite aesthetic fail.

The rule book also has issues- While it generally conveyed the rules well, there are a few parts that are overtly wrong, such as a objective card that is different in the book when compared to the card and has already caused some new player confusion.

The reference cards really needed the summary of what each token did on them as well, as there are a decent number of them.

Also I found a blank tile and considering the other production issues I am left wondering if it should be a tile with something on it, or if its a mistake, an unfortunate state to be left in with a game.

Conclusion: However you will notice all my complaints have to do with the components as opposed to the game itself. For what it is, it is a great time and I am rooting for the game not against it. If you like what you read here, kodama, or Dark Souls, I think this is still a buy.

nhgkr777
5.0 out of 5 stars good
Reviewed in the United States on 18 November 2019
Verified Purchase
good
Read more
Report abuse
See all reviews
Get FREE delivery with Amazon Prime
Prime members enjoy FREE Delivery and exclusive access to movies, TV shows, music, Kindle e-books, Twitch Prime, and more.
> Get Started
Back to top
Get to Know Us
Make Money with Us
Let Us Help You
And don't forget:
© 1996-2020, Amazon.com, Inc. or its affiliates