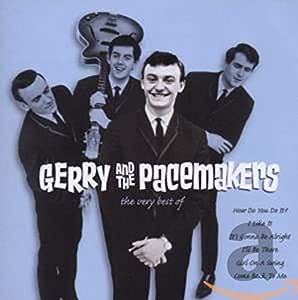 Secure transaction
Your transaction is secure
We work hard to protect your security and privacy. Our payment security system encrypts your information during transmission. We don’t share your credit card details with third-party sellers, and we don’t sell your information to others. Learn more
Details
Ships from
Amazon UK
Sold by
Amazon UK
New (9) from
$13.31 FREE Delivery on first order.

This CD brings together all the 'A' sidesfrom Gerry's EMI singles from 1963 to 1966plus a selection of other recordings from the mid-Sixties and seven titles that showcaseGerry Marsden's talents as a songwriter. It's an infectious, good-humouredsound, a fitting reminder of one of Liverpool'sfinest talents and greatest bands.

4.6 out of 5 stars
4.6 out of 5
471 global ratings
How are ratings calculated?
To calculate the overall star rating and percentage breakdown by star, we don’t use a simple average. Instead, our system considers things like how recent a review is and if the reviewer bought the item on Amazon. It also analyses reviews to verify trustworthiness.

Doc Culbard
4.0 out of 5 stars An excellent group with music emanating from their prime.
Reviewed in the United Kingdom on 16 January 2021
Verified Purchase
The CD was bought from the Speedyhen seller. As usual with this seller, the package arrived before the specified date, was as described by the seller, and was adequately packaged - including the cellophane wrapping around the CD (not to be taken for granted - even with new CD's).
The music on the "The Very Best of Gerry and the Pacemakers (Repack)", is a compilation of all of the memorable music that this group has provided. Of particular note in exciting the hearing were some of the old favourite, e.g. "Ferry Across the Mersey", "You'll Never Walk Alone" (how could this one be forgotten?), "I'll Be There", and "I Like It". But there are also many others on the disc that were completely familiar, including "Girl On A Swing", "How Do You Do It", "Walk Hand In Hand", and "It's Alright". The music brings back a vision of the Sixties that is hard to forget in the field of popular music. This CD brings together all of the "Side A" songs from the groups Parlophone Records' singles from 1963 to 1966, plus a selection of the recordings from the mid-Sixties. Some of the songs showcase Gerry Marsden's talents as a songwriter, music that is described as "infectious and good-humoured".
It would be true to say that Gerry and the Pacemakers were never forgotten as one of the prime Liverpudlian pop groups, all the more so with the recent death of the lead singer, Gerry Marsden. They may not have gained the favouritism attained by that other Liverpool group, "The Beatles", but they retained their image and popularity, and the voice of Gerry Marsden was at least the equal, and better than most, of any that the Liverpool pop scene produced.
The quality of the singing on the CD is very good, especially the range and projection of Marsden's voice. The sound of the band is a little "boxsy" - perhaps to be expected of rock band sounds from the Sixties, even with re-mastering of the recordings. However, the depth and width of the orchestral accompaniment on a number of the songs is most acceptable and adds to the quality of the recordings. Remastering and repackaging of recordings by other popular soloists, e.g., Roy Orbison, Elvis Presley, Queen, are proving to be somewhat of a revelation.
There are a number of single and double CD's of the music of Gerry and the Pacemakers on the market. For numbers and range of songs, quality of the CD and its very low price, this makes this CD as good a record of the band as could be expected. Do not hesitate to buy as it is highly recommendable, and not just for the voice of the late Gerry Marsden.
Read more
Report abuse

Terri Marsden
5.0 out of 5 stars All the Hits
Reviewed in the United Kingdom on 4 December 2020
Verified Purchase
An excellent compilation containing all the hits. I'd forgotten some of them and was pleased to hear them again. A few of Gerry's compositions later in his career are included, and don't really amount to much (IMHO), but they don't detract from this highly enjoyable album. YNWA.
Read more
One person found this helpful
Report abuse

stuart hanna
5.0 out of 5 stars Great 60`s music -some of them are gems!
Reviewed in the United Kingdom on 8 February 2021
Verified Purchase
This collection of the late Gerry Marsden and the Pacemakers songs is superb.
The classics we all know and love are here/ Ferry cross the Mersey and Don`t let the sun catch you crying both bring a lump to my throat, and a tear to to my eye.
There are also" a "sides of singles that i have never heard before, some of them very catchy, and all containing Gerry`s distinctive tones.
Great value!
Read more
Report abuse

les manion
5.0 out of 5 stars All the hits and more happy memories of the sixties
Reviewed in the United Kingdom on 14 October 2018
Verified Purchase
Gerry and pacemakers we're the first Mersey group to have a number one hit with how do you do it they were a very accomplished group j saw them live a few times in the sixties they made some good records including i like it.ferry across the Mersey.and you'll never walk alone all on this CD plus many other great songs really good CD for the price I paid for it
Read more
3 people found this helpful
Report abuse

Frenshard
5.0 out of 5 stars Great!
Reviewed in the United Kingdom on 6 February 2018
Verified Purchase
Great. All the really good stuff is here.
Read more
5 people found this helpful
Report abuse
See all reviews
Back to top
Get to Know Us
Make Money with Us
Let Us Help You
And don't forget:
© 1996-2021, Amazon.com, Inc. or its affiliates