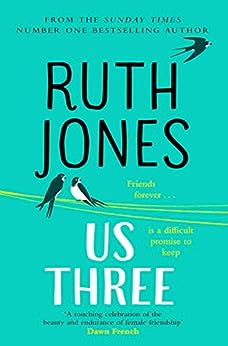 Jones's trademark warmth and humour suffuse the novel with comedy and pathos, making for a heart-warming, entertaining and, at times, deeply moving story ― The Observer

A poignant novel about friendship and forgiveness . . . with fantastic characterisation, as you'd expect from the co-creator of Gavin & Stacey, it's an epic journey ― Woman & Home

Us Three is a warm, smart, uplifting tale of true friendship. I loved Lana, Catrin and Judith - I was genuinely sad to leave them when I turned the final page. ― Beth O'Leary, bestselling author of THE FLATSHARE

A touching celebration of the beauty and endurance of female friendship. There is nothing mightier. Fact. ― Dawn French

This novel oozes warmth and honesty. A big-hearted book that provides a cast of characters you'll lose your heart to. ― Adele Parks

This moving story of three Welsh friends-for-life . . . balances warmth and humour with bleakness and despair. Another winner for Gavin and Stacey star Jones ― Daily Mail

A funny, moving and uplifting novel ― The Sun

A funny and warm tale of friendship ― Evening Standard

I loved spending time immersed in Catrin, Judith and Lana's lives . . . A contender for my Books of the Year list ― Prima

A wonderfully warm, funny, totally engrossing and unputdownable novel about friendship. A gorgeous treat. ― Kate Eberlen, bestselling author of MISS YOU --This text refers to the hardcover edition.

Ruth Jones is best known for her outstanding and award-winning television writing, most notably BBC 1's Gavin and Stacey, which she co-wrote with James Corden and in which she played the incorrigible Nessa Jenkins. The most recent Christmas Day special of Gavin and Stacey gained national critical acclaim, drawing an audience of over 18 million, winning a BAFTA for TV moment of the year and a National Television Award for Impact, and gaining an RTS nomination for Ruth's performance. Ruth also created and co-wrote Sky 1's Stella, which ran for six series. As well as being Bafta-nominated for her role as the eponymous Stella, Ruth has also starred in several other television comedies and dramas.

Her debut novel Never Greener has now sold over a quarter of a million copies. It was chosen as WHSmith Fiction Book of the Year 2018, was a Zoe Ball Book Club pick, and was a Sunday Times bestseller for fifteen weeks, three weeks at number one. Us Three is Ruth's second novel and was a Sunday Times bestseller in hardback. --This text refers to the hardcover edition.

A funny, moving and uplifting novel about life's complications, the power of friendship and how it defines us all, from Ruth Jones, co-creator of Gavin & Stacey and author of the smash-hit, number one bestselling debut, Never Greener. --This text refers to the hardcover edition.
Read more

4.5 out of 5 stars
4.5 out of 5
4,551 global ratings
How are ratings calculated?
To calculate the overall star rating and percentage breakdown by star, we don’t use a simple average. Instead, our system considers things like how recent a review is and if the reviewer bought the item on Amazon. It also analyses reviews to verify trustworthiness.

carinya
4.0 out of 5 stars Friendship
Reviewed in Australia on 21 February 2021
Verified Purchase
Four stars for Ruth Jones, this is such an enjoyable read. The easy flowing script was full of great characters. This is a book that makes the reader feel content and happy. Well done Ruth.
May there be many more books to come.

Marina
5.0 out of 5 stars Best book I’ve read this year!
Reviewed in Australia on 10 December 2020
Verified Purchase
A wonderful book - Ruth Jones was able to make the reader feel that the three characters were real and travelled on their journey through their lives in Wales with them. Can’t wait for her next book!
Read more
Helpful
Report abuse

Daniel
5.0 out of 5 stars A fabulous read from Ruth Jones
Reviewed in Australia on 25 December 2020
I managed to get a copy of Us Three through the wonderful NetGalley, and I absolutely loved it. This story of three girls who declare themselves best friends forever, but find that vow severely tested through to adulthood, picks them up at different periods of their lives and explores the joy and tears of their shared bonds.

I ended up buying copies of this as gifts for a couple of my friends, and thoroughly recommend Ruth Jones' writing which will have you in tears of laughter and of grief

Kate C
5.0 out of 5 stars Beautiful
Reviewed in the United Kingdom on 10 September 2020
Verified Purchase
Let me start by saying I loved Ruth’s debut novel Never Greener so when I saw she had a second book coming out I preordered it immediately.
Lana, Judith and Catrin have been friends since the innocence of primary school where they swore they would always be there for each other.
This book then takes us on a journey of honest, real, relationships. Specifically female friendships. Born in a similar time to the 3 female leads in this book I could completely see myself in each of the characters at different stages in the book and I adored each of them so I couldn’t put this book down.
Their life and friendship takes us through, love, loss, happy, sad and major milestones in friendships from births, deaths, marriages, divorces, christenings, and all of the parties in between.
Can three girls who swore on a Curly Wurly wrapper as children really always be there for each other no matter what?
Needless to say sometimes real life gets in the way....Ruth expert tells the story of real friendships with fantastic humour and compassion and I would recommend this book to anyone.
More please Ruth! X
Read more
28 people found this helpful
Report abuse

Sharon Jane
5.0 out of 5 stars Us Three Ruth Jones
Reviewed in the United Kingdom on 5 September 2020
Verified Purchase
Heart warming, tear jerking, funny. Ruth Jones has done it again, even better than Never Greener which I'm a huge fan of. A beautifully written story about friendship, love, life and loss. Please write another book so on Ruth :)
Read more
15 people found this helpful
Report abuse

MEW
3.0 out of 5 stars Annoyed!
Reviewed in the United Kingdom on 30 October 2020
Verified Purchase
Although I enjoyed reading this most of the time, I was annoyed with the storyline for the rest of the time! Please be warned, spoilers to follow if you haven’t read the book yet. The story is supposed to be about three girls and their strong bond of friendship throughout their lives, from the age of five...and how, through their ups and downs, they would be loyal and support each other etc etc.....but they didn’t! Two of the girls didn’t speak to each other for thirty years! The whole focus of the book, including the title, gave the impression and expectation of how they would cope with, and deal with life’s struggles together, and how their strong friendship would get each of them through it.....but that just didn’t happen at all. Even the epilogue was the story of how they promised on a Curly Wurly wrapper, when they were 9 years of age, to stay ‘best friends forever’ and ‘always be there and true’......well that didn’t actually happen! And the reasons it didn’t happen weren’t good enough! Disappointing for me.
Read more
10 people found this helpful
Report abuse

Janet Ferguson
2.0 out of 5 stars Prepare to Be Disappointed ...
Reviewed in the United Kingdom on 16 October 2020
Verified Purchase
Compared to Never Greener, I thought this book was poor. I only persevered because I hoped it would suddenly take off. I thought the characters were underdeveloped and thus, the friendship was not plausible. They were portrayed as if Ruth Jones was aiming for the thirteen to fourteen year old readership market. Equally, in many instances the plot was predictable and heavy handed. I won’t be reading a third book by Jones which is a shame as I very much enjoyed Never Greener and ordered this book on the strength of that.
Read more
11 people found this helpful
Report abuse

Annabel
3.0 out of 5 stars An easy read.
Reviewed in the United Kingdom on 2 October 2020
Verified Purchase
Bought the book as a download for my Amazon kindle, which always arrive in super fast time! I suggested it to my two "bessie mates" from school as I thought it might be similar to our friendships, i.e we met at school over 50 years ago. Absolutely not! Although one part was very similar. It's an easy read, even easier if you read it to yourself in a Welsh accent! I liked the fact it was in three parts and you weren't totally bogged down with the minutiae of the girls' friendships. Nice short chapters, which kept you going to the next to see what happened until time or sleep stopped you from reading. Yes, I would recommend if you like a simple book, but I don't think I'll be drawn to any other Ruth Jones' books.
Read more
8 people found this helpful
Report abuse
See all reviews
Back to top
Get to Know Us
Make Money with Us
Let Us Help You
And don't forget:
© 1996-2021, Amazon.com, Inc. or its affiliates